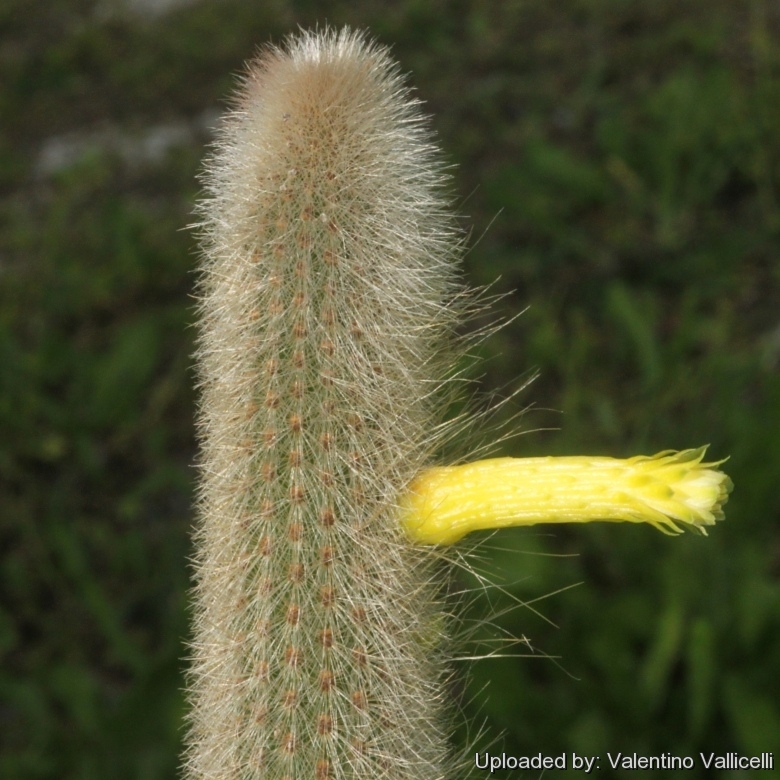 Origin and Habitat: Yungas region and Inquisivi provinces, on both sides of Río La Paz in La Paz, Bolivia.
It grows: It grows at elevations of 1,000 to 1,100 metres above sea level.
Habitat and Ecology: It grows in Yungas forests near the La Paz river. This species is common within its restricted range.

Description: Cleistocactus ritteri is a shrubby columnar cactus, branching basally with more or less erect branches, over 1 metres tall. It has attractive bristly soft spines and lemon yellow blooms.
Stems: Slim, erect or arching, bright green, to 1 metre tall, 2-3 cm in diameter.
Ribs: 12-16.
Areoles: Close set, at first dark brown becoming greyish white.
Central spines: 5, yellowish, to 1 cm long.
Radial spines: As many as 30, fine, hair-like white up to 3 cm long (mostly less than 1.5 cm long). The dense spination it possesses, which serve to protect it from the harsh sun common to its native habitat. More precisely the spines benefit the plant by reducing sun exposure and by trapping a layer of air next to the cactus body. This helps to cool the plant in the summer and keep it warm in the winter.
Flowers: Pointing sidewards or slightly downward, slightly bent, greenish yellow to lemon yellow, to 4 cm long with green stigma lobes.
Fruits: Globose, yellow, to 1.5 cm in diameter. 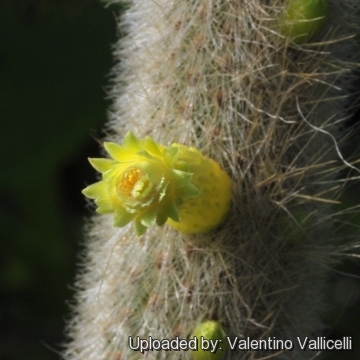 Cultivation and Propagation: Cleistocactus ritteri is a a much decorative hardy cactus.
Soil: Grow it in a rich and particularly draining substratum, as it is very sensitive to rottenness when in presence of humidity and low temperatures and let the soil dry out between waterings.
Water: In summer, during the vegetative period, it must be regularly watered, but allowing the substratum to completely dry up before irrigating again; in winter, it’s to be kept dry. Preferable not to water on overcast days, humid days or cold winter days.
Hardiness: This is one of hardiest of the woolly columnar cacti from Bolivia that grow at an altitude of up to 1000 meters. It is a frost resistant cactus, hardy to -7°(or even less if very dry). However in cultivation it is better not to expose it to temperatures lower than 0° C, even if in an aerated and protected location, in order to avoid the formation of anti-aesthetic spots on the epidermis. In presence of high atmospheric humidity avoid any frost as it is particularly sensitive to root rot.
Exposure: It need full sun exposures with ample airflow to produce dense hairs, but, as a former mountain dweller, does not care for extremely high temperatures in summer.
Maintenance: Repot in the spring, when their roots become cramped. Generally, they should be repotted every other year in order to provide fresh soil. After repotting, do not water for a week or more.
Use: Excellent as landscape or patio plant. It is suitable for small “desert” gardens, in association with other xerophytes. Where the open air cultivation is not possible due to the climate, it is to be cultivated in pot in order to shelter it in winter.
Propagation: By seeds and by cuttings, provided left drying up well, in summer.