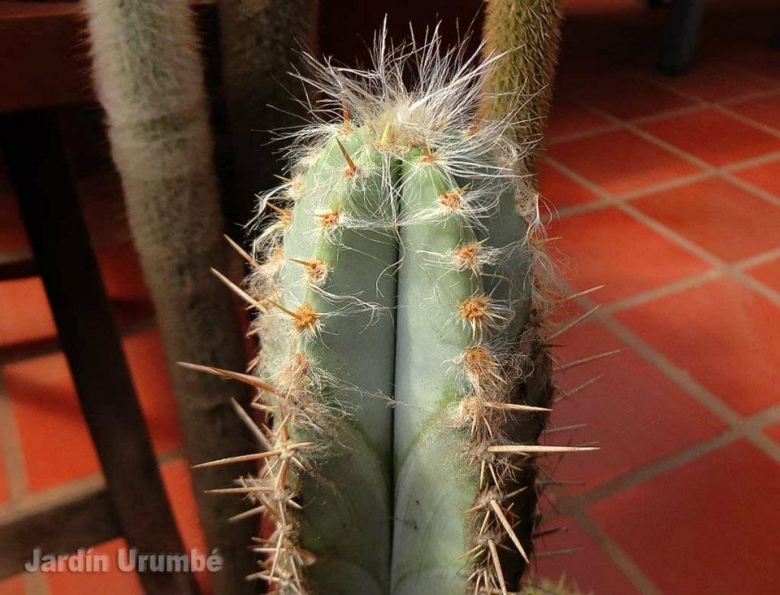 Description: Pilosocereus glaucescens is a controversial cactus species, based on the invalid cactus name Pilocereus glaucescens described by Labour in 1853 (nom. inval., Art. 43.1). The type described in the middle of the last century had been lost and Werdermann (1933) used the name P. glaucescens for populations included within Pilosocereus pachycladus. The true identity of this species remains uncertain and most authors have dismissed Pilosocereus glaucescens as perhaps not worthy of even specific status. Most plants in cultivation under this name are Pilosocereus pachycladus.
Habit: The following description of this species is mainly based on old literature, Förster (1847), Britton & Rose (1920) and Werdermann (1939). Pilosocereus glaucescens is an erect, branching plant with beautiful frost-blue rounded ribs, somewhat inflated, close-set areoles with numerous whitish bristles and hairs. Few cacti have this wonderful colour. The apex of stems bears short, yellowish spines and pretty closely tight white wool. In their native Brazil, these cacti grow to the size of a small candelabra-like tree up to 6 meters high and as wide and in summer are covered with white flowers developing from a white woolly cephalium at stem tip. Grown indoors in containers, they slowly form upright columns to 1.2-2 metres tall and develop branches, but rarely flower.
Stems: Erect, 8-10 cm in diameter by about 6 m in height at first simple, later strongly branched, dark bluish grey, glaucescent particularly in the new shoot.
Ribs: 8-10 rounded, blunt, inflated, about 1.5 cm high, separated by sharp sinuses, with age becoming effaced toward the base of the stem.
Areoles: Quite large and close together ( about 1 cm apart), almost confluent toward the base of the stem, rounded, with short silver-grey almost black tomentum, furnished with hairs and very abundant, fine, undulating, weak, white bristles about 1 to 2 cm long, especially on the areoles recently developed and toward the summit of the stem, rarer on the lower areoles.
Spines: Radiating, of different lengths and thicknesses, biserial, the exterior (radials) 10-13(-18), fine, transparent, yellowish to brownish, straight, divergent, inserted to the number of 5 or 6 (or more) on each side of the areole, about 5-15 mm long, the lower longest. The interior (centrals) 5-7, stouter, disposed irregularly in the centre, clearly distinguishable from the radial spines, dull yellow or grey-yellow, at the base somewhat thickened and brown, about 10 to 15 mm long,
Flowers: From a pseudocephalium (clesely set white woolly areoles) that develops on one side of the branches, about 6-7 cm long,. Ovary wide and flat, about 5 mm long and almost 2 cm in diameter, outside nacked and shiny green. Tube about 3.5-4 cm long, cylindrical, slightly enlarged outward above, glaucous olive-green with bracts up to 1.5 cm long, inside whitish. Stamens, fused for about 2 cm to the tube at the base, becoming free only in the upper part. Filaments white. Anthers pale yellow. Innermost stamens, closely set against the style. Style about 4 cm long, white, strongly tapering upwards, with 12 white, stigma-lobes about 3 mm long, slightly
spreading.

Cultivation and Propagation: Pilosocereus glaucescens is a much decorative tree-like cactus seldom found in cultivation. It grows well and is a vigorous growers, and is possible to increase the speed of growth to some extent by providing adequate amount of water, warmth, and an all-purpose liquid fertilizer diluted half strength during the active growing season, but it’s susceptible to rotting if too wet. It likes a sunny position also blasting sun in summer. If grown indoor provide 4 to 6 hours, or more, direct morning or afternoon sun. It should be watered regularly in Summer and kept drier in Winter. It like pots with generous drain holes, need a very porous, slightly acidic potting medium (add pumice, vulcanite, and perlite). It can be grown outdoors in frost-free climates, needs anyway to kept above 12 °C and dry in winter. But it can tolerate temperatures down to 5° C (or even 0° C) for very short periods if very dry and ventilated.
Maintenance: Repot every two years.
Remarks: Do not use fatty products (like horticultural oil, neem oil, mineral oil, and insecticidal soaps) that can fade and ruin the characteristic blue colouration of the epidermis!
Propagation: Seeds or cuttings.