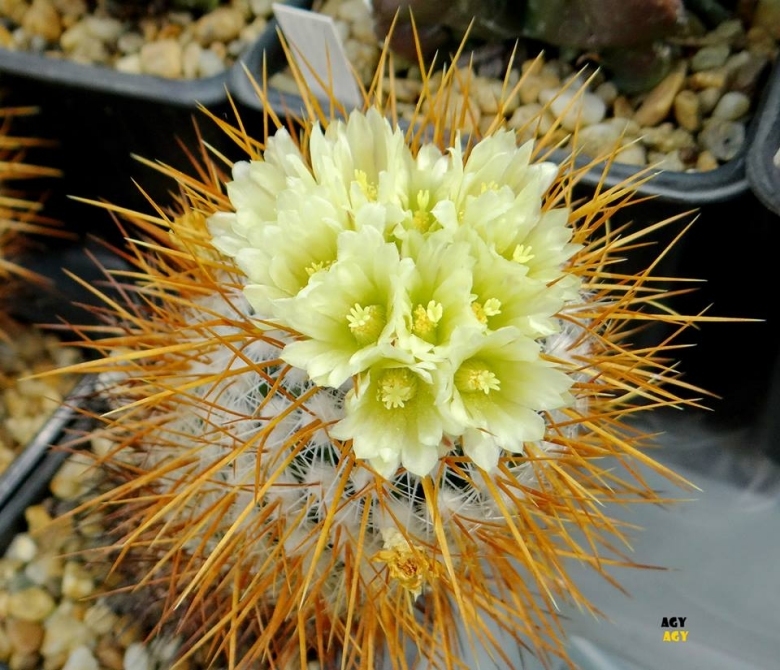 Origin and Habitat: Mexico (San Luis Potosí and uncertian in the state of Hidalgo)
Habitat and Ecology: The species occurs in desert scrub.

Description: Stenocactus albatus is a well-known in horticulture cactus species with a pale green epidermis, denser and thinner white/yellow spines and yellowish flowers. However its classification is controversial and all available informations about this taxon can only be described as contradictory, and most of the the plants labelled Stenocactus albatus don’t fits at all the original description of Dietrich, and some of which may correspond to other species.
Habit: Usually solitary (or occasionally branching after injury to the apical bud).
Stem: 10 to 12 cm. in diameter, glaucous, depressed-globose, spherical that may elongate with age, with white-woolly apex covered with spines.
Ribs: Approx. 35 slender with sharp, flat, undulating, depressed at 1,5 cm intervals where areoles appear.
Radial spines: About 10 to 25 bristle-like, silky, whitish to cream-coloured almost transparent, 1 cm long, and partially erect, from one to three may be missing from upper areoles.
Central spines: 4 much thicker, longer, and usually darker yellow to tan coloured, straight except for the uppermost one, which may reach 5 cm of length, flat, and often annulate, terete, porrect or curved backward.
Flowers: Small funnel-shaped 2 cm long with light yellow (or whitish), lanceolate perianth segments.

Subspecies, varieties, forms and cultivars of plants belonging to the Stenocactus vaupelianus group 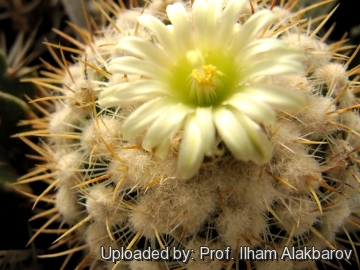 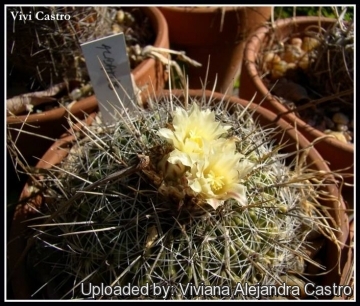 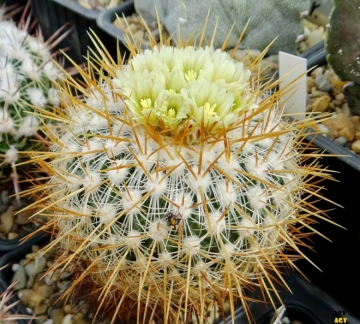 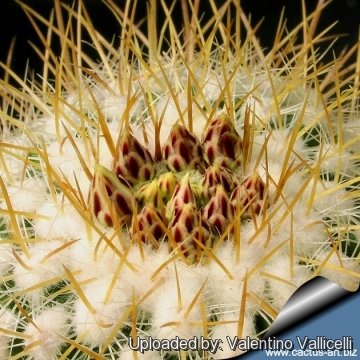 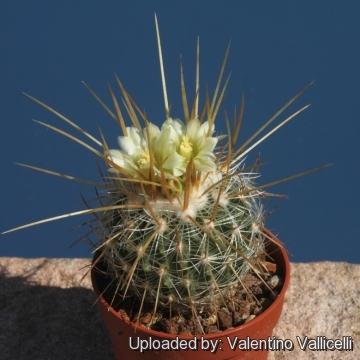 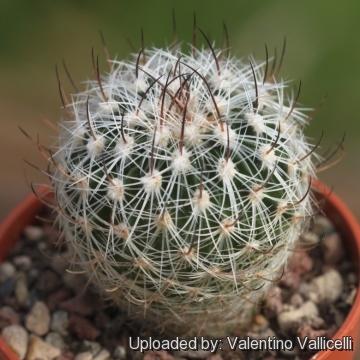 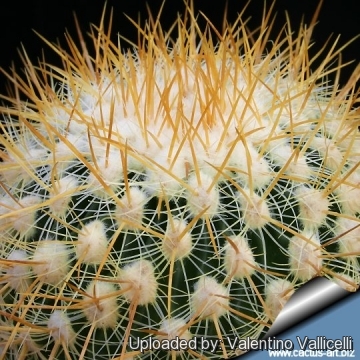 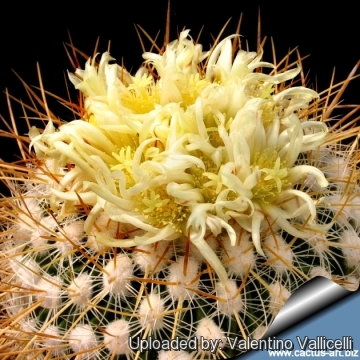 Cultivation and Propagation: Small growing and easy to to care and flower. Because of it’s small size makes a great potted plant specimen, great for beginning collectors.
Growth rate: It is a slow growing species.
Soil: It grows well in a very draining mineral potting substrate, but it isn't picky about soil.
Repotting: Use pot with good drainage. Eventually, as they become mature, they attain a maximum size of 8-10 cm (20) cm. However, old plants become senile and have a tendency to succumb to disease and a weak root system. At this stage, as is well known, they die suddenly. So, after they reach 10 cm in diameter grow them slowly, and adopt a new repotting period, using intervals of every 2 - 3 years. Additionally grow them under drier conditions or with stronger sunlight.
Watering: Water regularly during the summer so long as the plant pot is allowed to drain and not sit in a tray of water (It rots easily, especially if over wet). Let dry between watering. During hot weather you may need to water the plants more frequently so long as the plant is actively growing. From late September watering should be reduced to force the plant to go in to a state of semi dormancy, by October you should be back in to the winter watering regime. If the soil is allowed to be dry for too long root loss could follow but equally the same result would occur if the plants are both wet and cold. From March onwards the plant will begin to grow and watering should be increased gradually until late May when the plant should be in full growth.
Fertilization: Feed with a high potassium fertilizer in summer. Feeding may not be necessary at all if the compost is fresh then, feed in summer only if the plant hasn't been repotted recently. Do not feed the plants from September onwards as this can cause lush growth which can be fatal during the darker cold months.
Hardiness: When dormant, the plant is very cold tolerant (down to nearly -5° C or less), but when left out it is more sensitive to frost. During the summer it is best to keep the plants outside where the temperature can rise to over 30 C with no harm to the plant.
Exposure: They do need a lot of light to develop their typical spination, but different clones vary in their tolerance of full sunshine. However some protection in light shade is recommended during the hottest hours in summer. If kept too dark they may become overly lush and greener and could be prone to rotting due to over watering.
Uses: It is an excellent plant for container growing. It always looks good and stays small. It looks fine in a cold greenhouse and frame.
Rot: Rot is only a minor problem with cacti if the plants are watered and “aired” correctly. If they are not, fungicides won't help all that much.
Propagation: Seeds (usually), remembering that seedlings dislike strong light and dry conditions and need to be repotted frequently, or by the shoots of adult plants (if available). If you remove an offset, remember to let it dry for some days, letting the wound heal (cuttings planted too soon easily rot before they can grow roots). Lay it on the soil and insert the stem end partially into the substrate. Try to keep the cutting somewhat upright so that the roots are able to grow downward.