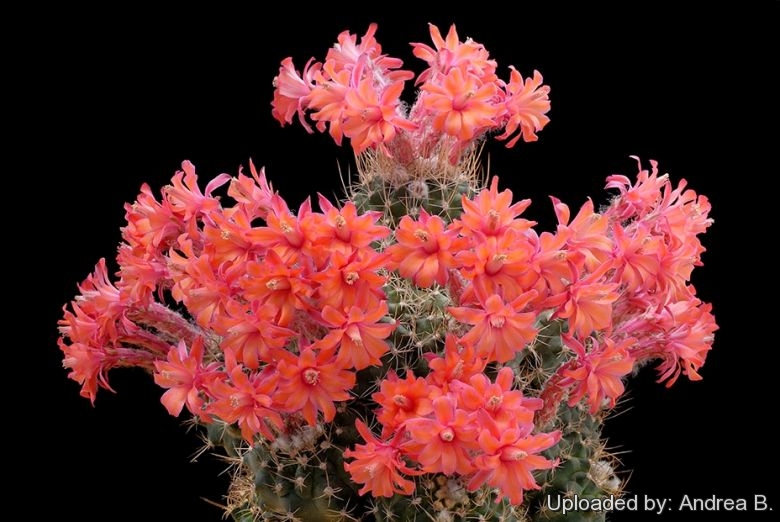 Origin and Habitat: Matucana krahnii has a relatively restricted range and is found only in Chachapoyas, North of Balsas, San Vicente Peru (Extent of Occurrence is 1,500 km2). There are more than five known locations (all in the Amazonas region).
Altitude range. This species grows at elevations of 800-1750 metres.
Habitat and Ecology: M. krahnii is usually solitary, but relatively common where it occurs. It grows in dry forest. In spite of its use as an ornamental plant, the population seems to be stable.

Description: Matucana krahnii is a nice little clustering cactus that has a large wonderful bright red flower. This plant was described by John Donald in 1979. It is also known by its synonym Matucana calliantha, a name given to it initially by Ritter.
Derivation of specific name: The epithet 'krahnii' has been bestowed in honour of Wolfgang Krahn, German cactus collector, travelled in Peru in the 1960s together with Paul C. Hutchison.
Stem: Flattened globular to globular up to 6(-8) cm in diameter and basally clumping, grey-green, with about 18 flattened ribs more or less resolved into conical to round tubercles.
Radial spines: 8 dark brown.
Central spines: 1-4 black, brown-tipped 0.5- 1 cm. long, later up to up to 6-8(-9)cm long and weakly twisted.
Flowers: Zygomorfic tending to lean on one side, diurnal, deep red and lilac coloured, about 7-8 cm long and 5.5-7 cm across.
Blooming season: Throughout late Spring or early Summer in several flushes over a long period.
Related species. Matucana krahnii is closely related to Matucana madisoniorum and Matucana paucicostata, and some clones will make fairly large clumps relatively rapidly. It freely offsets like Matucana paucicostata but tends to have larger softer greener bodies, with long relatively weak twisted spines, but this species shows its superiority when flowering.

Subspecies, varieties, forms and cultivars of plants belonging to the Matucana krahnii group 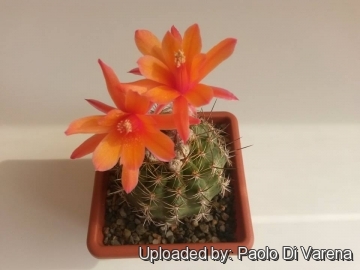 Cultivation and Propagation: It is not very hard to grow if protected from freezing temperature they needs care in cultivation to reach a good size without developing unsightly marks, need a minimum temperature of 10° C, but may survive a light frost. It benefits from a good light but not severe sunlight.
Grow in rich, porous cactus compost and let their soil dry out between waterings and water less in winter. Needs good drainage
Repot in the spring when their roots become cramped. Generally, they should be repotted every other year in order to provide fresh soil. However, this doesn't necessarily mean they'll need larger containers. After repotting, do not water for a week or more.
Propagation: Seeds or division, by detaching and rooting the little plants around the mother.