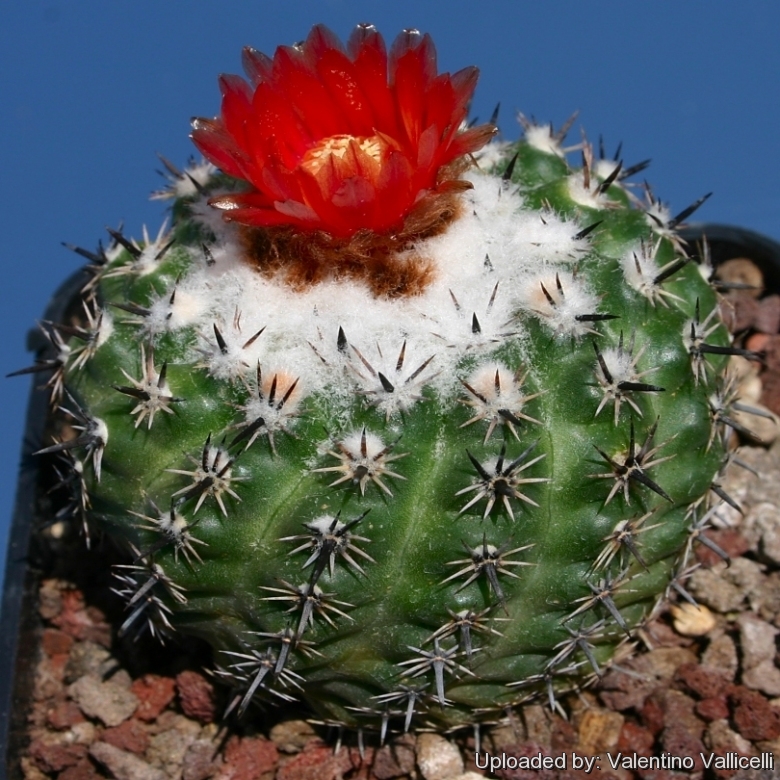 Origin and Habitat: Native to Bolivia, Chuqisaca (Culpina, Cinti) Parodia subterranea has a relatively restricted range (its extent of occurrence is 1,200 km2)
Altitude: It grows at elevations of 2800 to 3600 metres above sea level.
Habit: The species grows in puna grassland with very stony ground and little vegetation cover. The climate conditions are dry, with scarce rains. During the dry time, the plant bodies tend to retract and hide into the ground.
Note: The indigenous word "Puna" indicate the western region up to 4500 m that extends from the Peru, going throughout Bolivia to the Argentinian North. Delimited at west by a costal chain of high volcanic picks and by the Cordillera mountainous chain to the east. The Argentinian Puna is the natural continuation of the Bolivian highland.

Description: Parodia subterranea (also found in cultivation as Notocactus occultus) is an amazing white-topped cactus species from Bolivia that reputedly grows almost completely hidden below the soil (in habitat) and is extremely hard to find unless it is in bloom. The flower colour is usually red, but can be quite variable.
Habit: Usually simple or rarely basally branched.
Stem: Flattish to globose, 6-12 cm in diameter, dull green to olive green with white wool apically, thick and growing mostly underground, but the plant's stem in cultivation is usually globular or ovoidal and aerial.
Ribs: 11-13 spiralling, forming distinct conical tubercles.
Areoles: Young areoles are filled with abundant white wool. Later they are naked.
Central spines: One (or sometime as many as 4), short, thick black, clawlike, more or less erect, straight or hooked and twisted (depending on population), 7-14 mm long.
Radial spines: Up to 10, radiating, more or less flattened against the plant's body, mostly whitish or yellowish (but also blackish), 5-8 mm long.
Flowers: Funnel-shaped, usually red (but ranging from yellowish-orange to dark purple), about 3 cm wide.
Pericarpel and floral tube covered with white or brown hairs and black bristles. Dried flowers remain for a long time on the plant's body after blooming.
Blooming season: Late spring.
Fruit: Red or green, with white hairs.
Seeds: Purse shaped, black.

Subspecies, varieties, forms and cultivars of plants belonging to the Parodia subterranea group 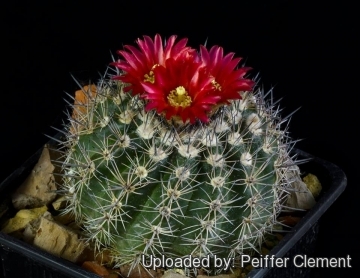 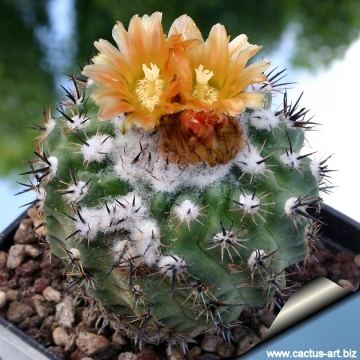 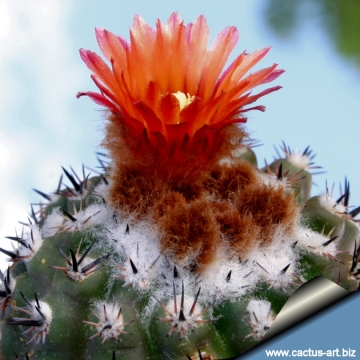 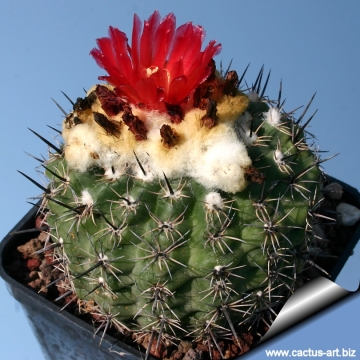 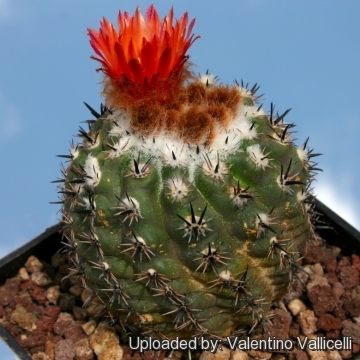 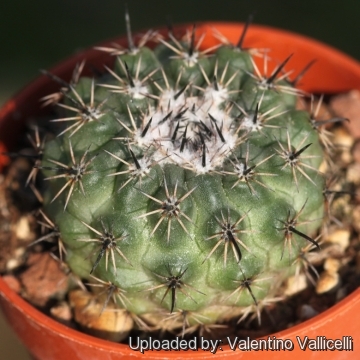 Cultivation and Propagation: Water these plants regularly, and fertilize them with a low nitrogen fertilizer every 6 to 8 weeks, from mid-spring to late summer. This plant should remain rather dry at other times (especially in winter), except for a quick, periodic misting on warmer days in late winter. If it is kept absolutely dry for a long period, it tends to lose its roots in winter. It can tolerate light frost (- 4C°) but rots easily if wet and cold.
If the local climate is warm enough to grow this plant outside, be sure that soil is well drained and sun is full, but with protection from strong midday rays.
Propagation: By Seeds that are very fine.