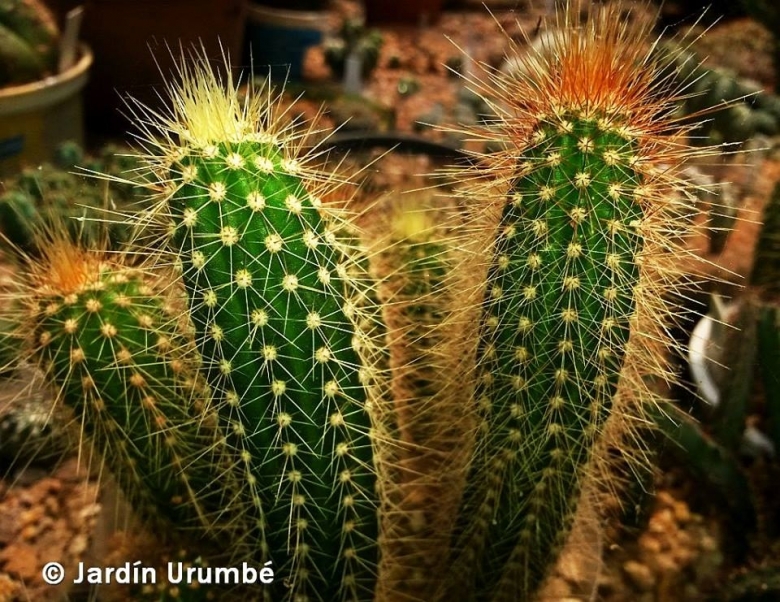 Description: Borzicactus samaipatanus var. divi-miseratus ['divimiseratus'] is one of the morphological or local forms of Cleistocactus samaipatanus distinguished for slightly stouter and more erect stems, dark-greyish, bristly, breakable spines and slightly longer flowers up to 6 cm long. However it is hard to name it accurately without knowing where it comes from, and the two plants are not readily distinguishable, if not for the geographical provenance. More likely they are one and the same species.
Stem: Columnar tapered toward the point, slightly branched near the base, 40-70 cm high, forming loose groups.
Ribs: About 15, very low.
Areoles: 3-4 mm apart, 3 mm in diameter, bulged, above with light brown hairs, below with greyish hairs.
Spines: 13-18, at first reddish or yellowish, becoming grey-blackish as they ages, spreading downward from the bottom of the areola, needle-shaped, very thin, intertwined, unequal and brittle.
Flowers: Numerous, at the apex of shoots, red, longer than the type, about 6 cm long.

Cultivation and Propagation: Borzicactus samaipatanus var. divi-miseratus is of easy culture, which makes it a good cactus for beginners.
Soil: Use a loose well drained cactus mix.
Repotting: Since they are rapid growers need plenty of space for their roots, repotting with fresh potting-mix should be done every other year or when the plant has outgrown its pot. However, repotting doesn't necessarily mean they'll need larger containers.
Sun Exposure: Require filtered bright light, partial sun or light shade, but not in full sun that will sunscald it.
Watering: They require moderately watering through the growing season. This can be done weekly or more frequently during the summertime, if the weather is sunny enough, but allow to dry fully before watering again. Kept this way, plants will show a healthy growth. Keep rather dry as soon as the temperature starts dropping in October and keep it dry in winter. The plant survives outside without protection in winter (cold hardy to -2° ) but is then somewhat prone to rot, too.
Fertilization: Give an occasional high potassium liquid feed during the active growing period.
Hardiness: Winter care presents no problems at temperatures from 5 to 15 degrees centigrade with plenty of light, but frost hardy to -2°C for short periods if very dry. This plant needs a period of cool rest in winter to produce flowers abundantly. It flowers freely indoors too if conditions suit it.
Pest and diseases: They are generally fairly easy to grow, especially if kept pest-free. They are susceptible to, scale insects and spider mite. Watch carefully for infestations of stem and root mealy bugs, and damage from these may well initiate fungal attack.
Propagation: Easy to propagate from cuttings or seeds. Take cuttings spring or summer, let them dry till the ends callous well. Then replant them in fresh cactus soil that is ever so slightly moist, and keep it that way till they root. Surface sowing is the best; seeds germinate in 14-28 days at 20° C , remembering that seedlings dislike strong light and dry conditions.