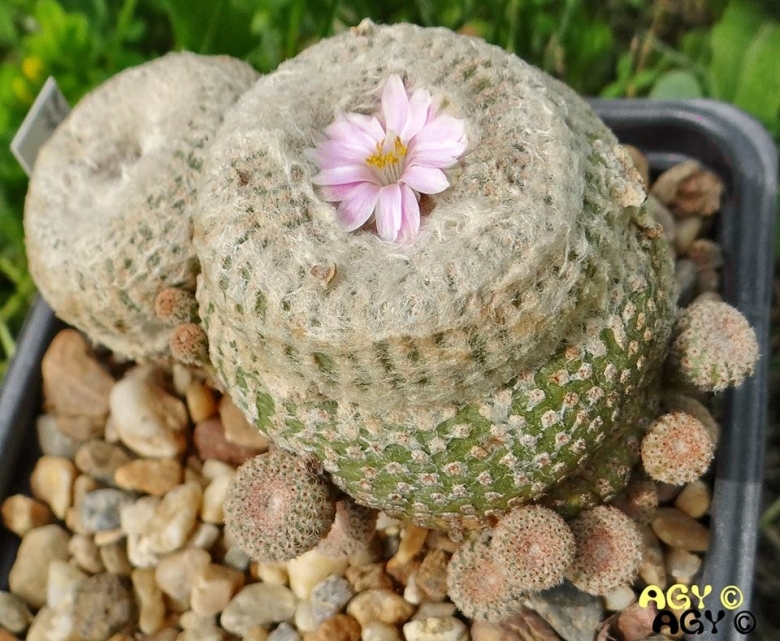 Origin and Habitat: Only known from a small area just on the Argentinian side of the border with Bolivia, in the province of Jujuy, Dept. Yavi: near La Quiaca and Quebrada de Toqueros, at 3,700m (extent of occurrence approximately 200 km2), although it remains to be verified whether it may also be present in a second location in Potosí, Bolivia.
Habitat: It grows in schistose rocks on slopes in a desert, or more strictly a poor, semi-desert where the rare bushes are separated, several meters apart. Sparse temporary grasses can be found for some weeks after the rains, which fall between December and March, but it is possible also to have some rainfall from October to April. The Yavia is a cactus adapted to extremes, cold, drought and a low nutrient, and grows in the crevices of the rocky soil, on the horizontal or on gentle slopes normally just at the level of the soil surface or even lower, immersed in the crevices. Some are even covered by small pebbles. Their extreme rough conditions force them to live almost underground. When the rains come, they swell, and peek up to reach for the sun. When drought starts, they simply dry down under the surface, and get covered with a protecting layer of dust. Their life is only maintained in the swollen root, the caudex. Yavia cryptocarpa is a species sought after by collectors for specialised collections. Extraction by

Description: Yavia is a small-sized, mostly underground monospecific genus with strongly camouflaged aspect vaguely remembering of Epithelantha micromeris. And most of it is a tuberous root!
Stem: Single, more rarely with two or more heads, very small; (in habitat a specimen of 25 mm diameter is an extraordinarily fat and old plant). They have a flat top, with a woolly depression in the centre. This superior disk is the only visible part of the plant and the only part receiving the sun’s rays. The lateral part of the stem is almost cylindrical and is rugose. Cultivated plants change dramatically in their aspect and become soon elonged.
Roots: Conical, succulent, they are a continuation of the underground stem.
Areoles: Ordered in several lines that are not really ribs, just small undulations for which the term tubercles is perhaps too much. In cultivation areoles are whitish and hairy.
Spines: Small, inconspicuous, at top of the plant 0,3-0,7 mm long, and barely visible without the aid of a magnifying lens. The older spines soon become decrepit, more or less destroyed.
Flowers: Yellow to lime green buds appear in late spring and are followed by beautiful pink flowers (about 20 mm in diameter).
Flowers and fruit: One or more flowers are produced from the centre of the plant at one time. This deep centre, which is full of hairs that protect the fruit during its development over several months, is where the fruit dries and dehisces and where the new buds expel the fruits and seeds for dispersal.
The fruit splits from the base. The very thin wall of the fruit looks like thin, brown translucent paper.
Seeds: The number of seeds produced in each fruit vary from 1 to 7 seeds or occasionally more (up to 25)

Subspecies, varieties, forms and cultivars of plants belonging to the Yavia cryptocarpa group 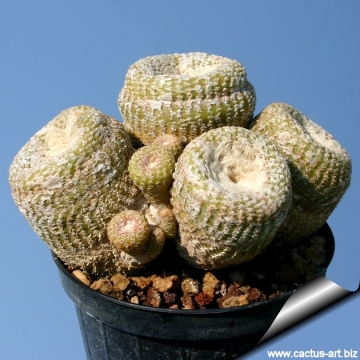 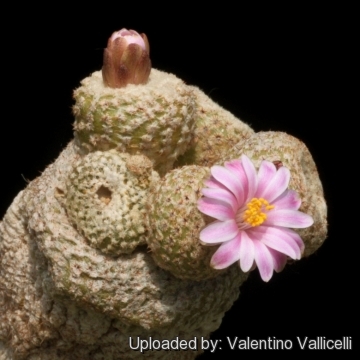 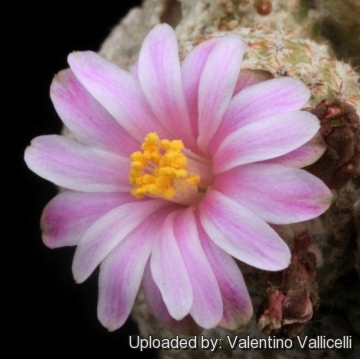 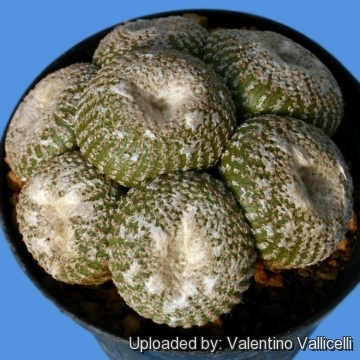 - This is one of the rarest of all known cactuses , found at 3700 m elevation in northern Argentina. Photo by: Valentino Vallicelli 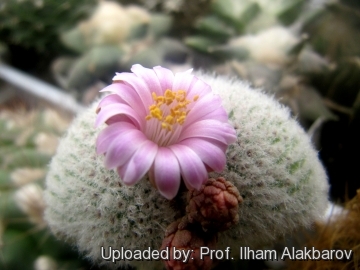 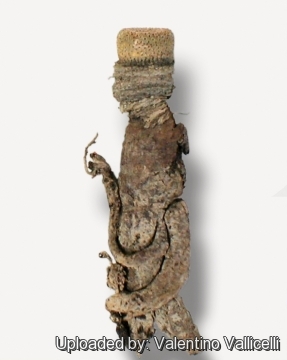 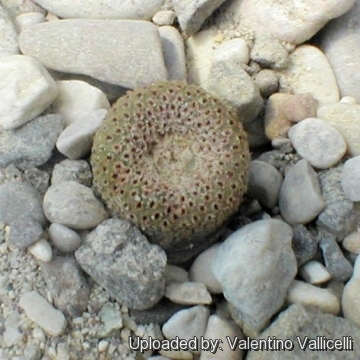 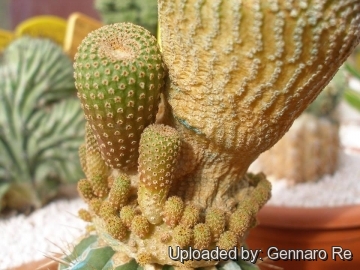 Cultivation and Propagation: The plants need deep pots to accommodate the napiform unit formed by the stem base and the rootstock , and a loose mineral soil with a well-drained substrate. They need a good amount of light, a place near the roof of the greenhouse helps dry out the pot after watering. This can be done weekly during the summertime, if the weather is sunny enough, with a little fertilizer added. Kept this way, plants will show a healthy, although slow growth. They are frost hardy to -10°C.
Propagation: By seeds, remembering that seedlings dislike strong light and dry conditions and need to be repotted frequently. Plants are often grafted to accelerate growth, as they would generally take at least a decade to reach maturity on their own, but the grafted plants are typically rather tall-growing, compared with plants on their own roots, that are usually very flat to the ground.

by Valentino Vallicelli
There are a total of 15 Photos.
Click here to view them all!
Cite this page: "Yavia cryptocarpa" Text available under a CC-BY-SA Creative Commons Attribution License. www.llifle.com 14 Nov. 2005. 27 Jan 2022. </Encyclopedia/CACTI/Family/Cactaceae/5716/Yavia_cryptocarpa>