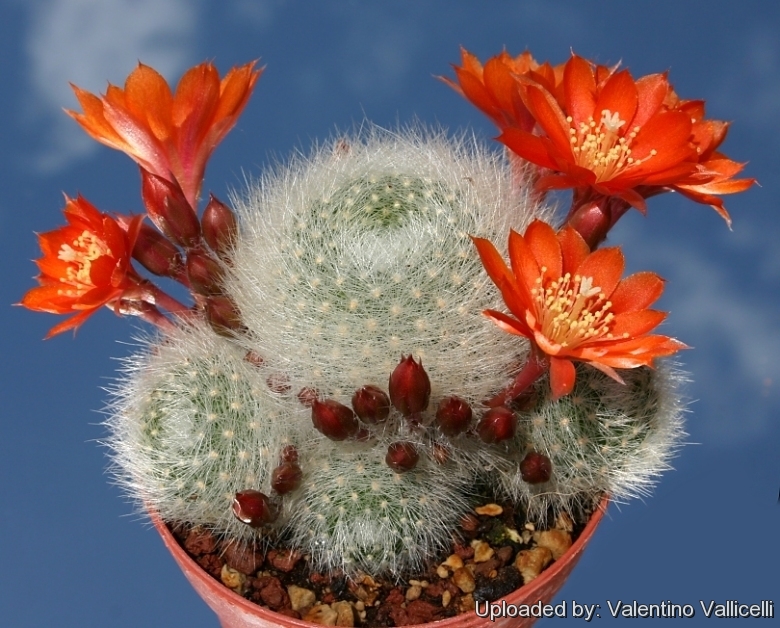 Aylostera albipilosa (Rebutia albipilosa) Photo by: Valentino Vallicelli
This species has an uncommon appeal, and is grown for its beautiful cream-white spines on fuzzy balls. It also produces vibrant orange-red flowers.

Origin and Habitat: Northern Argentina (Jujuy to Salta to Catamarca) and Bolivia (Tarija)
Altitude: From 3600-3700 metres a.s.l.
Habitat: It is found in high, dry, rocky grasslands in rocky slopes of the Andes in fully exposed sites. The dense covering of spines reduces the interception of solar radiation by the stem surface lowering the risks of overheating the apex during a summer day and of freezing during a winter night.

Description: Rebutia albipilosa is a plant from northern Argentina. It's a white-furrowed cactus with dense, long, white bristles and a large main body, with several offsets that bloom sparely but regularly.
Stem: Flattish, 3-8 cm wide, 4-6 cm tall. It would appear that in cultivation they grow larger and cluster more vigorously than in habitat.
Spines: White or cream-white, fine, long and soft, that cover the plant body.
Flower: Deep orange, funnel-shaped, 2 cm in diameter, from the base of the stems.
Fruit: Tiny, berrylike, hidden among the spines, bursting when ripe. 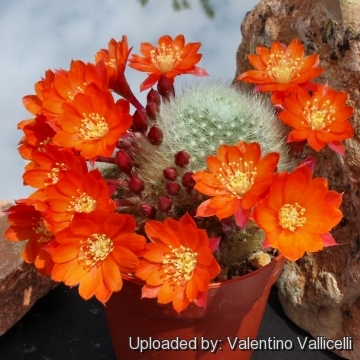 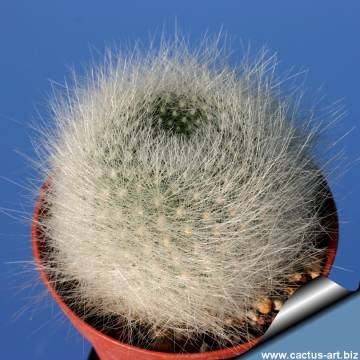 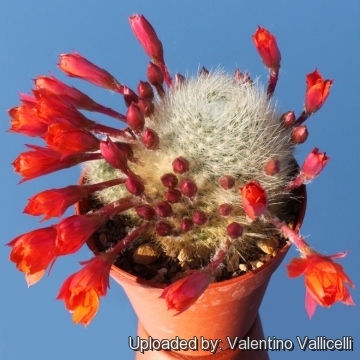 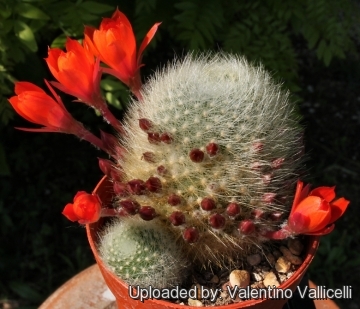 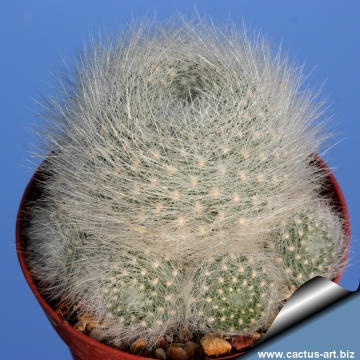 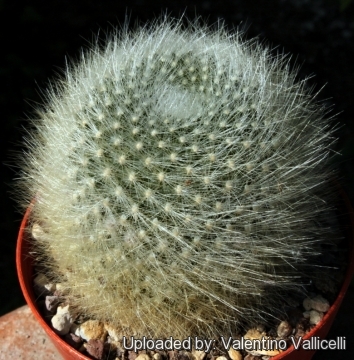 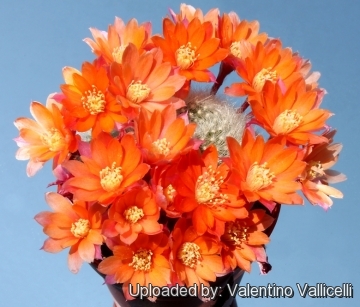 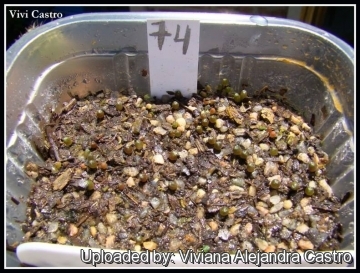 Cultivation and Propagation: Rebutia albipilosa is a summer grower species that is easy to cultivate and recommended for beginners. The whole Rebutia fiebrigii complex has delightful flowers and the plants remain compact, and clumps can easily be managed by division. Another advantage is that the plants are cold hardy in winter if kept dry.
Growth rate: It is a slow growing but easily flowering species that will make clumps given the best conditions.
Soils: This species is easy to cultivate in a very open mineral mix with at least 50% sand or pumice grit and a pH slightly on the acidic side.
Repotting: It is better that they are repotted regularly. Pots should be only slightly larger than the plant and root system. Repotting will increase the number and size of stems, and will increase the number of flowers produced. Repot yearly until they reach about 100 mm in size, then every two or three years will suffice. Repotting is best done at the end of winter, but can be done at other times, too. Do not water for a couple of weeks after repotting, to reduce risk of root rot via broken roots. A layer of 'pea' gravel at the bottom of the pot improves drainage. A layer of decorative gravel as a top dressing helps prevent the caking of the potting mix, which decreases the rate of water absorption. It also keeps the perlite and pumice from blowing everywhere, and looks nice.
Watering: It requires full sun or light shade and careful watering to keep plant compact, and maintain strong and dense spines and allow the pot to dry out between waterings. Keep dry in winter at a minimum temperature of 0°C. Rebutia albipilosa tends to rot if too wet. The plants can be placed outdoors in April, but protected from rain and direct sunlight. Water them thoroughly when placed out, and again in two weeks, and again in one week. After one month the plants are ready to be placed out in full sun and full rain for the summer. During dry spells the collection is watered once a week, during hot dry spells, twice a week.
Fertilization: Feed with a high potassium fertilizer in summer.
Hardiness: It is reputedly resistant to frost if kept on the dry side prior to, and during, cold weather and requires a winter rest period (hardy to -7° C, or less for short periods). Rebutias grow in nature at high altitudes, and do not thrive well at high temperatures in cultivation. They will often go dormant in mid-summer, and resume growth again when the weather cools in late August. They can tolerate amazingly low temperatures for long periods of time. All species can take a frost, even when not bone dry. It is generally accepted that plants kept at too high a temperature, or watered too much during the winter rest period, will not bloom the following year. They will be perfectly happy in pots outdoors from April to September if protected from torrential rain and hail.
Exposition: The plant tolerates extremely bright situations but enjoys filtered sunlight or afternoon shade, inside it needs bright light, and some direct sun. Tends to bronze in strong light, which encourages flowering and heavy spine production, but is likely to suffer from sun scorch or stunted growth if over exposed to direct sunlight during the hottest part of the day in summer.
Uses: It is an excellent plant for container growing. It always looks good and stays small. It look fine in a cold greenhouse and frame or outdoor in a rockery.
Pests & diseases: All, especially the young, are susceptible to red spider mites.
Rot: This species is particularly easy and accommodating, seldom suffer of cryptogamic diseases. Rot it is only a minor problem with rebutias if the plants are watered and “aired” correctly. If they are not, fungicides won't help all that much.
Propagation: Offsets, seeds. Seeds germinate in 7-14 days at 21-27° C in spring, remove gradually the glass cover as soon the plants will be well rooted (ca 1-2 weeks) and keep ventilated, no full sun for young plants! To make a cutting twist off a branch and permit it to dry out a couple of weeks, lay it on the soil and insert the stem end partially into the soil. Try to keep the cutting somewhat upright so that the roots are able to grow downward.
Note: It would appear that in cultivation they grow larger and cluster more vigorously than in habitat.