Description: Arrojadoa aureispina is a clustered, cylinder-shaped cactus with golden-yellow spines that produces apical clusters of pinkish purple flowers. It was discovered by Albert F. H. Buining and described in1972, It is generally included within (as a synonym of) Arrojadoa rhodantha, suggesting that there is not really a fundamental difference between the two, and hard to name accurately without knowing where they come from, and there remains a considerable confusion surrounding the true identity of this this plant.
Derivation of specific name: the specific name “aureispina”, yellow spined, refers to characteristic golden-yellow spines of this plant.
Stems: Cylindrical, erect or semi-erect, up to one metre long and about 5 cm in diameter, typically with axillary branches that appear to arise from the cephalia from almost near the base.
Ribs: 14.
Areoles: Woolly golden yellow.
Radial spines: About 12 thin, needle-like ca. 8 mm long.
Central spines: 8-9 more long and robust (up to 14 mm), straight, pale yellow to dark golden yellow and shiny.
Cephalia Composed of dense, long brown hairs.
Flowers: Tubular, in clusters at the tip of stems from the cephalium, liliac-pink to deep carmine red, about 3 cm long and only one cm in diameter.
Chromosome number: 2n = 22
For more details see: Arrojadoa rhodantha 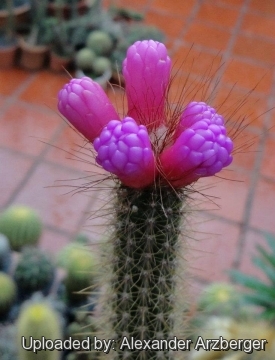 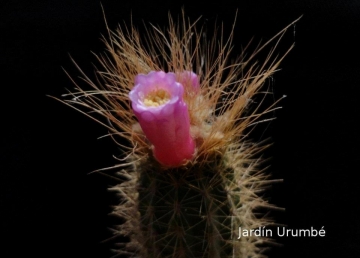 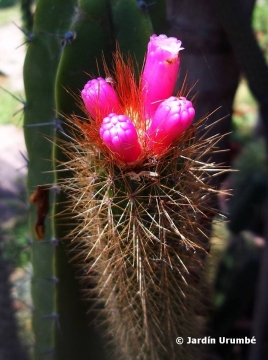