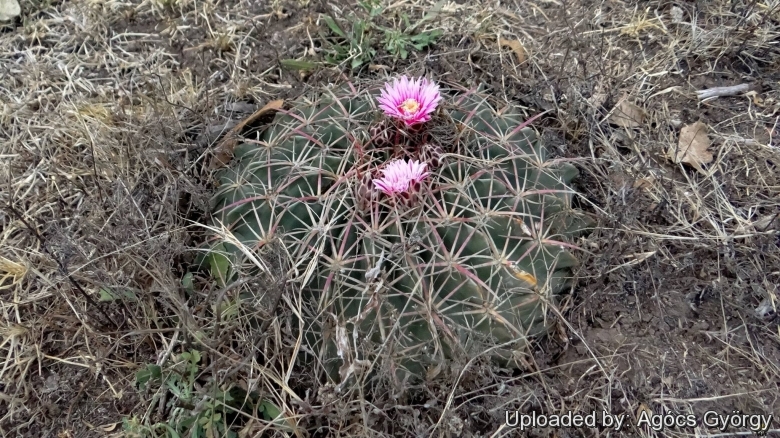 Origin and Habitat: Ferocactus macrodiscus is endemic to Mexico, and is distributed in the states of Guanajuato and Oaxaca, and has a disjunct distribution. Anderson (2001) and Arias et al. (1997) report it also from from Querétaro and San Luis Potosí (extent of occurrence <2,000 km2). The species is known from less than 10 locations.
Altitude range: The species occurs at elevations of 2,300 - 2,600 metres above sea level.
Habitat: Ferocactus macrodiscus is very habitat specific and only occurs sporadically within the extent of occurrence. It occurs in a very dry area in grasslands and oak (Quercus) forest in association with Tillandsia usneoides, bushes and desert trees. During drought periods the plants sink well into the ground, from the effects of heat and dryness. For this reason it is very difficult to locate the cactus until the rains arrive and it swells itself and prepares to bloom. If it is not flowering, it would be difficult to see it at all. The primary threat to this species is the destruction of habitat from the conversion of grasslands and oak forests to subsistence mixed agriculture and cattle ranching. Some subpopulations are in a steep decline.

Description: Ferocactus macrodiscus is a medium sized barrel cactus with a depressed-globose stem and blue-green epidermis. Growth from seed is quite rapid and plants will flower when only a few cm across. Flowers are white with pinkish-purple striped petals. Two subspecies are recognized, the nominate form and subsp. septentrionalis (J.Meyrán) N.P.Taylor.
Stem: Solitary, flat, depressed-globose, or disc-shaped up to 10 cm tall and 30-45 cm in diameter (but up to nearly 60 in some cases).
Ribs: (13-)16 to 21(-35), somewhat flattened, sometimes acute on the margin, somewhat depressed at the distant areoles.
Areoles: 5 to 10 mm long with yellow felt sunken in notches in the ribs.
Spines: Yellow or red and curved.
Central spines: 1 to 4 (of which one longer and pointing downward), up to 3,5 cm long, stouter and flatter than the radials, often banded.
Radial spines: 6 to 8, more or less curved backward, 2-3 cm long.
Flowers: Obconic,, 3-4(-5) cm long and about 3-4 cm in diameter. Inner perianth-segments linear-oblong, acute bright purple/pink with pale margins. Stamens and style included.
Blooming season: Spring to summer. In habitat it flowers between April and July.
Blooming season: From early spring into summer.
Fruits: Nearly spherical, to 4 x 3 cm, red.
Seeds: To 2 mm, dark brown, finely pitted.
Similar species. Ferocactus macrodiscus closely reminds {Homalocephala texensesis}} which has dense wool in the axils of the scales of the ovary, and the seeds are large and smooth, on the contrary the ovary of Ferocactus macrodiscus has naked axils of the scales and the seeds are smaller and pitted. In spite of these and other differences, F. macrodiscus appears to be nearly as closely related to Homalocephala texensis and F. macrodiscus may represent transitional forms between Ferocactus and Echinocactus, although Homalocephala is generally considered to be a side development from Echinocactus.

Subspecies, varieties, forms and cultivars of plants belonging to the Ferocactus macrodiscus group 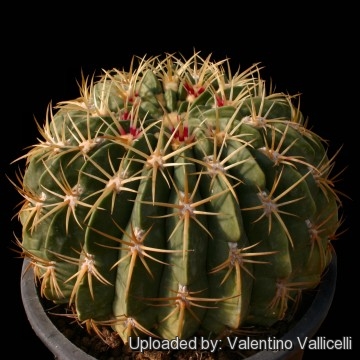 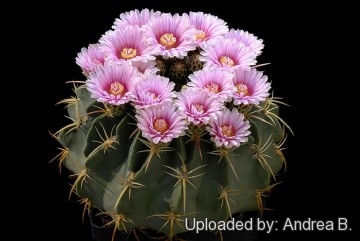 - Unusual in Collections it starts blooming when the plant has only a diameter of 8-12 cm. In its habitat it passes the dry periods almost buried in the ground. (Ferocactus macrodiscus) Photo by: Andrea B. 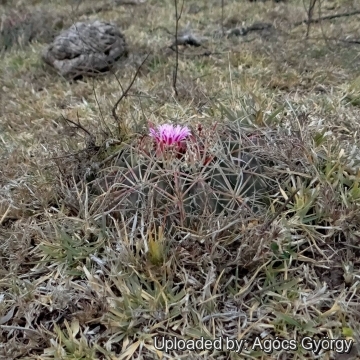 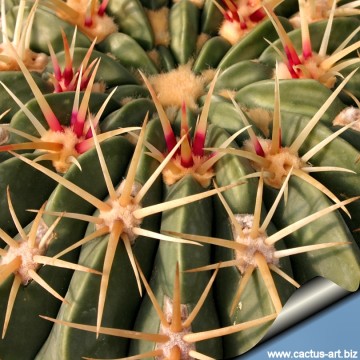 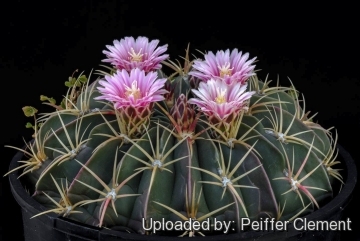 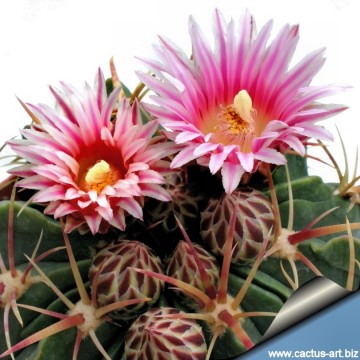 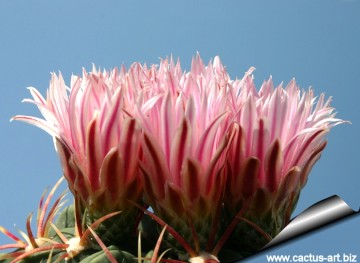 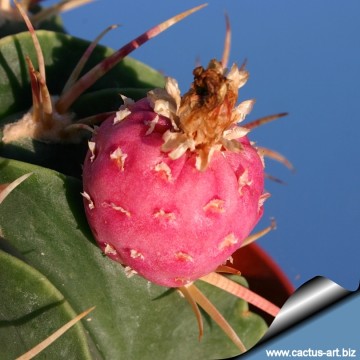 Cultivation and Propagation: Unlike other Ferocacti that flowers only as large adult, Ferocactus macrodiscus will flower at a reasonable size in a small pot in a glasshouse. Slow growing to start from seed, but it does well under cultivation and plants will flower when only a few years old.
Soil: It is suited for any rich, well drained soil (Ph 6).
Exposure. Grow it in full sun throughout the year.
Temperature requirements: In winter keep completely dry at 10°C, but it can tolerate sporadic light frost. Anyhow it's problematic if the temperature goes below 5° with high humidity during the winter rest. Even adult specimens are affected by wounded spots in their epidermis.
Watering needs: It takes less watering than the standard for other ferocacti. It's necessary to be avoid wetting the bodies of these plants while they are in sunlight. A wet cactus in the sun light can cause sun burning, which can lead to scars, or even fungal infections and death.
Pests and diseases: It is apt to undergo attacks of red spiders if it is placed near fruit trees.
Propagation: Seeds are the only way of reproducing.
Uses: Ferocactus macrodiscus (The"Candy Cactus") is used to make sweets. The middle is cored out and soaked in sugar, then chopped up and eaten.

by Cactus Art
There are a total of 18 Photos.
Click here to view them all!
Cite this page: "Bisnaga macrodisca" Text available under a CC-BY-SA Creative Commons Attribution License. www.llifle.com 14 Nov. 2005. 07 Feb 2023. </Encyclopedia/CACTI/Family/Cactaceae/4319/Bisnaga_macrodisca>