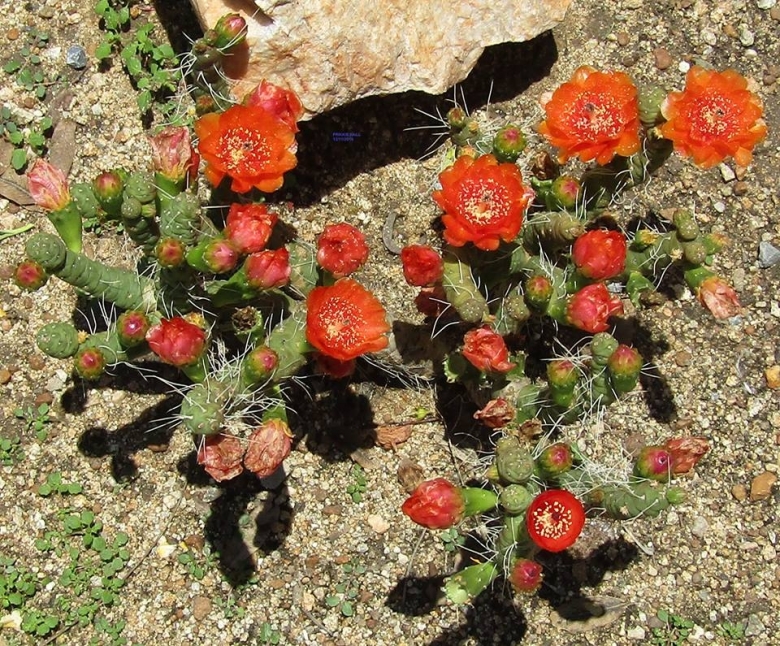 Origin and Habitat: Austrocylindropuntia verschaffeltii can be found in Argentina in La Rioja, Catamarca, Tucumán, Salta and Jujuy, and in Bolivia.
Altitude range: 1,500 to 3,000 metres above sea level.
Habitat and Ecology: The species grows in high altitude grasslands in barren hills on rocky soils. It grows in the sun between gramineous vegetation. Austrocylindropuntia verschaffeltii is frequent but not abundant. It is widespread where it occurs and there are no major threats for this species.

Description: Austrocylindropuntia verschaffeltii is a much branched shrubby cactus, that forms low, dense clumps 10-30 cm high that looks sort of like worms growing out the ground. The shoots are oblong and round and with cylindrical leaves when young. The flowers are orange or coppery red and are produced on young plants.
Stems: Joints globular-ellipsoidal to short-cylindric 1 to 10 cm long, somewhat tuberculate, pale green, becoming woody at base, green when grown in partial shade or low light, but when exposed to full sun they blush an attractive purple-red colour, new growth a burgundy in winter, sometimes producing small globose segments by acrotonic branching (with most developed branches located near the top of the mother branch). In cultivated plants joints are much more elongated, 6 to 21 cm long, slender, 1-1.5 cm in diameter, strongly tuberculate, and often spineless.
Areoles: Small, narrow, longer than broad, filled with short white wool. Glochids few, white.
Leaves: Rudimentary, awl-like, terete, persistent, 0.5-3 cm long.
Spines: Variable, sparse, usually 1 to 3 (occasionally up to 7), yellowish, weak needle-like or bristle-like, 1-6 cm long straight or bent, sometimes interlacing, sometimes absent.
Flowers: Numerous, orange-red to copper-red, to 4 cm long; pericarpels with few areoles, slightly bristly at rims.
Fruits: Ellipsoidal to pear shaped, spiny or spineless. 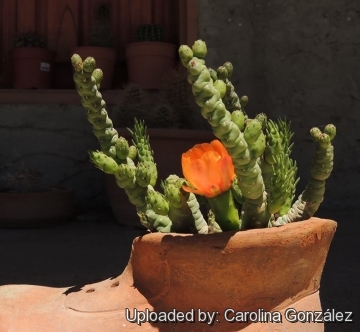 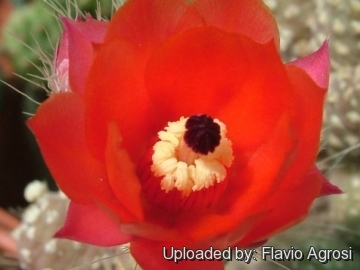 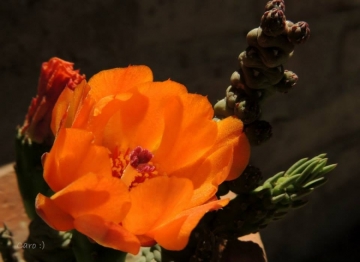 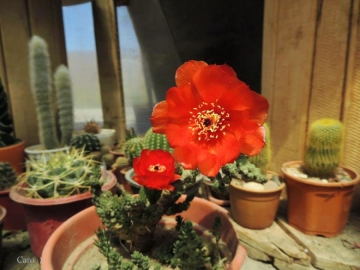 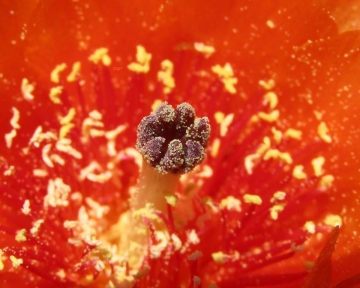 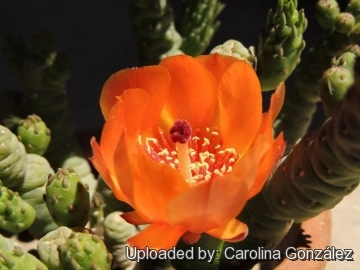 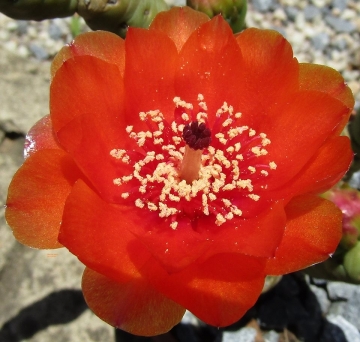 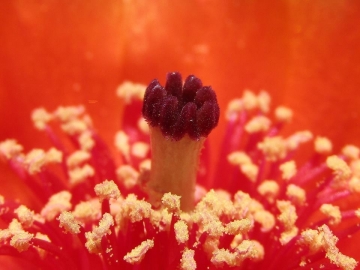 Cultivation and Propagation: Austrocylindropuntia verschaffeltii is a xerophytic, summer-growing, species adapted to very dry soils that, like many cacti of mountainous areas, likes bright light, cool and dry conditions in the winter; this is important for the flowers as well as for their health. It is somewhat rot prone if kept in a non ventilated place.
Growth rate: Slow-growing.
Soil: It requires a very fast draining drying open mineral, sandy-gritty cactus composts. Provide a very good drainage.
Repotting: Repotting will increase the number and size of stems, and will increase the number of flowers produced. Repot yearly until the plant reaches about 5 cm in diameter, then every two or three years will suffice. Repotting is best done at the end of winter, but it can also be done at other times. Do not water for a couple of weeks after repotting, to reduce the risk of root rot via broken roots. It needs deeper pots to accommodate the big tap root. Pot bound, starved plants will rapidly look tatty and won’t flower well.
Exposure: It needs an absolutely airy and sunny place this brings very healthy plants with a good spination and flowers.
Watering: Water and feed in the vegetation period from April until to mid of September, keep dry and cool in winter, they have to be stimulated to bloom by dryness and you may give them water first when the plants start to produce the new buds. Water it less than average if in bigger pots.
Fertilization: Feed them once during the growing season with a fertilizer specifically formulated for cactus and succulents (high potash fertilizer with a dilute low nitrogen), including all micro nutrients and trace elements diluted to ½ the strength recommended on the label. They thrive in poor soils and need a limited supplies of fertilizer to avoid the plants developing excess vegetation, which is easily attacked by fungal diseases.
Special need: It is suited for airy exposures. Provide very good ventilation. Nearly all problems occur as a result of overwatering and poor ventilation, especially when weather conditions are dull and cool or very humid. They must have very dry atmosphere.
Hardiness: These plants tolerate light frost (- 2 °C for a short period). They need to be kept in a cool place (min. temperature around 5° C) during winter rest. This is important for the flowers as well as for their health. Without this cool winter period they normally won't get many buds.
Heat tolerance: It cannot endure any standing heat.
Pests & diseases: These cacti may be attractive to a variety of insects, but plants in good condition should be nearly pest-free, particularly if they are grown in a mineral potting-mix, with good exposure and ventilation. Nonetheless, there are several pests to watch for.
- Red spiders: All, especially the young, are susceptible to red spider mites. Red spiders may be effectively rubbed up by misting the plants from above.
- Mealy bugs: Mealy bugs occasionally develop aerial with disfiguring results, but the worst types develop underground on the roots and are invisible except by their effects.
- Scales, thrips and aphids: These insects are rarely a problem.
- Rot: Rot is only a minor problem if the plants are watered and “aired” correctly. If they are not, fungicides won't help all that much.
Propagation: Seeds, or (usually) cuttings. The seeds can be sown in pots of fine, well-drained sandy soil, any time during the spring when temperatures are warm. The seedlings should not be disturbed until they are well rooted after which they can be planted separately in small pots. Cuttings of healthy shoots can be taken in the spring and summer (let dehydrate the cuttings for a few weeks and the roots will coming quick) Once the callus forms, the cutting may be inserted in a container filled with firmed cactus potting mix topped with a surface layer of coarse grit. They should be placed in the coarse grit only; this prevents the cut end from becoming too wet and allows the roots to penetrate the rich compost underneath. Cuttings will take root in a minimum temperature of 20° C (but better in hot weather).