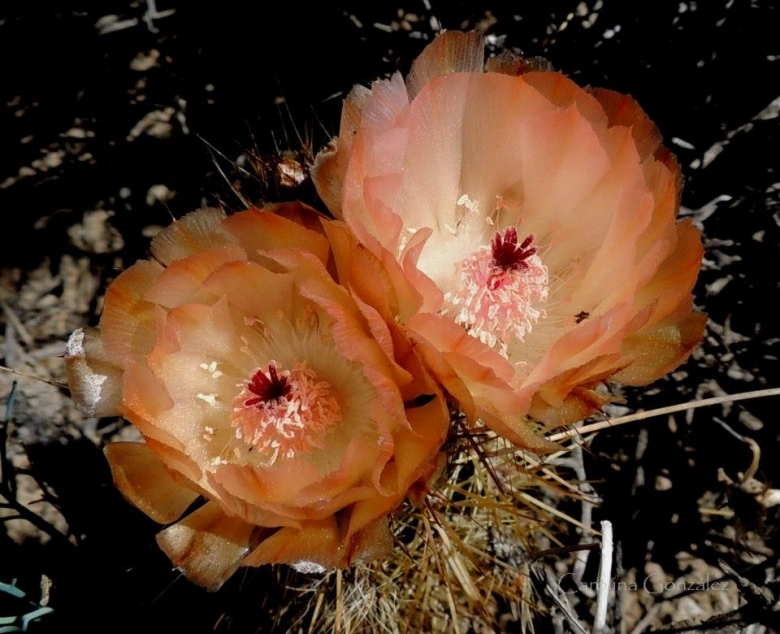 Origin and Habitat: Argentina (Chubut, La Pampa, Neuquén, Rio Negro, Santa Cruz); Chile (Aisén)
Habitat: Grows on rocky soils, often among scrubs and grasses. This species is common and abundant in Argentina. There are no major threats to this species; it may be favored by livestock grazing. In the Chilean range it is threatened by cherry tree agriculture and urbanization.

Description: Austrocactus bertinii forms a low column of more or less hooked spines, simple or branched at base with several stems. This plant is extremely variable especially for the presence of hooked spines and size of the stems. The several forms found in the vast distribution area have received different specific names, but all them show a continuous variation, so it is extremely difficult to establish the limit from one species to another.
Stems: 20-30(-50) cm tall and 3-5(-8) cm in diameter, dark olive green slender cylindrical to cylindrical
(A thin growing form with stem of only 1-2 cm in diameter is known as Austrocactus gracilis).
Ribs: Up to 12 prominent and tuberculate.
Areoles: Circular yellowish-felted about 1 cm apart.
Central spines: 1 to 4, hooked, somewhat arched, or almost straight stout, the lower and longest about 3-4(-6) cm long, creamy- white, yellowish-brown, reddish-brown, mahogany or almost black. Older spines are grey and provide effective camouflage in habitat.
Radial spines: 6-10 light coloured, up to 1,5 cm long.
Flowers: Diurnal, up to 10 cm in diameter and 6 cm long, pinkish or yellowish sometime with some violet, borne on the upper part of the areoles near the top of the plant. Stigma lobes numerous, red or purple. Stamens in two series the lower forming a ring around the style. Tube and ovary very spiny with woolly hairs and bristles.
Fruits: Nearly dry, globose, spiny with wool and bristles, flower remnants persistent.
Seeds: Broadly oval, flattened. 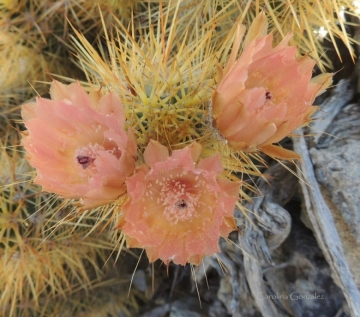 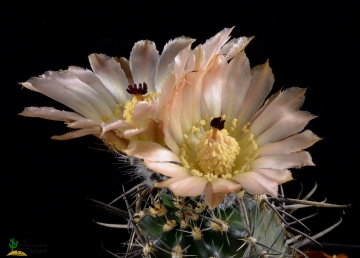 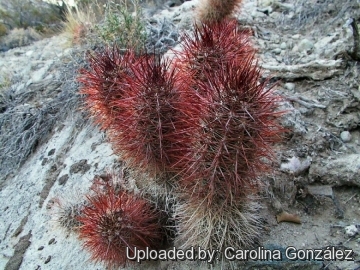 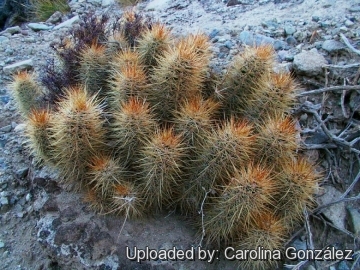 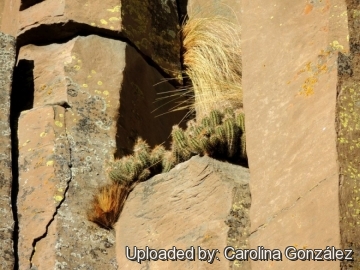 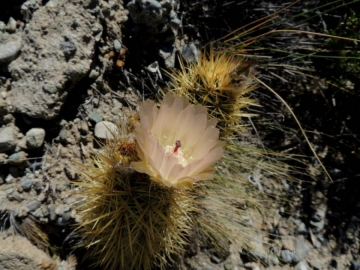 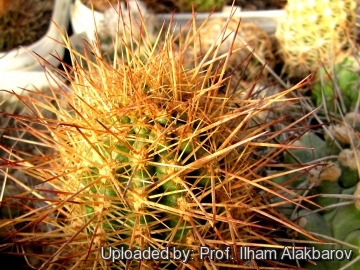 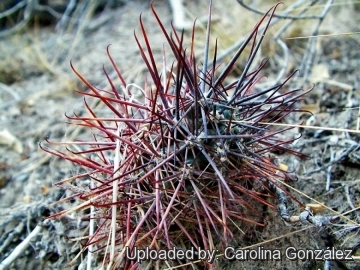 Cultivation and Propagation: Austrocactus bertinii are relatively easy to grow, providing they are kept cold, but dry during autumn and winter. However difficult to find high quality plants of this species in cultivation. They are very cold hardy cacti theoretically hardy to -18°C (or more) particularly when dry. These cacti are often grown grafted. Plants cultivated outdoors are drought tolerant and take full sun. They are wonderful companion plant for Echinocereus and Escobaria cacti species.
Soil: It need a very well-drained, coarse mineral soil. To prevent rottenness it is also advisable to surround its root neck by very rough sand or grit, this help a fast water drainage and an appropriate air circulation.
Repotting: Repot in the spring, when its roots become cramped. Generally, it should be repotted every other year in order to provide fresh soil. After repotting, do not water for a week or more.
Watering: It grows fairly fast in summer if provided with copious water but allows to dry thoroughly before watering again. During the winter quiescent period it must be strictly kept dry since it is very sensitive to any moisture excesses.
Fertilization: During the beautiful season it’s good to enrich the soil using a fertilizer rich in potassium and phosphorous, but poor in nitrogen, because this chemical element doesn’t help the development of succulent plants, making them too soft and full of water.
Exposition: It is essential to give full sun otherwise they will become atypical (light shadow my be useful in the hottest summer days). If grown in full sun, the new growth will flower in spring and summer.
Frost Tolerance: Very frost hardy can withstand temperatures down to minus 18° C (or less). In cultivation overwinter in a cool place (at -5/-10°C) this is important for the flowers as well as for plants health. Without this cool winter period they normally wont get any buds.
Heat tolerance: In warmer climates it should be protected from excessive heat and too much sun sun in summer because it is not very heat tolerant.
Reproduction: Suckers or seed. Remove the basal suckers (if available) in spring or summer and let the cuttings dry for a few days before inserting in compost. Sow the seeds in spring in a well-aerated compost at a temperatures of 22-24°C . Stand the pots in water, moisten thoroughly and drain. Scatter and press lightly the seed onto the top of the compost. But do not cover the small seeds with compost. Secure a polythene bag around the pot or cover the container with glass or and place in a warm shaded place. If possible, germinate in a propagator. Some seedlings may appear within a week or 10 days others will take longer. At lower temperatures, germination usually takes considerably longer. Once germination has taken place, remove gradually the glass or plastic and move into a good light but not in direct sun. If the young plants are exposed to too much sun, or the compost dries out, they may stop growing and often turn red; once they stop, it is often difficult to persuade them to start growing again. Never let the pots dry out-but don't saturate them either. A sodden compost is as harmful as a dry one. For its sensitive roots this species is frequently grafted to avoid root problems.

by Carolina González
There are a total of 30 Photos.
Click here to view them all!
Cite this page: "Echinocactus bertinii" Text available under a CC-BY-SA Creative Commons Attribution License. www.llifle.com 14 Nov. 2005. 05 Mar 2021. </Encyclopedia/CACTI/Family/Cactaceae/4000/Echinocactus_bertinii>