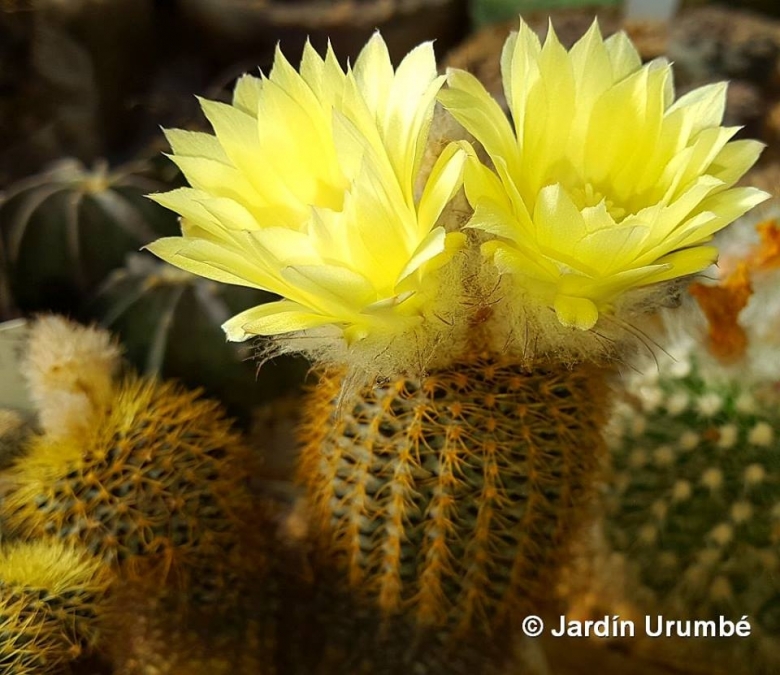 Origin and Habitat: Frailea mammifera is found on north of Pedrito, Rio Grande do Sul, Brazil (extent of occurrence is 1,800 km2). The species is not abundant. The population is fragmented.
Altitude range: The plant is found at altitudes up to 100 metres above sea level.
Habitat and Ecology: The species grows on rocky outcrops and stoney fields in pampa grasslands. This habitat has very high potential to be used for agriculture. The major threats are grazing by cattle trampling, agriculture, forestry of Eucalyptus, invasive grasses and fire.

Description: Frailea mammifera is a miniature plant, usually solitary, or sometime basally branched. Two subspecies are recognized, the nominate form and subsp. angelsiae R.Kiesling & Metzing.
Stem: It is diminutive in size, subglobose or eventually shortly columnar, glossy dark green and purple, up to 3 cm in height, 2-2,5 cm in diameter.
Ribs: About 17, with round and tapering tubercles, with a very typical dark purple-brown lunate, markings beneath the areoles.
Areoles: Placed in the upper side of the tubercles.
Central spines: 2-4, erect, golden to brown, stout, 2-3 mm long.
Radial spines: 18-20, spreading, yellowish or whitish, thin, 1,5-2 mm long.
Roots: Fat central tap root.
Flowers: Infundibuliform, larger than the plant itself, sulphur-yellow, 2,5 cm in diameter; tepals abruptly acuminate, long and slender, stigma-lobes 5-7. But don't be disappointed when the easily produced buds fail to open. Fraileas are cleistogamous, meaning that their flowers produce seed without even opening. Without the need for pollination, the buds rarely reach full bloom and remain closed. They will open only in great heat in the hottest, brightest, afternoon sun, if at all.
Fruit: Up to 8 mm in diameter. Dry, indehiscent, that detaches easily, pericarp membranous, fragile that break easily, releasing the seed.
Remarks: This plant is short living (It only lives about 10-15 years). 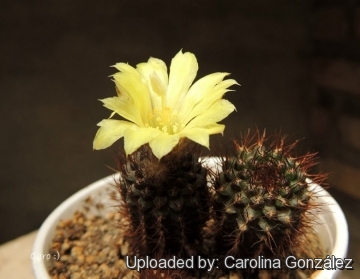 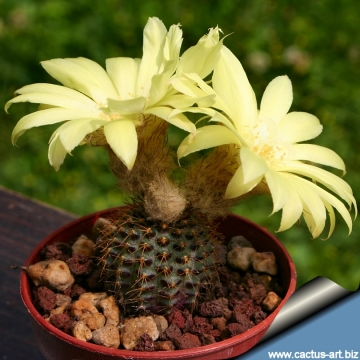 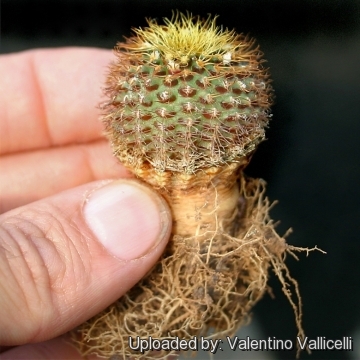 - HU345 ( Leopoldo Horst) Locality: North of Dom Pedrito, Rio Grande do Sul, Brazil Altitude: 250m. It is a tiny cactus with sulphur-yellow flowers larger than the plant itself. These fully developed flowers are indeed quite rare, and will open only in great heat or on the hottest, brightest, sunny afternoon , if at all. Photo by: Valentino Vallicelli 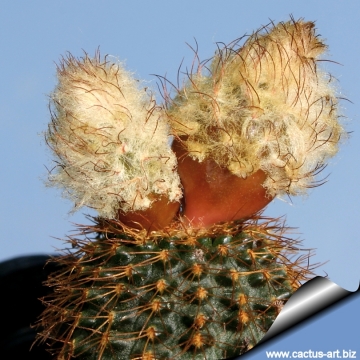 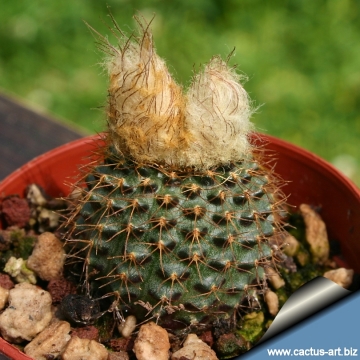 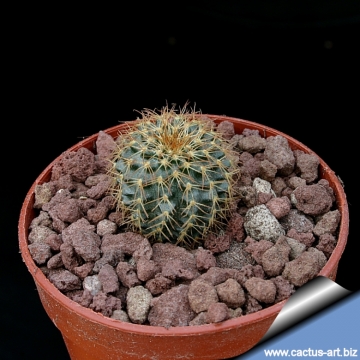 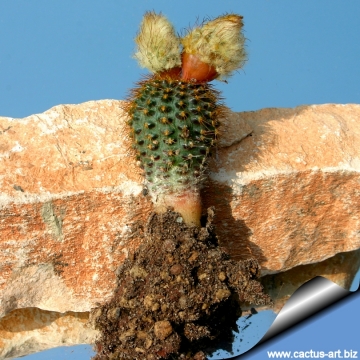 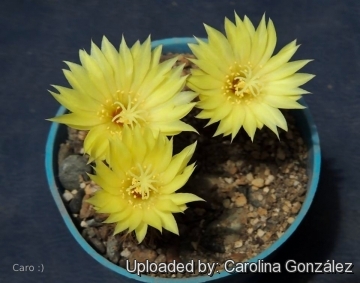 Cultivation and Propagation: Grow them in rich, porous soil, and let them dry out between waterings. These plants need a minimum temperature of 5-10° C (but occasionally temperatures of a few degrees below 0° are not dangerous) .
Sun Exposure: It enjoys full sun, and it can take on a near black appearance when kept in bright light. In a shaded position the plants grow faster, but are not flat shaped or dark coloured.
Characteristically, during the dry season plants retract completely under the ground, both in the wild and in cultivation too.
Propagation: With fresh harvested seeds or (rarely) by grafting.