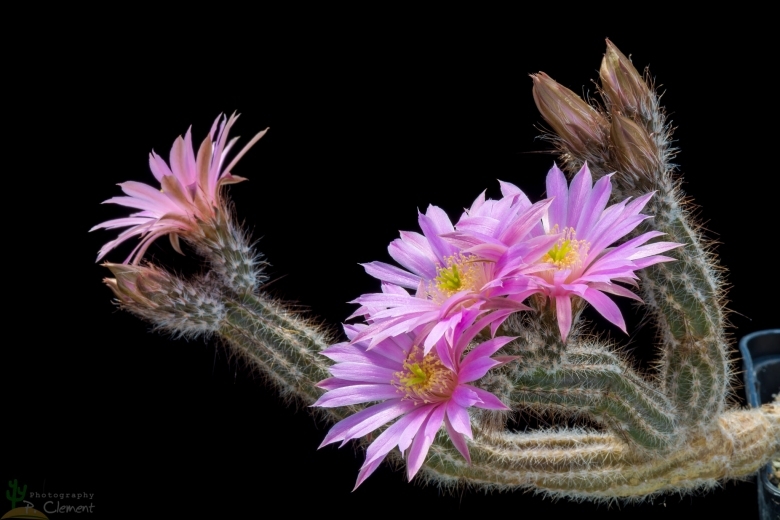 Description: Echinocereus schmolii v. nerispina (Wilcoxia nerispina) is generally included within (as a synonym of) Echinocereus schmollii, suggesting that there is not really a fundamental difference between the two, however it is sometimes considered distinct enough to be worthy of varietal status on the basis of darker, stiffer spination
Derivation of specific name. The name “nerispina”, meaning "black spined", refers to the grey or black colouration of central spines. The usually darker colour or the spines helps distinguish this cactus from the otherwise identical Echinocereus schmollii
Stems: Cylindrical 1-2 cm in diameter.
Spines: Grey to blackish.
Flowers: For the most part lateral, lilac pink.
For more details see: Echinocereus schmollii 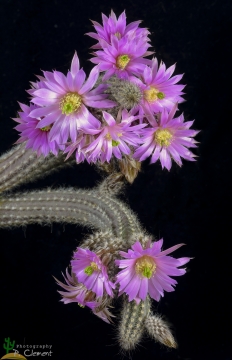 Cultivation and Propagation: This cactus is used to be considered difficult and somewhat rare in cultivation. It likes regular irrigation at time of growth, but do not over water.
Sun Exposure: Best in full or partial sun exposure. In mild climate they grow well when planted freely outside in well-drained soil.
Frost hardiness: It is quite frost hardy -7 (-10)° C.
Maintenance: During the winter months it may become dormant, during which no moisture is required, and the plants should be grown cool and dry (at -5 +10°C). This is important for the flowers as well as for its health. Without this cool winter period it normally won't get any buds.
Propagation: Seeds (usually), it also can be grown from stem and root cuttings.