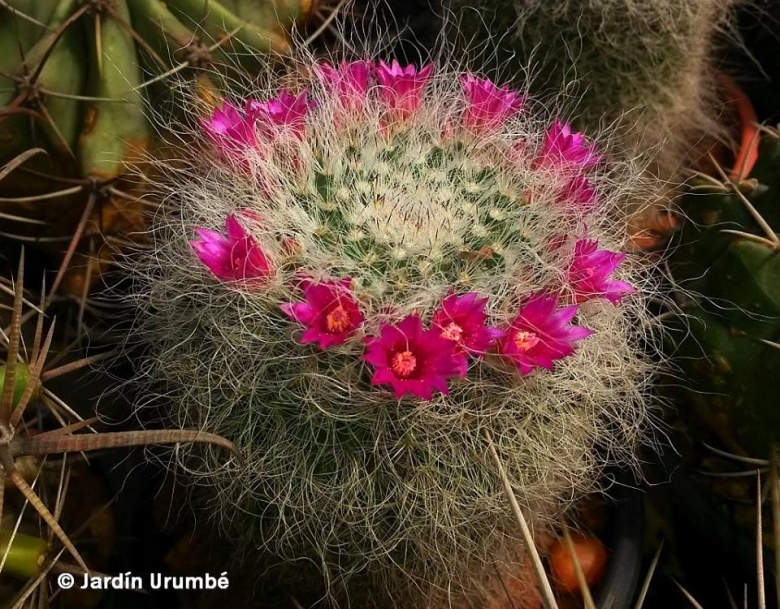 Description: Mammillaria hahniana var. giselana is an old variety name described by Neale in 1935. According to the author's description the variety distinguishes by thinner axillary hairs, that do not conceal the green tubercles. These axillary hair are less than 15 mm long and each areola has up to 40 radial spines. However in Mammillaria hahniana the density and length of hair and spines varies considerably also in plants of the same batch. The var. giselana and the standard M. hahniana are undoubtedly very closely related and very similar in many ways, showing but small differences. It is very difficult to discriminate specific characteristics as to justify their varietal separation. The different length of the bristles and the number of radial spines are variable from individual to individual and do not justify the division in varieties. Up to date most authors have dismissed var. giselana as perhaps not worthy of even varietal status, but it still has a value for a collector because they identify plants with particular characters.

Subspecies, varieties, forms and cultivars of plants belonging to the Mammillaria hahniana group

Cultivation and Propagation: It is a rapid growing species that will form large clumps rather rapidly when compared to other Mammillaria species. Needs lots and lots of space to grow. Water regularly in summer, but do not overwater (Rot prone) Use pot with good drainage and a very porous potting media, keep dry in winter. Feed with a high potassium fertilizer in summer. It is quite frost resistant if kept dry, hardy as low as -5° C (some reports give it hardy to -12°C) Outside full sun or afternoon shade, inside needs bright light, and some direct sun.
Use and Trade: This cactus is used as an ornamental, and its fruit are eaten by humans.
Propagation: Division, direct sow after last frost.