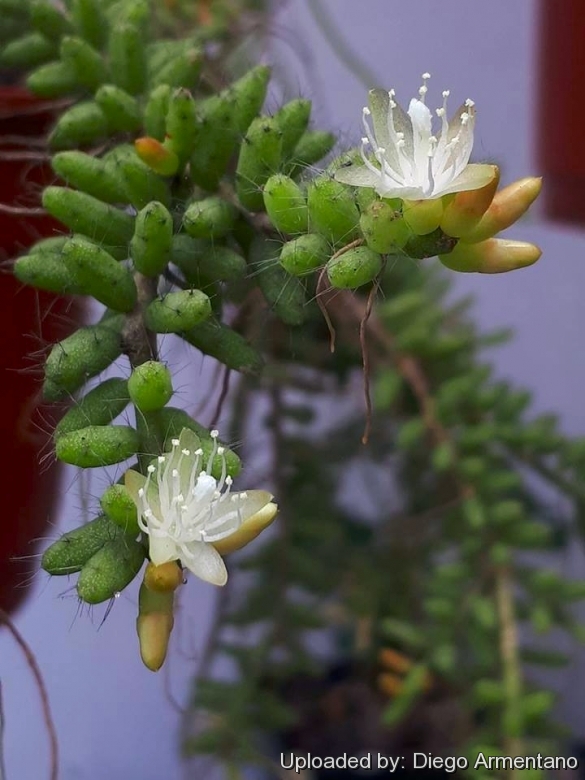 Origin and Habitat: Rhipsalis mesembryanthemoides is widespread in the Brazilian state of Rio de Janeiro, on both sides of the Baja de Guanabara. This species has a very small extent of occurrence and area of occupancy (AOO km2 9), and today it is only known from public parks in the greater urban area of Rio de Janeiro.
Altitude range: This species grows at an altitude below 600 metres above sea level.
Habitat and Ecology: This species occurs as an epiphyte on trunks of trees in public parks. They establish themselves in trees, where they sometimes form hanging branches which can be 20 cm long. The berries are eaten by birds, and in this way the seeds can fall in the most impossible places. The original habitat was presumably lowland forest. There is likely to be continuing decline of the species due to the impacts of the urban environment, especially as the city gets warmer and drier. Rhipsalis mesembryanthemoides is critically endangered and it is potentially extinct in the wild as it no longer occurs in any natural habitat even though it has colonized the urban areas. 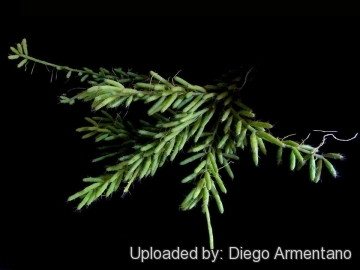 Rhipsalis mesembryanthemoides Photo by: Diego Armentano
Send a photo of this plant.

Cultivation and Propagation: The Clumpy mistletoe cactus, (Rhipsalis mesembryanthemoides), is easily cultivated in earth but evidently an epiphyte like its congeners and tolerates neglect. These forest cacti tend to be long lived. Like a sea coral, the branching form of this plant provides fascinating texture both in mixed succulent plantings and as a single specimen plant. As the plant gains in size, the tops tend to arch - a perfect form for hanging baskets. These forest cacti tend to be long lived protect from chill and from high heat. A highly desirable house plant, it provides abundant flowers which are produced in winter. They are followed by white berries which give this cactus its common name.
Exposure: This plant (as with all Rhipsalis) prefers partial shade.
Watering: It requires ample summer water (more than other cacti), but allow soil to dry slightly between waterings. Reduce water in autumn, but once flowering has begun, water reguarly and keep slightly warm. Occasional misting is appreciated in addition to light, weekly waterings.
Soil: Like all Rhipsalis species and their epiphytic relatives, it requires a loose, acidic, rich soil largely composed of organic material, such as peat or sphagnum moss, This type of soil would normally be used for orchids, bromeliads or other epiphytic plants. Provide excellent drainage.
Hardiness: Frost tender, it must be brought inside over the winter in all but the most mild of climates. It needs night-time temperatures no cooler than 5° C, especially in the winter.
Special requirements: These plants bloom profusely if grown in an even, high temperature, but significantly less if the temperature fluctuates between 4°C and 18°C. They drop their buds easily if they are moved. Once flower buds have formed, do not move the plant, as slight changes in environment may cause the buds to drop.
Propagation: Stem cuttings.