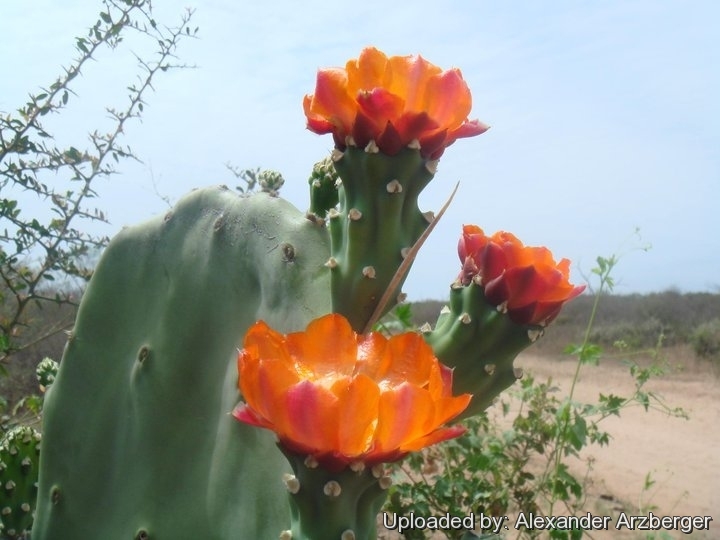 Origin and Habitat: Argentina (Catamarca, Chaco, Corrientes, Formosa, Jujuy, La Rioja, Salta, Santiago del Estero, Santa Fe, and Tucumán), Bolivia (Tarija) and Paraguay (Boquerón and Alto Paraguay departments)
Altitude range: 200 and 1,300 metres above sea level.
Habitat and Ecology: In Paraguay the Opuntia quimilo grows in sandy soil, in the xerophilous Chacoan forest together with Cereus validus and Trichocereus terschekii. It also grows in alkaline and salty soils, sometimes with Stetsonia coryne, Cereus oethiops, Cleistocactus baumannii and spiny Bromeliaceae. Opuntia quimilo is widespread and abundant, and there are no major threats affecting it. This species is favored by anthropogenic activities, such as livestock grazing, because it is dispersed by animals. It occurs in many protected areas. In some areas it may be affected by deforestation. Opuntia quimilo is pollinated by large matinal bees and hummingbirds (Chlorostilbon aureoventris and Heliomaster furcifer). Hummingbirds, which are more common in the afternoon, prefer female flowers whereas bees prefer hermaphroditic flowers. Unlike most prickly-pear species O. quimilo is not accepted as a host by the parasite Cactoblastis cactorum.

Description: Opuntia quimilo is a much branched shrub or treelike cactus with distinct trunks up to 30 cm in diameter, reaching a height and a diameter of 4 metres. Some people mistake the large, flattened pads of prickly pears, Opuntia quimilo, for example, for leaves. They are actually cladodes or stem segments that bear the green ephemeral leaves and spines. Opuntia quimilo is one of three known gynodioecious cacti, that is to say it has female flowers on one plant and hermaphrodite flowers on another plant.
Derivation of specific name: epithet derived from the local vernacular name "quimilo" used by locals in North Argentina to describe the species.
Stems (cladodes): Joints, succulent, large, elliptic or obovate, 15-30-(50) cm long by 8-15-(25) cm broad, 2 to 3 cm thick, shiny green, greyish green or bluish green, rounded at the top.
Areoles; Large, prominent 3-4 (or more) mm in diameter, with white to greyish wool (when young), soon becoming bare.
Glochids: Few, not evident,greyish-yellow, of 2-4 mm long.
Leaves: Small chocolate-brown, caducous.
Spines: Very long, absent on the young segments, appearing sporadically on the older segments, usually 1, sometimes 2 or 3 from an areole, stiff, spreading, white becoming grey with a light brown tip, straight or twisted, 7 to 15 cm long. The old trunk-areoles sometimes bear as many as eight spines.
Flowers: Gynodioecious. Shiny carmine or red, 5-7 cm long and 35-50 mm in diameter. Pericarpel 40-50 mm long, with white areoles, those of the upper edge covered with yellowish glochids and scales. Perianth segments fleshy in consistency, external ones wine-red to blood-red, then yellow with a blood-red point. Internal ones vermilion. Throat whitish with a green ring to the base of stamens. Stamens seismonasty present (the stamens are sensitive and move in response to shock due to changes in turgor pressure caused by vibration). Filaments pink with a white base; anthers white to cream. Style white; stigma greenish-white, with 7-8 lobes. Nectar chamber present.
Female flowers: With stamens entirely aborted, but with fertile pistils.
Hermaphrodites flowers: With both male (stamens) and female (Pistils) reproductive organs. Under experimental conditions female fertility is as high as that of hermaphrodites, however, seeds from females always result from cross-pollination and from more severe ovule selection (ovule number is higher in female flowers). Under natural conditions female plants are reproductively more successful than hermaphrodites.
Fruit: Pear-shaped to globular, 5-7 cm long 3-4 cm in diameter, greenish yellow passing to wine-red at maturity. The fruits are fleshy but unpalatable.
Seeds: Elliptic, around 8 mm broad, 1.5 to 2 mm white to brownish, glabrous thick, with broad, thick, white margins. Aril hard and woody. 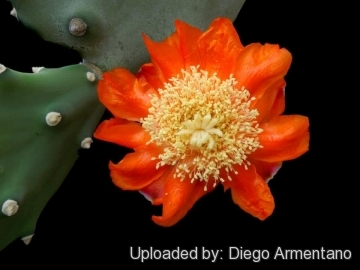 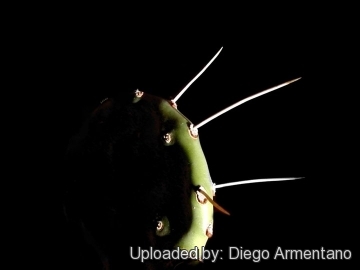 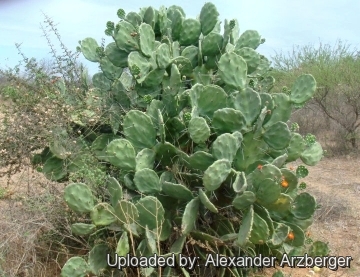 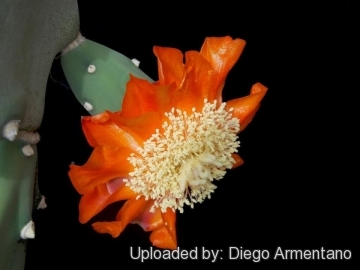 Cultivation and Propagation: Opuntia quimilo is a low maintenance plant that tolerate considerable neglect and will naturalize. Easy to cultivate outdoor in warm dry climates.
Growth rate: it is a relatively fast growing species that can form large clumps just in a few year.
Soils: It grows well in sandy or gravely, well-drained soils. May be grown in clay soils as long as drainage is good and soils do not remain wet, it is very adaptable both in acid, neutral and basic (alkaline) soils, but prefers a pH in the range 6 to 7,5. For pot culture it needs regular cacti soil with little organic matter (peat, humus).
Repotting: Since they are big-sized plants, they need plenty of space for their roots. Repotting should be done every other year, or when the plant has outgrown its pot. Use pot with good drainage.
Watering Needs: Must be kept fairly dry in winter but likes a reasonable supply of water in the growing season, but do not overwater and allow to dry fully before watering again, tolerate dry condition but suffer if exposed to prolonged and severe drought. A position at the base of a south-facing wall or somewhere that can be protected from winter rain is best for this plant, but is however resistant to moisture and rain. Care must be taken with watering as they tends to become swollen and untidy in growth habit if given too much water and shade.
Fertilization: During the growing season enrich the soil using a fertilizer rich in potassium and phosphorous, but poor in nitrogen, because this chemical element doesn’t help the development of succulent plants, making them too soft and full of water.
Sun Exposure: Full sun (only), in semi shaded position wont produce many flowers.
Hardiness: Reputedly sensitive to frost, but less so if kept on the dry side prior to, and during, cold weather (hardy to -5° C or less for short periods, depending on clone). Outdoors this plant is very adaptable, as long as you avoid excessive humidity in the winter months (in good drained soils).
Garden uses: Excellent as landscape or patio plant. It is suitable for “desert” or “Mediterranean” gardens, in association with other xerophytes. Where the open air cultivation is not possible due to the climate, it is to be cultivated in pot in order to shelter it in winter.
Pests & diseases: It may be attractive to a variety of insects, but plants in good condition should be nearly pest-free, particularly if they are grown with good exposure and ventilation.
Warning: Opuntias bear spines and glochids (stiff bristles on the surface of the cladode) that can be very irritating to the skin.
Propagation: Propagated almost exclusively by cuttings of leaf pads at any time in the growing season. It may also be propagated by seeds. Seeds germinate in 7-14 days at 21-27° C in spring, remove the glass cover gradually as the plants develops and keep ventilated, no full sun for young plants! The seedlings should not be disturbed until they are well rooted, after which they can be planted separately in small pots.