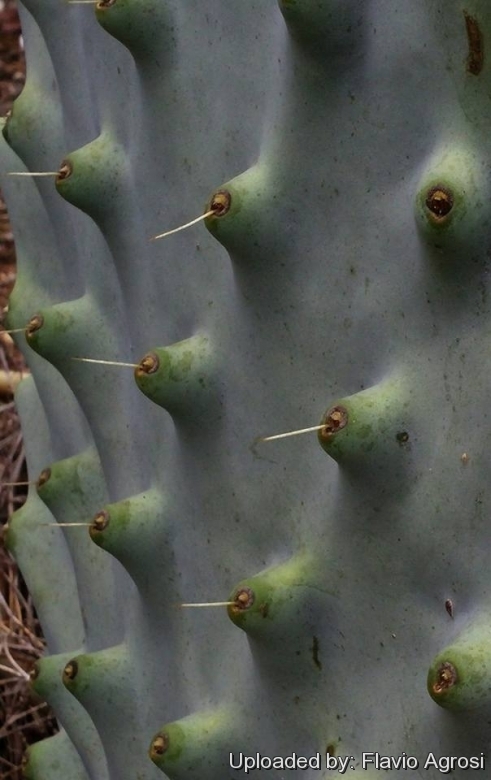 Origin and Habitat: Opuntia gomei is found near the coast of southern TX and inland 100 miles or more.
Type locality: USA, Texas, Loma Alta, near Brownsville
Habitat and ecology: Opuntia gomei inhabits the lower edges of the slight elevations in the delta of the Rio Grande River and often extends both into the huisache flats and the mesquite areas of higher elevations. It is, therefore, in all probability, able to thrive upon land containing considerable soluble salts. It is often found growing scatteringly upon land entirely devoid of brush and which periodically overflows. In these areas, however, it frequently gets killed out on account of the overflows which occur at irregular intervals, and again becomes established thinly before another period of overflow occurs.

See all synonyms of Opuntia engelmannii
back

Description: Gome's Opuntia (a.k.a. Opuntia gomei) is a poorly known and controversial cactus species that has been conflated with Opuntia engelmannii subsp. lindheimeri. It is a richly branched, emerging shrubs or small, shrubby trees up to 1 m in height and 8 (or more) meters in diameter, the old centres containing much dead material when plants are large. The segments are often scalloped more or leas raised at areoles and larger joints always more or lees wavy, bluish green, 30 to 40 cm long. Flowers red, red-orange or yellow. A spineless variety called ‘Old Mexico’ is known in the nursery trade; it forms large shrubs and, like the species, has large cladodes and the flowers yellow.
Derivation of specific name: Named for William Gome, a colleague of the author.
Stems: Main branches commonly on edge and secondary ones erect from them. Joints subcircular to ovate often tapered toward the apex, rarely blue-green, varying to sometimes slightly yellowish green, 90 to 40 cm. in diameter, or often in last year's joints only 20 cm. in diameter and then almost invariably sub-circular, more or leas raised at areoles and larger joints always more or lees wavy.
Areoles: Obovate, 6 to 10 mm. in diameter, bright brown when young, changing to dirty brown and finally to grey-black, mostly raised and surrounded by an irregular, dry, brown-grey, slightly cracked rim or area, varying from 21 to 5 cm. apart; glochids yellow, abundant, very prominent, about 1 cm. long, more abundant above, but often filling entire areole.
Spines: Yellow, somewhat flattened, often faintly annular, not twisted, 3 to 5 cm. long, upright, spreading, sometimes increasing irregularly with age, 0 to 5 in number, mostly 1 to 4.
Flowers: Yellow, stigma large, bright deep green, 9 to 10 parted.
Fruits: Reddish purple.

Subspecies, varieties, forms and cultivars of plants belonging to the Opuntia engelmannii group

Cultivation and Propagation: It is a low maintenance plant that tolerate considerable neglect and will naturalize, it is drought-tolerant; and suitable for xeriscaping. Easy to cultivate outdoor in dry, sandy or gravely, well-drained soils. May be grown in clay soils as long as drainage is good and soils do not remain wet, it is very adaptable both in acid, neutral and basic (alkaline) soils, but prefers a pH in the range 6 to 7.5. No serious insect or disease problems.
Watering Needs: Outdoors little or no water once established, in the green house irrigate regularly from March to october, keep fairly dry in winter, tolerate dry condition but suffer if exposed to prolonged and severe drought. A position at the base of a south-facing wall or somewhere that can be protected from winter rain is best for this plant, but is however resistant to moisture and rain.
Sun Exposure: Full sun (only), in semi shaded position wont produce many flowers.
Frost hardiness: They are reasonably cold hardy , tolerating temperatures down to -5° to -12° C (USDA: 8-10) depending on clone, they are also quite tolerant of winter wet. (In good drained soils)
Traditional uses: The fruit are edible and the tender joints can be coked as a vegetable. In medicine the plant are used to treat dyspepsia, mumps, swelling and in veterinary it is used to treat bruises. The joints are also a good food for cattle (after burning of spines)
Propagation: Propagated by cuttings of leaf pads at any time in the growing season. (Allow cut surface to callus over before planting).