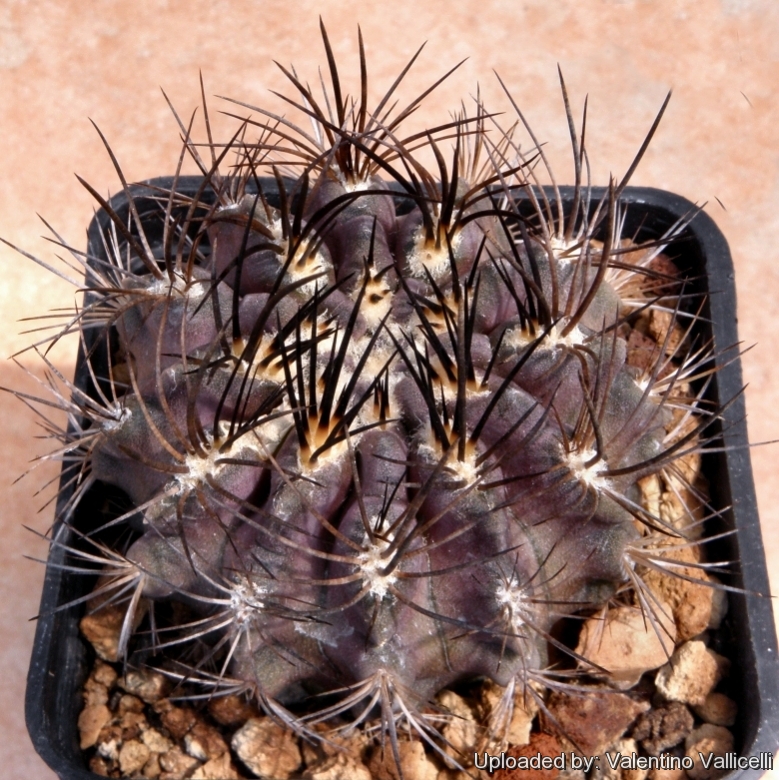 Origin and Habitat: Chanaral to Caldera, Region 02 Antofagasta, Chile.
Altitude: 0-300 metres above sea level.
Habitat: It is found in the coast and into the nearby hills mainly in dry sandy soils and rocky slopes and flats below the fog zone.

Description: Eriosyce pulchella is one of the many geografical form of the widespread and morphologically variable Eriosyce taltalensis. Many of its morphological and geographical variant was early classified as different independent species, but nowadays all this plant are considered part of a multiform species, where each form is linked to others by populations of plants with intermediate characteristics. Eriosyce pulchella is a smaller form very similar, if not the same, to Eriosyce taltalensis var. pygmaea with mostly pale white to pink flowers.
Habit: It is a spiny geophytic cactus with solitary (or sometime branching) stems rising barely above ground level (in habitat).
Stem: Globose or semi-globular to elongate (especially in cultivation less than 8 cm in diameter and 5 cm tall, dull dark green, in the sun often tinged with purple.
Roots: Fibrous, arising from a short, conical taproot.
Ribs: 8-13 vertical, forming tubercles with chin-like protrusions.
Areoles: Sunken, with creamy-white or yellowish felt.
Spines: Spines variable, tannish-brown, dull grey-brown or black, somewhat glaucous except at apex turning chalky white or grey as they ages, straight to curved.
Radial spines: 6-20 thin, more or less curved or twisted intergrading with the centrals 3-20 mm long.
Central spines: 1-4 strongger straight or barely curved, rarely somewhat obscurely hooked at the apex, up to 3 cm long.
Flowers: Closely packed apically in top 2 or 3 young areoles areoles of a rib, one flower to an areole, narrow to broad funnel-form or campanulate, 3-4 cm long, 2-3 cm in diameter creamy-white to pink. Pericarpel and tube very short (less than 2 cm long on the whole) with scales producing white woolly hairs and few twisting tan bristles up to 1 cm long in the upper pat of the tube. Tepals lanceolate up to 1,5 cm long, 2 to 3 mm broad, entire, uniformly coloured or slightly lighter near margins, outer segments darker and merging with brown and green tube scales almost black apically. Stamens numerous about 8 mm long, fuchsia purple, whitish at the base, anthers and pollen yellow. Style stout, fuchsia-purple 15-17 mm long, 1,5 mm in diameter in the middle, stigma lobes fuchsia purple about 3 mm long.
Blooming season: It has several flush of flowers in sequence at different times over an interval of several weeks from late spring/early summer to autumn, with heaviest flowering early and late in the period of time.
Fruits: Elongate red, a bit hairy, with seeds loose within, dehiscing by basal pores. 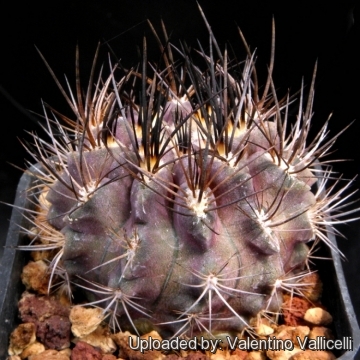 Cultivation and Propagation: Eriosyce pulchella is a slow growing but relatively easy to grow species, providing they are kept dry during autumn and winter and rot prone if kept in a non ventilated place.
Soils: Require a very fast mineral draining drying soil (70-80% grit and 20-30% of land soil). To prevent rottenness it is also advisable to surround its root neck by very rough sand or grit, this help a fast water drainage and an appropriate air circulation.
Watering Needs: Root prone it needs good drainage, waterings should regular in summer (do not overwater), to keep the plant compact and not become excessively elongated and unnatural in appearance. During the winter quiescent period, or when night temperatures remain below 10° C, it must be strictly kept dry since it is very sensitive to any moisture excesses.
Fertilization: During the beautiful season it’s good to enrich the soil using a fertilizer rich in potassium and phosphorous, but poor in nitrogen, because this chemical element doesn’t help the development of succulent plants, making them too soft and full of water.
Exposure: Requires strong sun exposure to develop good spinal growth (maximum brightness, sunlight accepted), but tolerate light shade. Some light shadow my be useful in the hottest summer days.
Frost Tolerance: Hardy to at least -5°C for a short period but cannot tolerate long standing freezing temperature, and for an healthy cultivation ensure a minimum temperature of 5° C. Assure a good ventilation. USDA Hardiness Zone 9b and 11.
Heat tolerance: Good heat tolerance, but in warmer climates it should be protected from excessive heat and too much sun sun in summer.
Maintenance: Repot in the spring, when its roots become cramped. Generally, it should be repotted every other year in order to provide fresh soil. After repotting, do not water for a week or more.
Propagation: Usually propagated from Seeds. (seldom produces offsets). Sow the seeds in spring in a well-aerated compost at a temperatures of 22-24°C . Stand the pots in water, moisten thoroughly and drain. Scatter and press lightly the seed onto the top of the compost. But do not cover the small seeds with compost. Secure a polythene bag around the pot or cover the container with glass or and place in a warm shaded place. If possible, germinate in a propagator. Some seedlings may appear within a week or 10 days others will take longer. At lower temperatures, germination usually takes considerably longer. Once germination has taken place, remove gradually the glass or plastic and move into a good light but not in direct sun. If the young plants are exposed to too much sun, or the compost dries out, they may stop growing and often turn red; once they stop, it is often difficult to persuade them to start growing again. Never let the pots dry out-but don't saturate them either. A sodden compost is as harmful as a dry one. The seedling growth is rapid. But the seedling are often grafted because the plants on their own roots (especially the bigger ones) are extremely prone to root rot. In fact the best and older specimens are the grafted ones.