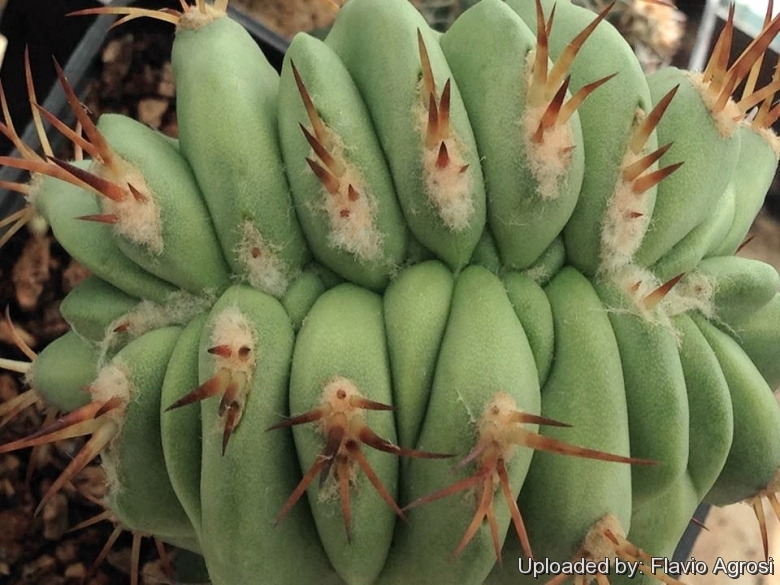 Origin and Habitat: Garden origin. The natural species comes is endemic to a restricted area and there are only two locations centred around the localities of Blanco Encalada and El Cobre, south of Antofagasta. Chile.

Description: Copiapoa solaris is a slowly clumping cactus with a cushion like growth form. They are incredibly slow growing, but old plants in habitat - over centuries - will form large cushion up to 2,30 m of diameter and 90 cm tall with hundreds of heads.
Crested form: The beautiful and very rare crested form (Copiapoa solaris f. cristata) is sought after by specialized collectors and impassioned for its unique tufted appearance. It forms fan-shaped stems densely covered by stout,slightly bent amber/yellow spines, reddish-brown when young and very woolly areoles.
Stems: Fan shaped 8-12 cm in width, green to grey-green with a waxy coating presumably to prevent desiccation in it's extremely dry environment.
Ribs: Elevated, up to 3,5 cm tall, not tuberculate.
Spines: Yellow, amber or reddish-brown when young, later chalky-grey, robust, straight or slightly bent, long and interwoven.
Central spines: 2-5, 2-6 cm long.
Radial spines: 7-10, 2-3 cm long.
Flowers: Up to 3 cm long and in diameter, funnelform, yellow, occasionally with a pink or reddish coloured throat. The flowers are often almost concealed among the dense wool and spines at plant apex. Flower tube woolly (Hence the name Pilocopiapoa = hairy Copiapoa). It needs a lot of sunlight to bloom, so it's pretty rare to have blossoms when in cultivation in greenhouses.
Fruits: Woolly, up to 15 mm in diameter. 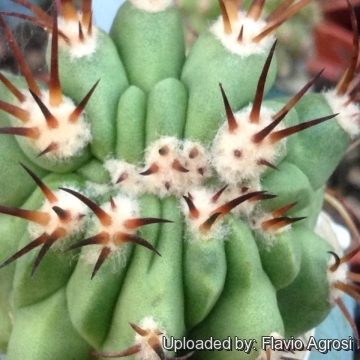 Cultivation and Propagation: These plants will tolerate sun and heat, but not extended periods of frost. The crested form is more frost sensitive and should not be kept at less than -0°C . Grow them in rich, porous, sandy soil, and let their soil dry out between waterings. If potted, repot in the spring, if their roots become cramped. Generally, they should be repotted every other year in order to provide fresh soil. However, this doesn't necessarily mean they'll need larger containers. Fill about a quarter of the pot with broken crocks, gravel, etc. to promote good drainage. After repotting, do not water for a week or more. The crested plants enjoy a warm sunny environment and for more speedy growth a light position on a higher shelf with light feeding and rainwater given to the bottom of the plant will ensure success, especially with rooted detached branches, which do well in these conditions.
Propagation: Grafting. It can also be increased by cuttings, which will take root in a minimum temperature of 20° C. Cuttings of healthy shoots can be taken in the spring and summer. Cut the stem with a sharp, sterile knife, leave the cutting in a warm, dry place for a week or weeks (depending on how thick the cutting is) until a callus forms over the wound. Once the callus forms, the cutting may be inserted in a container filled with firmed cactus potting mix topped with a surface layer of coarse grit. They should be placed in the coarse grit only; this prevents the cut end from becoming too wet and allows the roots to penetrate the rich compost underneath. The cuttings should root in 2 to 6 weeks.