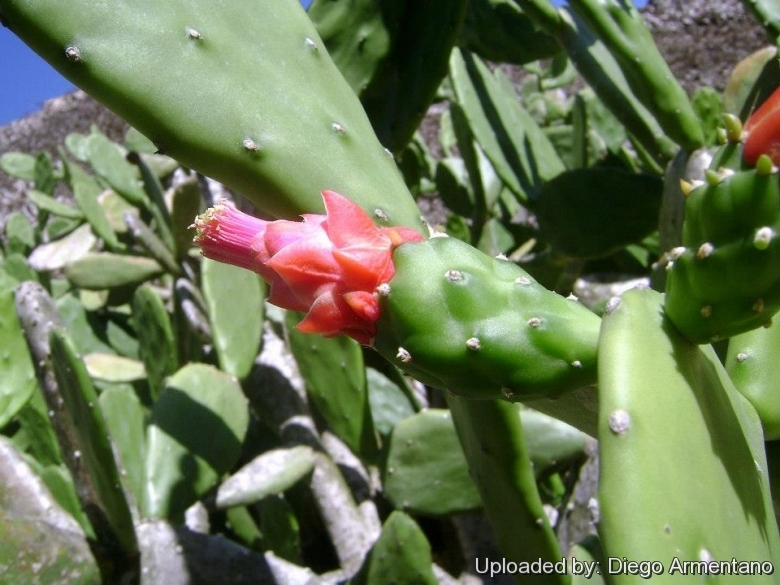 Origin and Habitat: According to Hunt et al. 2006 the species is only native to Mexico but is widely distributed the west Indies and tropical America. However, the precise native range is not known. It is now cultivated and often naturalized
throughout warmer regions of the world.
Habitat and Ecology: The species occurs in tropical dry forest. This species grows well in a range of conditions. Humid, dry, moist, misty, full sun, partial shade - it just keeps growing. And, as the fruits are very attractive for birds and bats, the seeds are spread everywhere, and so this species propagates efficiently, turning out to be invasive under optimal conditions. Given that is not possible to establish which are wild populations it is impossible to determine the threats.

Description: Nopalea cochenillifera is a well-known shrubby or treelike cactus with several main branches from the base and a large almost hemispherical top often 3 to 4 meters high or more. It was used in the past for the production of the cochineal insect (Dactylopious coccus Costa). A deep crimson dye is extracted from the female cochineal insects. Cochineal produces a range of scarlet, pink and other red hues from the dye found in cochineal insects, carminic acid. It was used for dyeing fabric, fibres, and wool. This species may have been selected for spinelessness in Mexico, much like Opuntia ficus-indica, to ease the culturing.
Stems: Trunks up to 20 cm thick. Cladodes (joints) narrowly obovate, oblong, sometime slightly falcate, ascending or spreading, 8-35 cm long (sometimes to 50 cm long), 5-12(-15) cm wide, green, bright green at first.
Areoles: Widely separated (2-3 cm apart), woolly tawny, whitening with age.
Glochids: Numerous, but inconspicuous and caducous.
Spines: None or rarely 1-3 minute or stout, straight or curved, usually less than 1 cm long (occasionally to 2 cm long), brown, aging gray, develop on the older joints.
Leaves: Small, awl-shaped, soon deciduous.
Flowers: The flowers are developed at the top of the joints, usually in great abundance. They are narrow, erect, bright red to rose coloured, 5-6(-7) cm long (from base of ovary to tip of style) and 12-15 mm in diameter. Pericarpel nearly globular, 2 cm long, with low diamond-shaped tubercles, its areoles bearing many glochids. Outer tepals broadly ovate, acute, scarlet. Inner tepals a little longer than the sepals, spatulate, otherwise similar, persistent. Stamens pinkish, exserted 1
to 1.5 cm beyond the petals. Stigma-lobes 6 or 7, greenish, exserted beyond the stamens. Style, white, swollen just above its base into a broad disk. Nectar chamber elliptic to obconic.
Blooming season: Winter (Sep-Mar)
Fruit: Ellipsoid, about 25-38(-50) mm long, 25-30 mm in diameter, red, fleshy, with areoles well distributed, rarely maturing in greenhouse plants.
Seeds: About 3-5 mm long and 1.5-3 mm wide tan to grey.
Chromosome number: 2n = 22

Notes: Nopalea cochenillifera (Linnaeus) Salm-Dyck, Cact. fort. Dyck. 1849. 64. 1850 in: N. L. Britton, J. N. Rose: “The Cactaceae. Descriptions and Illustrations of Plants of the Cactus Family.” Vol I, pages 34-35, tab IV, The Carnegie Institution of Washington, Washington 1919.
The specific name of this plant was given because it is one of the species of cactus from which cochineal was obtained. Cochineal was long supposed to be a vegetable product; it was not until 1703 that, by the aid of the microscope, it was definitely determined to be of insect origin. The cochineal industry is of prehistoric origin. The Spaniards found it well established when they conquered Mexico in 1518, and began at once to export the product. As early as 1523 Cortez was ordered to obtain and send to Spain as much as he possibly could, while during the early colonial days it was one of the chief articles of tribute to the crown. From Mexico and Peru the industry was taken to southern Spain, India, Algiers, South Africa, New Granada (Colombia), Jamaica, and the Canary Islands. The industry grew rapidly and was very profitable. The greatest source of the cochineal was probably the Canary Islands... ...The cochineal insects were placed on the joints or branches of the cactus plants, where they rapidly multiplied and in about four months were collected by brushing them off into baskets or bags. Then, after being dried in various ways, they became the cochineal of commerce. Two or three such collections were made each year. The cactuses upon which the cochineal was raised were often grown in large plantations called nopalries, sometimes containing 50,000 plants in rows about 4 feet apart. Since the introduction of the aniline dyes, the cochineal industry has almost disappeared. The cochineal colors, while brilliant and attractive, are not very permanent.
Peter Hanelt, Institute of Plant Genetics and Crop Plant Research, W. Kilian “Mansfeld's Encyclopedia of Agricultural and Horticultural Crops: (Except Ornamentals)” Springer Science & Business Media, 10/Apr/2001:
....The dye can be used as a natural colouring of foods, for soft drinks and many cosmetics (including lipsticks).... .... But recent demands for natural dyes, (synthetic ones have been linked to cancer) resulted in new interest in the cochineal dye. 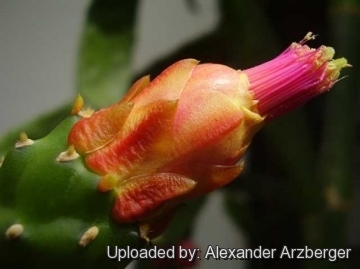 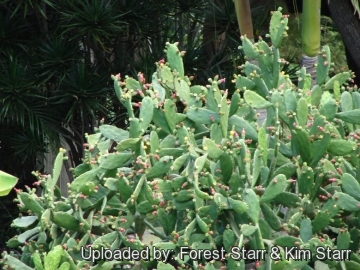 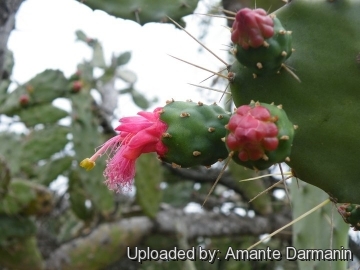 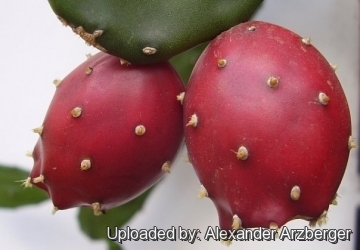 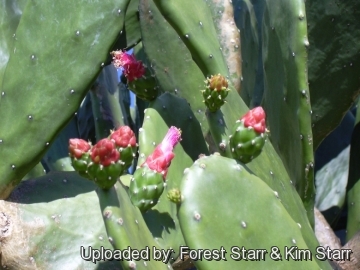 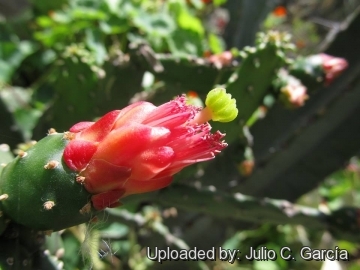 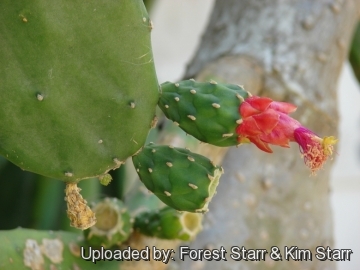 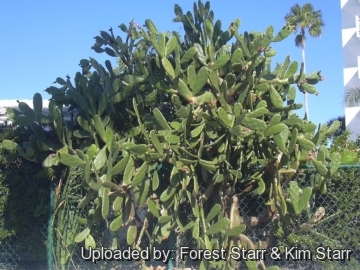 Cultivation and Propagation: Nopalea cochenillifera is a a much decorative cactus easily found in cultivation. It is a summer grower species that offers no cultivation difficulties. This cactus can be grown as a shrub, and may look attractive as it, and the rare spines won´t do much harm, but on the fruits the spines are more rigid, and tend to stick on you and penetrate in your skin. Its green joints and red flowers provide a striking accent for an otherwise dormant cactus garden. This is a good plant for hummingbirds
Soil: It will grow in any kind of drained soil, and will resist to droughts, but prefer regular waterings. In pot culture use a draining substratum, as it is sensitive to rottenness when in presence of humidity and low temperatures and let the soil dry out between waterings.
Repotting: Repot in the spring, when their roots become cramped. Generally, they should be repotted every other year in order to provide fresh soil. After repotting, do not water for a week or more.
Water: In summer, during the vegetative period, it must be regularly watered, but allowing the substratum to completely dry up before irrigating again (but do not overwater ); in winter, it’s to be kept dry. Preferable not to water on overcast days, humid days or cold winter days.
Hardiness: It is not very frost resistant cactus, hardy to -2° C or less if very dry. However in cultivation it is better not to expose it to temperatures lower than -5° C, even if in an aerated and protected location, in order to avoid the formation of anti-aesthetic spots on the epidermis. In presence of high atmospheric humidity avoid any frost as it is particularly sensitive to root rot. It can handle extremely high temperatures in summer.
Exposure: Outside full sun or afternoon shade (but adapt to shade too), inside needs bright light, and some direct sun.
Use: It is suitable for “desert” gardens, in association with other xerophytes. Where the open air cultivation is not possible due to the climate, it is to be cultivated in pot in order to shelter it in winter. In Mexico the stems are eaten by removing the fibrous surface off the stem, although it´s not the tastiest food in the world. The fruits are edible too. Fruits and cladodes are used in folk medicine. Its also an important edge plant and the cladodes are used for forage and fodder, and wood has been used in making furniture.
Warning: It is armed with treacherous spines that are extremely sharp (This is one of the most dangerous of all cactus). Handle it with extreme caution, and keep it away from gangways and areas frequented by children and animals. Spines must be meticulously removed with tweezers.
Propagation: Can be propagated by cuttings and seeds (these need to be fermented, to simulate the digestive tract of the natural dispersors). Prickly pear pads root easily and grow rapidly when placed in loose, well-draining soil.