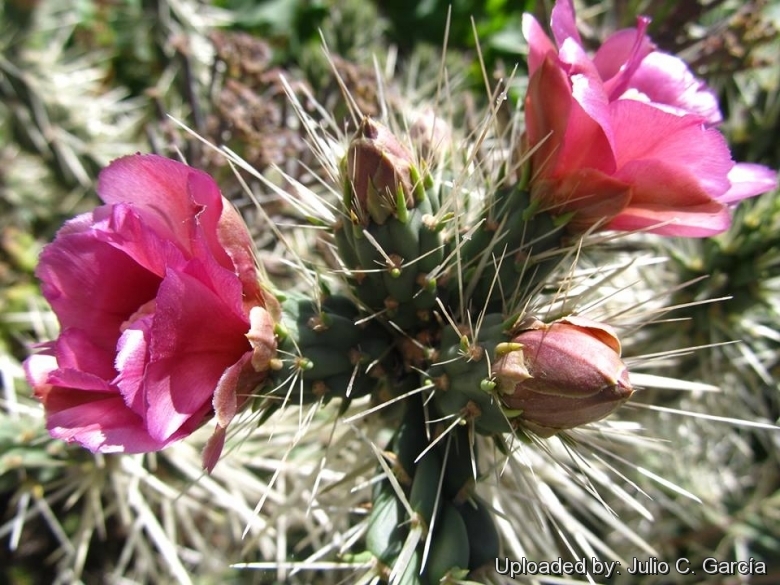 Origin and Habitat: Hidalgo, Mexico, Puebla, and Tlaxcala, Mexico.
Habitat and Ecology: Cylindropuntia rosea occurs in xerophyllous scrub and prefers disturbed habitat and calcareous soils. This species (like most Cylindropuntia) spread via movement of detachable stems that are capable to form roots when they come in contact with the ground. The population size and trend of the species is unknown. The threats to this species are unknown.

Description: Cylindropuntia rosea is a very spiny shrubby cactus, branching basally with ascending stems, 20-50 cm high. The long and very sharp spines posses a characteristic papery detachable sheath. There is uncertainty about the validity of this species. It could be both Cylindropuntia imbricata (Haw) Knuth or a form of Cylindropuntia tunicata (Lehm) Knuth with a different flower colour which is deep pink, this form is described by Rose as Cylindropuntia pallida (Rose) Knuth .
Stem segments: Cylindrical, growing end to end, greygreen, 10-15 cm long, 1.6-2.5 cm in diameter, with distinct tubercles.
Areoles: Large, 2-3.5 cm apart.
Leaves: Thin subulate, caducous.
Glochids: Yellow, 2-5 mm long.
Spines: 4-9, sometimes only one, needle-like, yellow to reddish to grey, 1-4 cm long. Sheaths papery, yellowish, not completely covering the spines.
Flowers: Cylindropuntia rosea is not a reliable bloomer. When flowering finally occurs, the flowers will be a beautiful rose colour up to 3.8-4 cm long. The flowers are developed always at the top of the stems.
Blooming season (in habitat): It flowers in summer between June and July.
Fruits: Obconical to obovoid, yellow, spiny, 1.6-1.8 cm long, 1.1-1.4 cm in diameter, with distinct tubercles. The fruit have been regarded as not producing seeds at all, but recent studies discovered fruits containing seed. 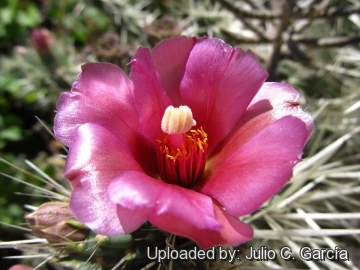 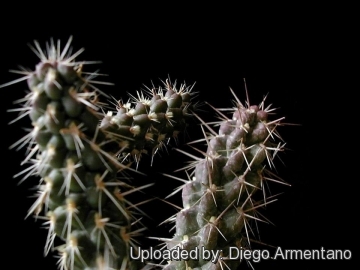 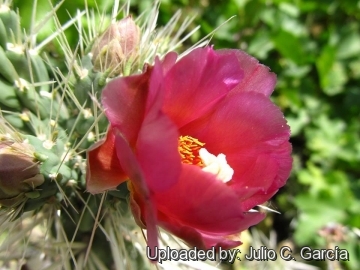 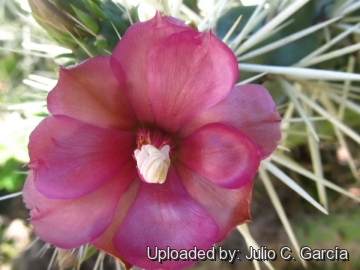 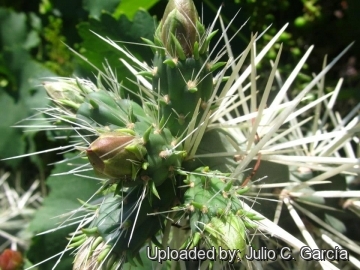 Cultivation and Propagation: Cylindropuntia rosea is a a much decorative hardy cactus easily found in cultivation. It is a summer grower species that offers no cultivation difficulties. Its cylindrical densely spiny joints provide a striking accent for an otherwise dormant cactus garden.
Soil: Use a very a particularly draining substratum, as it is sensitive to rottenness when in presence of humidity and low temperatures and let the soil dry out between waterings, since it's natural habitat is in sandy or gravelly, well draining soils.
Repotting: Repot in the spring, when their roots become cramped. Generally, they should be repotted every other year in order to provide fresh soil. After repotting, do not water for a week or more.
Water: In summer, during the vegetative period, it must be regularly watered, but allowing the substratum to completely dry up before irrigating again (but do not overwater ); in winter, it’s to be kept dry. Preferable not to water on overcast days, humid days or cold winter days.
Hardiness: It is a quite frost resistant cactus, hardy to -7° C (- 12° C or less if very dry). However in cultivation it is better not to expose it to temperatures lower than -0° C, even if in an aerated and protected location, in order to avoid the formation of anti-aesthetic spots on the epidermis. In presence of high atmospheric humidity avoid any frost as it is particularly sensitive to root rot. USDA Zone 7-10. It can handle extremely high temperatures in summer.
Exposure: Outside full sun or afternoon shade, inside needs bright light, and some direct sun.
Use: It is suitable for “desert” gardens, in association with other xerophytes. Where the open air cultivation is not possible due to the climate, it is to be cultivated in pot in order to shelter it in winter.
Warning: It is armed with treacherous spines that are extremely sharp (This is one of the most dangerous of all cactus). Handle it with extreme caution, and keep it away from gangways and areas frequented by children and animals. Spines must be meticulously removed with tweezers.
Propagation: Stem division. Prickly pear pads root easily and grow rapidly when placed in loose, well-draining soil.