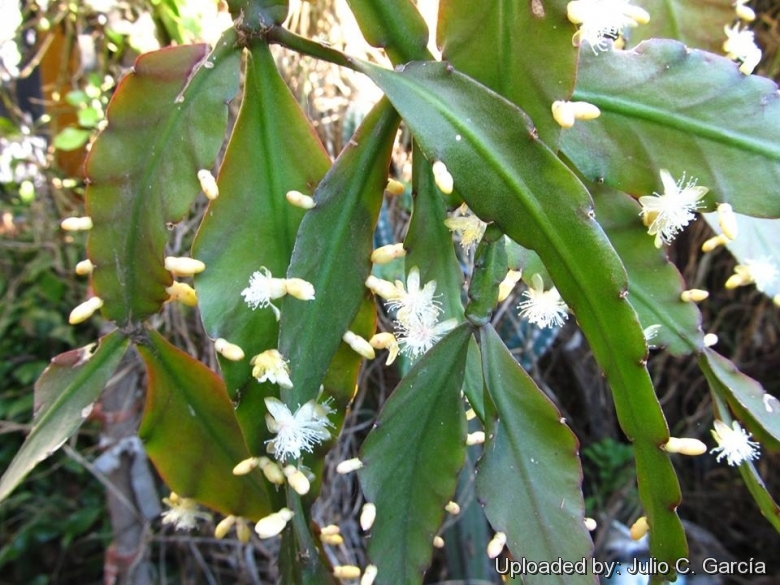 Origin and Habitat: Southern Bahia, Espirito Santo, Rio de Janeiro, and Sao Paulo, Brazil (area of occupancy of less than 2,000 km2).
Type locality: On Ilha Grande, Brazil.
Altitude range: It occurs from sea level up to 2,000 metres above sea level.
Habitat and Ecology: It is a humid forest element: epiphyte in very shaded Mata atlântica, at low elevations. It is a very localized and fragmented species as it only occurs in very humid places. The population is declining because of habitat destruction due to expanding agriculture and urbanization plus logging, especially in the northern part of its range. The northern-most localities have probably been lost.

Description: Rhipsalis oblonga is a semierect to pendent, epiphytic or lithophytic shrubs, 2.50 m long, with main stems terete at base becoming flattened above and branching apical or lateral. It is a very free-flowering species with pinkish-white fruits.
Stems: Dimorphic. Main branches terete below, three-angled, or winged more or less flattened above up to 20 cm long and 2 cm across, freely emitting aerial roots. Ultimate branches narrowly-oblong, very thin, flattened, 5-9(-15) cm long, 3-6 cm cm broad, ca.1 mm thick away from midrib, cuneate to truncate at base, truncate at apex, with prominent veins, dark to pale green or olive-yellow green, sometimes purplish, margins wavy to plane, crenate and lobed.
Areoles: Between the indentation, 2-4 mm from branch segment margin, 1.4-3.3 cm apart, first of segment 3-5.5 cm distant from segment base; when sterile 1-2.5 mm diam, with vestigial hairs and scales; when fertile woolly, 1-2.5 mm on diameter, with 1 acicular scale, scarce marginal hairs and sometimes bearing 1 or more small bristly spines after flowering
Flowers: 1-2 per areole, borne along the sides of the branches, solitary at the areoles, rotate, yellowish white, to 12-18 mm long. Sepaloid tepals 3-4, interior petaloid tepals 5, reflexed, greenish yellow rarely with reddish apex. Stigma (3-) 4-5, up to 3 mm long. Stamens whitish numerous.
Blooming season It flowers during the rainy season
Fruit: Globular to short-oblong, 3-7 long, 4-7 mmin diameter, greenish translucent, rose pink at apex to nearly white at maturity, naked, crowned by the withered perianth.
Similar species: Rhipsalis oblonga is is very closely related to Rhipsalis crispata, and also very similar to Rhipsalis goebeliana from Bolivia and to Rhipsalis occidentalis from northern Peru, southern Ecuador and Suriname. It is sometimes encountered in cultivation under the inadequately typified name, Rhipsalis rhombea. 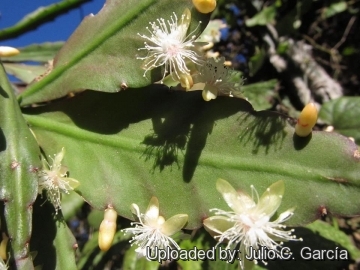 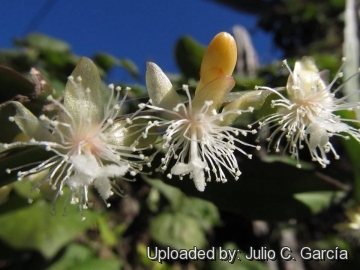 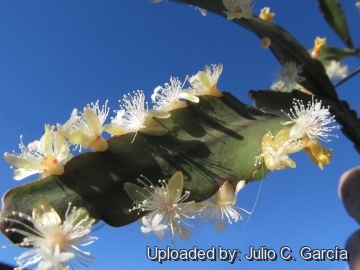 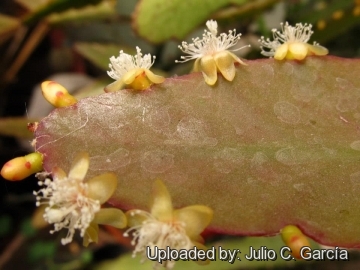 Cultivation and Propagation: Rhipsalis oblonga is among the easiest to cultivate epiphytic cacti and tolerates neglect. This forest cactus tends to be long lived, but appears to be rare in cultivation, where it needs some shade and high humidity to succeed.
Exposure: This plant (as with all Rhipsalis) prefers partial shade.
Watering: It requires ample summer water (more than other cacti), but allow soil to dry slightly between waterings.
Soil: These cacti won't want a normal cactus soil but will prefer to be in a soil largely composed of organic material, such as peat or sphagnum moss, This type of soil would normally be used for orchids, bromeliads or other epiphytic plants.
These forest cacti tend to be long lived.
Hardiness: Frost tender. It needs night-time temperatures no cooler than 5° C, especially in the winter.
Special requirements: These plants bloom profusely if grown in an even, high temperature, but significantly less if the temperature fluctuates between 4°C and 18°C. They drop their buds easily if they are moved. Once flower buds have formed, do not move the plant, as slight changes in environment may cause the buds to drop.
Propagation: Stem cuttings.