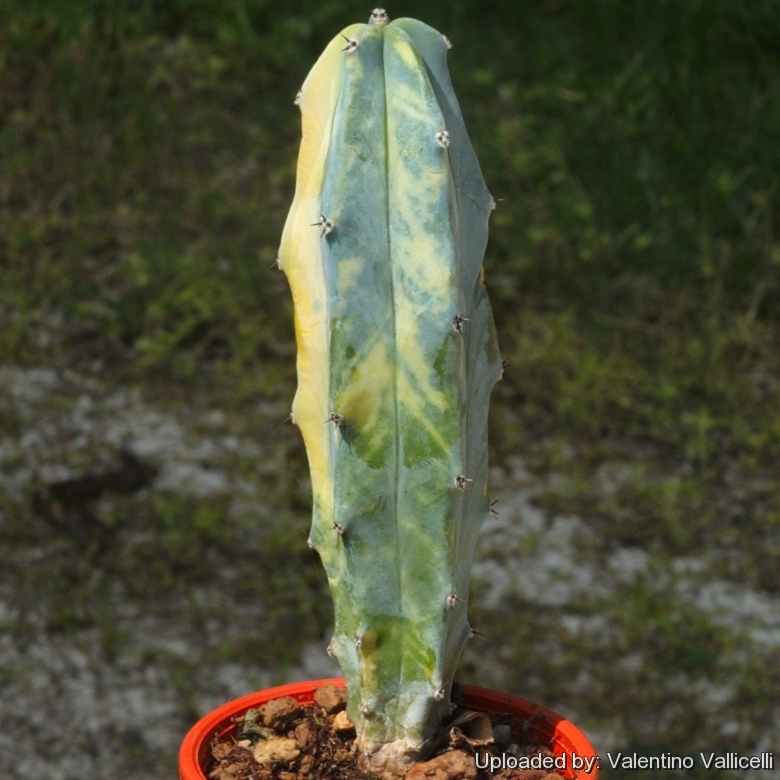 Origin and Habitat: Garden origin (Nursery produced cultivar). The original natural habitat of this species is northern central Mexico down to Oaxaca.

Description: The classical Myrtillocactus geometrizans ( a.k.a. “Blue Candle Cactus”) is a highly branched columnar candelabra like tree cactu swith very characteristic waxy blue stems growing closely together. In nature grows up to 4.5 m tall, with the crown reaching up to 5 m in width.
Variegated form (forma variegata): The variegated cultivars Myrtillocactus geometrizans f. variegatus has sectors, patches or stripes with distinct shades of yellow. A very few variegated plants sprout unpredictably time by time among normal green seedling and are very rare. Plants with variegated stems are often attractive and highly prized. It seems to be a pretty variable plant with several and variously coloured clones.
Stems: Glaucous (blue grey) with sectors, patches or stripes with distinct shades of yellow. Up to 4-8 cm thick. They have 5-8 ribs with areoles about 2.5 cm apart.
Spines: Each areole may have up to 5-9 spines, but generally they have 3-5 spines about 5-12 mm long but not awful.
Flowers: Rather smaller (2.5-3.7 cm) in relation to stem, greenish white.
Blooming season: March. Starts blooming when it is about 60 cm tall.
Fruit: Very sweet, edible, dark red, oblong fruits 8-20 mm in diameter.

Subspecies, varieties, forms and cultivars of plants belonging to the Myrtillocactus geometrizans group

Notes: A variegated plant has sectors, patches or stripes with two or more different colours, even distinct shades of green. Plants with variegated stems or leaves are often attractive and highly prized. In most species the stems or leaves are normally green, and variegated epidermis is an uncommon mutation, termed a chimera. A chimeral variegation is due to losing the ability to produce chlorophyll in some of the plant’s tissue, so that this tissue is no longer green. Tissues lacking chlorophyll are usually white or pale yellow coloured (due to carotenoid pigments) or red (due to betalain or anthocyanin pigments) contrasting with the normal green tissue. There are several forms of variegation, depending on the tissues that have been affected. The variegation in some forms is unstable. The extent and nature of the variegation can vary, and sometimes the plant will return to the green form. In others it is stable and does not change under normal conditions. Because the variegation is due to the presence of two kinds of plant tissue, propagating the plant must be by a vegetative method of propagation that preserves both types of tissue in relation to each other.

Cultivation and Propagation: Variegated cacti are regarded as choice and difficult in cultivation, but despite that many of them are relatively easy to grow. But be aware that they cannot tolerate prolonged exposure to direct sun light (especially during the hottest summer days), so grow them in half-shade or under filtered sun. They are sometime seen as grafted plants, but some of this colourful plants (those with some chlorophyll) are able to grow on their own roots and are priced by collectors.
Soil: Use mineral well-permeable substratum with little organic matter (peat, humus).
Watering: Water sparingly from March till October, and keep perfectly dry in winter, at temperatures from 10 to 25 degrees centigrade. (In general these plants are more tender and cannot endure freezing temperatures). In the rest period no high atmospheric humidity!!
Propagation: By seeds, grafting or cutting. Because the variegation is due to the presence of two kinds of plant tissue, propagating the plant must be by a vegetative method of propagation that preserves both types of tissue in relation to each other. A most common way way to cultivate this partially de-coloured cultivars is to graft them onto another cactus which has chlorophyll and which will provide sugar to the mutant scion. The chlorophyll containing bottom part of the graft, called the stock, can be any number of different columnar cactus species.
Remarks: Seeds from variegated parents often give raise to some variegated seedlings too.