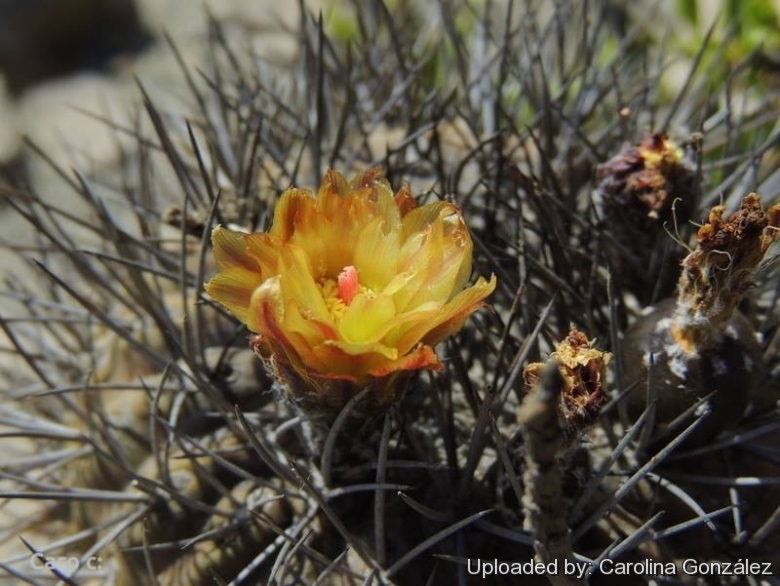 Origin and Habitat: Lower Choros valley from Huasco south to Quebrada Las Palmas west of Trapiche and adjacent areas, Region 03 Atacama, Chile (extent of occurrence about 16,000 km2).
Altitude: 0-1000 metres above sea level.
Habitat: It grows on rocky soil in thorny scrub, mostly in coastal areas where very little else grows. It's a very drought tolerant species. Despite the lack of rain where it lives, the extreme aridity is attenuated by the frequent, often dense, coastal fogs. The fog tends to concentrate in the form of a cloud band at an estimated height of 500 to 850 metres. It shows a recurrent pattern; usually it is overcast in the early mornings, the clouds dissipating during the late morning and returning during the late afternoons. The plant grows often buried in the ground and is almost impossible to spot without the flowers. Eriosyce heinrichiana is abundant and the population seems to be stable, it is only affected by localized threats that are not leading to a continuing decline of the population, and it is found within protected areas.

Subspecies, varieties, forms and cultivars of plants belonging to the Eriosyce heinrichiana group 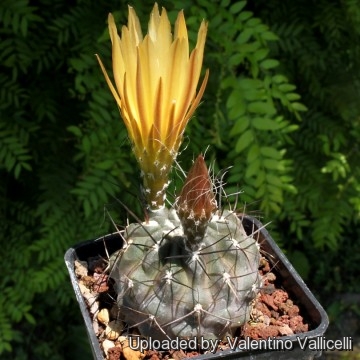 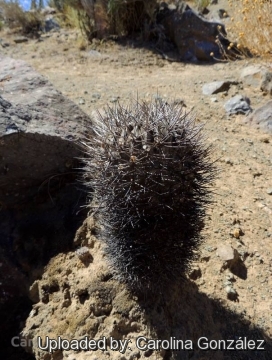 A large mature specimen in habitat. Photo by: Carolina González 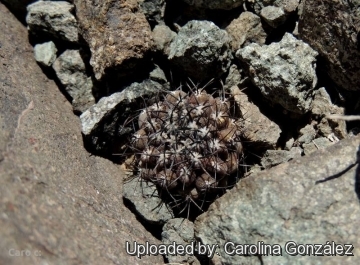 In habitat among rocks. Photo by: Carolina González 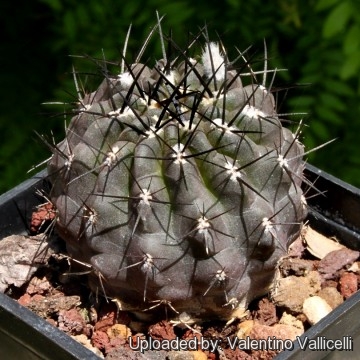 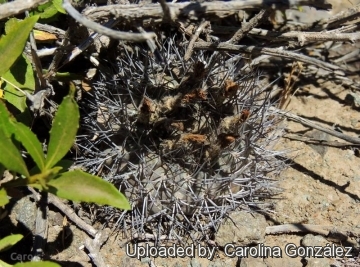 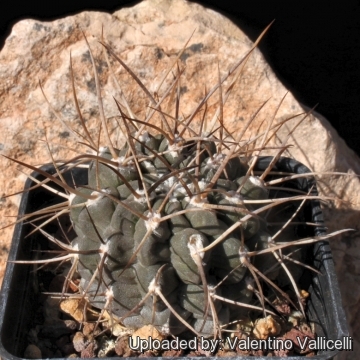 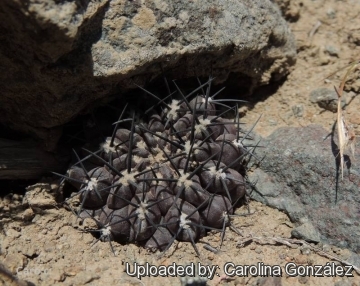 In habitat among rocks. Photo by: Carolina González
Send a photo of this plant.

Cultivation and Propagation: Eriosyce heinrichiana is a slow growing but relatively easy to grow species, providing they are kept dry during autumn and winter and rot prone if kept in a non ventilated place.
Soils: Require a very fast mineral draining drying soil (70-80% grit and 20-30% of land soil). To prevent rottenness it is also advisable to surround its root neck by very rough sand or grit, this help a fast water drainage and an appropriate air circulation.
Watering Needs: Root prone it needs good drainage, waterings should regular in summer (do not overwater), to keep the plant compact and not become excessively elongated and unnatural in appearance. During the winter quiescent period, or when night temperatures remain below 10° C, it must be strictly kept dry since it is very sensitive to any moisture excesses.
Fertilization: During the beautiful season it’s good to enrich the soil using a fertilizer rich in potassium and phosphorous, but poor in nitrogen, because this chemical element doesn’t help the development of succulent plants, making them too soft and full of water.
Exposure: Requires strong sun exposure to develop good spinal growth (maximum brightness, sunlight accepted), but tolerate light shade. Some light shadow my be useful in the hottest summer days.
Frost Tolerance: Hardy to at least -5°C for a short period but cannot tolerate long standing freezing temperature, and for an healthy cultivation ensure a minimum temperature of 5° C. Assure a good ventilation. USDA Hardiness Zone 9b and 11.
Heat tolerance: Good heat tolerance, but in warmer climates it should be protected from excessive heat and too much sun sun in summer.
Maintenance: Repot in the spring, when its roots become cramped. Generally, it should be repotted every other year in order to provide fresh soil. After repotting, do not water for a week or more.
Propagation: Usually propagated from Seeds. (seldom produces offsets). Sow the seeds in spring in a well-aerated compost at a temperatures of 22-24°C . Stand the pots in water, moisten thoroughly and drain. Scatter and press lightly the seed onto the top of the compost. But do not cover the small seeds with compost. Secure a polythene bag around the pot or cover the container with glass or and place in a warm shaded place. If possible, germinate in a propagator. Some seedlings may appear within a week or 10 days others will take longer. At lower temperatures, germination usually takes considerably longer. Once germination has taken place, remove gradually the glass or plastic and move into a good light but not in direct sun. If the young plants are exposed to too much sun, or the compost dries out, they may stop growing and often turn red; once they stop, it is often difficult to persuade them to start growing again. Never let the pots dry out-but don't saturate them either. A sodden compost is as harmful as a dry one. The seedling growth is rapid. But the seedling are often grafted because the plants on their own roots (especially the bigger ones) are extremely prone to root rot. In fact the best and older specimens are the grafted ones.