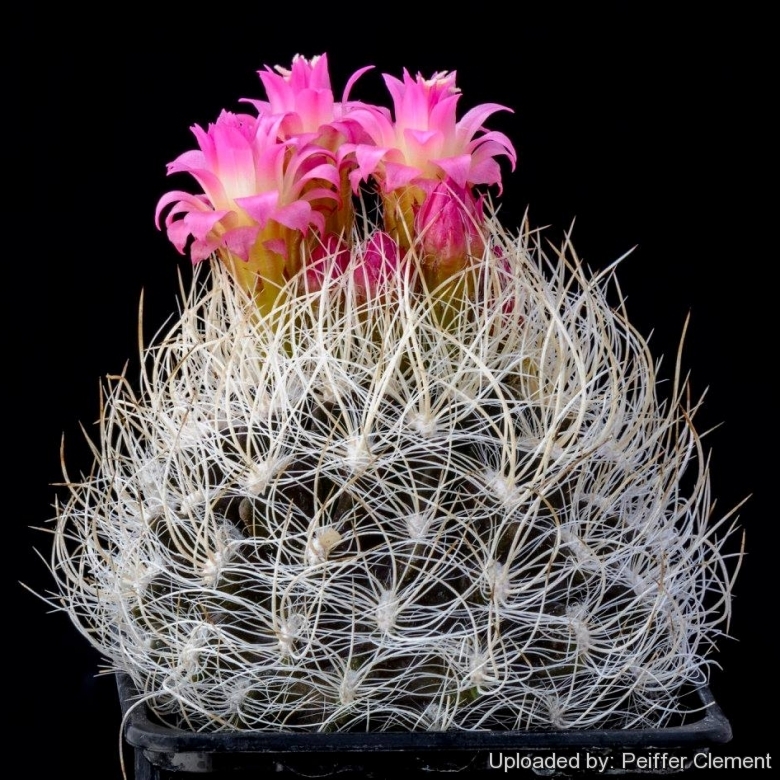 Origin and Habitat: East of Ovalle, Northern Chile at around 1200 metres above sea level.

Description: Neoporteria nidus a controversial species with its stem wrapped by very long curved spines, soft, grey and not-prickly. Short pink flowers with clearer throat up to 3 cm long manage to work their way through these spines. N. nidus belongs to the Eriosyce senilis complex. This complex comprises a large number of infraspecific taxa (such as: N. nidus, N. multicolor, N. gerocephala and others), differing in the length of the flower, the type of spines and other characters. The taxonomic and geographic boundaries among the segregate species or infraspecific taxa of E. senilis remain nebulous and controversial and it has not been clear whether they are independent species, varieties or the same plants. The length of the flower of N. gerocephala is given as 5 cm, while in the description of N. nidus, the length of the flower up to 3 cm is given as a  major differentiating feature, by the other hand the flowers of N. multicolor is given as 5 cm. Among these plants in habitat exist many transitional types, and in no place do pure populations exist sympatrically, and all taxa appear completely interfertile. Up to date most authors have dismissed Neoporteria nidus as perhaps not worthy of even varietal status, but it still has a value for a collector because they identify plants with particular characters.
Stems: Generally simple, somewhat glaucous, short-cylindrical, 5 cm long, 5 to 6 cm in diameter, the top covered by the slender ascending connivent spines.
Ribs: 16 to 18, obtuse, strongly tubercled.
Areoles: Large, circular; spines weak, numerous, sometimes 30 in a cluster, unequal, white, the longest 3 cm long, bulbose at base.
Flowers: Rather slender, 3(-4) cm long, various shades of purple-pink with clearer throat, inner perianth-segments narrow, acute; scales on the flower-tube woolly and setose. 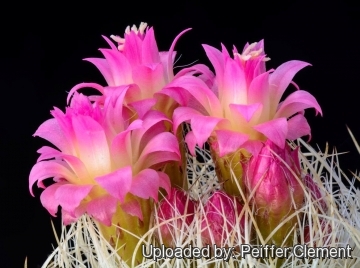 The gallery now contains thousands of pictures, however it is possible to do even more. We are, of course, seeking photos of species not yet shown in the gallery but not only that, we are also looking for better pictures than those already present. Read More...
Cite this page: "Echinocactus nidus" Text available under a CC-BY-SA Creative Commons Attribution License. www.llifle.com 14 Nov. 2005. 04 Mar 2021. </Encyclopedia/CACTI/Family/Cactaceae/2641/Echinocactus_nidus>