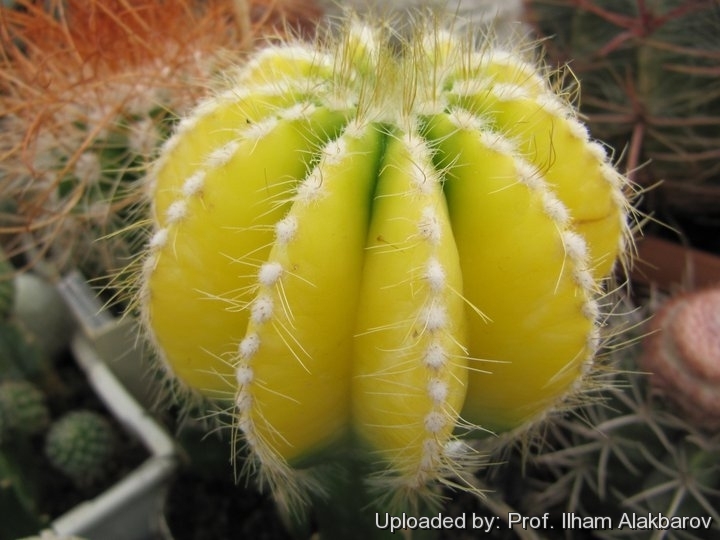 Description: Parodia magnifica, still known in cultivation with its old name Eriocactus magnificus, is a bluish-green geometric globular cactus with wool that grows in clusters and produce absolutely brilliant yellow flowers. These cacti develop a slight depression on the crown, which may become distorted with age. Parodia magnifica glistens under a haze of pale yellow spines. Cristate (wavy edged) forms are avalible but these are usually grafted plants.
Forma aurea or aurata (Yellow form): The schizochromic form (Parodia magnifica f. aurata) has pale yellow stems due to the absence (or reduced production) of chlorophyll pigments: every other pigment is present at normal levels, the dominant green colouration is lost, but will still more than likely have normal other pigments that give the yellow overall appearance of the stem. This plant with yellow stems is very attractive and highly prized. It is almost always seen grafted on stronger columnar species, and cannot can be grown on its own roots. However some clones have enough chlorophyll in their tissues and can be grown on they own roots too, but very slow growing.
Habit: Plants at first solitary, forming large clustering mounds in time.
Stems: Globose, becoming short cylindrical with age, yellow, oblique apically. It grows 30 (or more) cm high and 7-15 cm in diameter.
Ribs: 11-15, straight, symmetrical, acute.
Areoles: White at first, later yellowish close together or almost contiguous.
Spines: 12-15 or more, bristle-like, thin, flexible, goldens yellow, 8-20 mm long.
Flowers: Borne several at a time apically, funnel-shaped, sulphur yellow, 4,5-5,5 cm long and in diameter; pericarpels with dense white wool and brownish bristles.
Blooming season: Flowering occurs in summer through early fall and will bloom several times during warm weather.
Fruits: Globose, pink, to 1 cm in diameter.
Seeds: Obovoid to club shaped, reddish brown, spiny tuberculate. 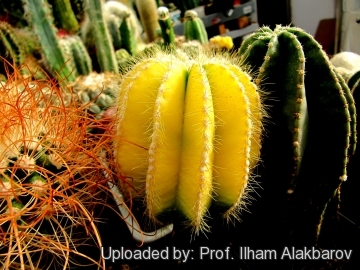