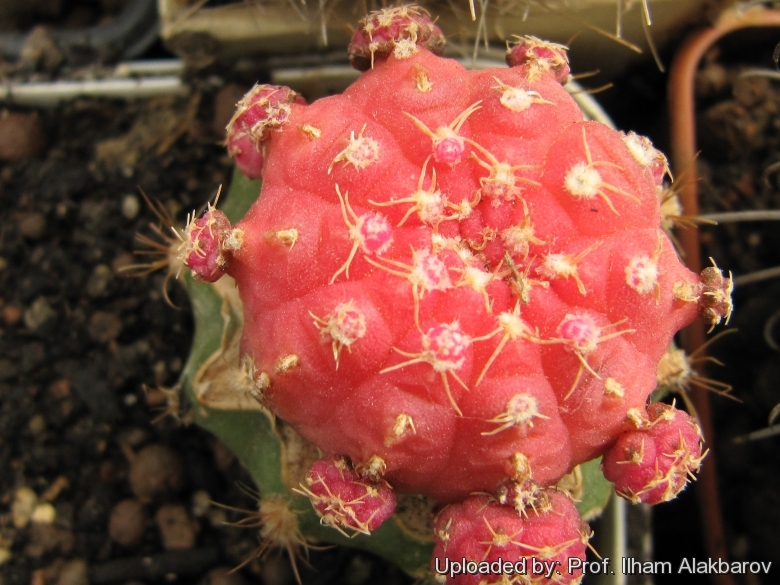 Description: Gymnocacalycium ragonesei (Sometimes wrongly spelled “ragonesi” or “ragonesii”) is a very small, dark skinned cactus resembling a round brown rock with white flowers usually in clusters from June to September.
Forma rubra (red form): The red schizochromic form (Gymnocalycium ragonesei f. rubra) has bright orange-red stems due to the absence (or reduced production) of chlorophyll pigments: every other pigment is present at normal levels, the dominant green colouration is lost, but will still more than likely have normal other pigments that give the yellow overall appearance of the stem. This form with red stems is very attractive and highly prized. This schizochromic form is almost always seen grafted on stronger columnar species, and cannot can be grown on its own roots.
Habit: It is a slowly growing succulent species, usually solitary, but sometimes cespitose.
Stem: Very flattened globose, almost disk shaped, dark red or purplish1,4-2,5 cm tall and up to 5(-7,5) cm in diameter.
Ribs: 7-10, very flat, separated by poorly delineated transverse furrows.
Spines: Short, 5-5, usually 6, thin, almost hairlike, pale creamy-white to greyish-white, with darker tips, to 3 mm long, spidery, flattened against stem (rarely sticking out - easy cactus to handle).
Flowers: 2-3 at any one time near centre of plant, funnel shaped with narrow floral tube, creamy-white with a dull red throat, up to 3-4(-5) cm long, 3-4(-4,5) cm diameter.
Blooming season: Flowers are produced in late spring and remain open for up to twelve days.
Fruits: Slender, ovoid or spindle shaped, greenish brown, to 2,5-4 cm long, grey with pale edged margins.