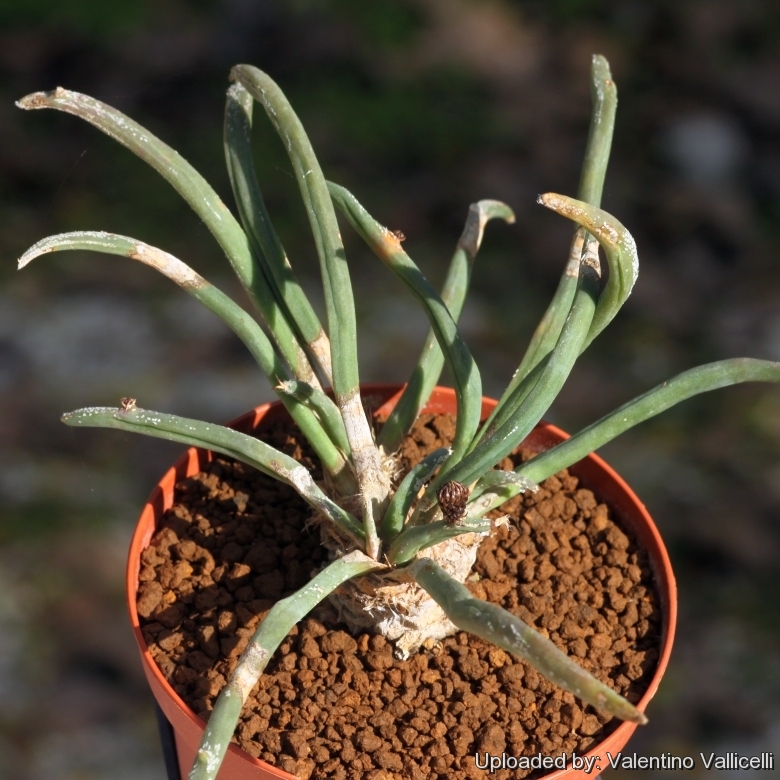 Description: Astrophytum caput-medusae f. nudum is the nude forms of Astrophytum caput-medusae distinguished by having glossy green cylindrical tubercles almost completely lacking stigmas (squamiform peltate trichomes). There are no other clear distinguishing features, and they must all be regarded as the same species.
Habit: Solitary or rarely clustered up to 19 of eight.
Stem: Very reduced, shortly cylindrical, lacking ribs, with papyraceous bristles covering the collar and the stem apex, the bristles probably originate from the basal rest of the tubercles, the colour of the bristles of tubercles is coffee whit reddish tones, the stem bristle of plants growing in habitat rarely exceed the ground level.
Tubercles: Cylindrical or occasionally triangular when young, of cartilaginous consistency, smooth, could appear similar in aspect to leaves, up to 190 mm in length and of 2 to 5 mm wide, some times the adaxial portion of the base of the tubercle is cuneate. Epidermis verrucose, glaucous-green, nude or with only few stigmas (squamiform peltate trichomes) of a greyish-white colour towards the tip of tubercles.
Areoles: Dimorphic; the spiniferous one are terminals, circular or elliptical, with white wool; the floriferous one are located in the adaxial subterminal portion, separated from the spiniferous from 18 to 46 mm elliptical, with white wool, but noticeably larger than the spiniferous areoles.
Spines: 0 up to 4, generally persisting in old tubercles, of 1 to 3 mm in length, semi-erect, rigid, the base is whitish with a dark-coffee apex.
Roots: Primary root fusiform, fleshy; secondary roots fibrous. The root is of the same dimension or slightly smaller of the aerial part.
Flowers: Originates in the subterminal portion of the developing tubercles, not in the plant apex. The flowers are diurnal, yellow, with the base of the inner perianth segments orange coloured. Outer segments greenish yellow, The receptacular tube displays papyraceous, lanceolate scales, with terminal aristae and short white hairs in the axil; Lanceolate scales with white hairs in the axil are also presents in the pericarpel.
Fruit: Green and fleshy when young, covered with lanceolate scales with wool in the axil, dry when ripe with irregular longitudinal dehiscence.
Seeds: Big, up to 3 mm in length, cap-like, testa tuberculate , black or dark coffee coloured; hilum basal and very deep, micropyle, outside the hilum, but adjacent.

Subspecies, varieties, forms and cultivars of plants belonging to the Astrophytum caput-medusae group 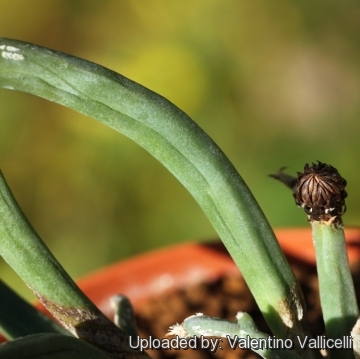 Cultivation and Propagation: - The plants grow very fast either grafted and on their own roots (possibly grafting is not required)
- Grafted plants are very sensible to drought, waterlessness for a few day conduct (especially in summer) to a complete or partial loss of tubercle that dry in a few hours, this seems due to the very small proportion of the stem, and to the fact that the big tap root (a water storage organ) is not present, in fact the plants on their own roots are more stable and resistant. Anyway the tubercles are deciduous, and easily dry and detach, but are soon replaced by new ones (a single tubercle can reach maturity in a few week)
- Young seedlings seem to need some light watering in winter, no damages or rot has been evidenced for plants watered in winter.
- They prefer a shaded or semi-shaded position as they live in habitat under shrubs.
- All the few plant under observation stopped to grow at the end of August, beginning a complete winter dormancy. The first sign of new growth appeared only on the month of march.
- The plant are quite resistant to frost (during winter the green house temperatures varied from a minimum of 0° C at night to a maximum of 25° C during sunny days) no sign of damage has been signalized.