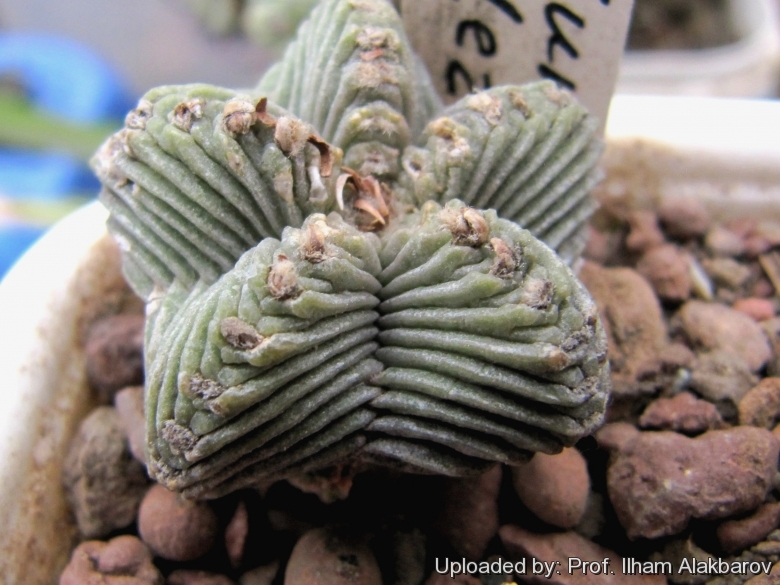 Origin and Habitat: Aztekium valdezii is endemic to a small area of about 2 square miles in the Rancho Guadelupe, Nuevo Leon, Mexico (Sierra Madre Oriental).
Habitat and ecology. This species grows in ravines similar to the habitat of
Aztekium ritteri. The vegetation consist of a mixture of shrubs and succulents present in the surrounding habitat, among which are: Cordia boissieri, Acacia rigidula, Celtis pallida, Helietta parvifolia, Gochnatia hypoleuca, Guaiacum angustifolium, Caesalpinia mexicana, Agave lechuguilla, Agave striata, Hechtia glomerata, Echinocereus penthalophus, Ferocactus hamatacanthus, Mammillaria heyderi; occuring in close proximity with A. valdezii is only Selaginella lepidophylla. Up to date only few wild specimens are alive, their environment has almost been wiped out by looter. The species is illegal to collect from the wild, the sale of the seeds or living plant is also illegal right now as the only way seeds can be collected is by harvesting in the wild which is illegal.

Description: Aztekium valdezii is a tiny e cactus species just about 2-6 cm tall in habitat, the plants are star-shaped when viewed from above simple or branched from the base. When blooming, a single nine-petal flower, white in the centre changing to bright magenta on the outside, tops off each plant. Aztekium valdezii is the third species of Aztekium in the family of cacti.
Derivation of specific name: The species name is given in honor of Biol. Mario Alberto Valdéz Marroquín who discovered the plannt in the state of Nuevo Leon in 2012.
Roots: Simple, fibrous, thickening at the boundary with the stem.
Stem: Globose, 1- 6 cm tall, up to 6 cm in diameter, greenish-grey.
Ribs: Mostly 5, margin rounded in cross section, with even and regular horizontal rib-like formations formed by the compressed tubercles from the apex to the base, without secondary inter-ribs (false ribs).
Areoles: Closely set, 1 mm across, covered with yellowish-white hairs only in young areoles.
Spines: 3(-4), abput 6-11 mm long, flattened, papyraceous, curved and twisted toward the apex of the plant, present only in the upper half of the stem.
Flowers: Apical, funnel shaped, 10-19 mm long, 15-25 mm in diameter. Pericarp naked. Outer segments, up to 7 mm in length, up to 2 mm in diameter, elliptical, with acute apex, white in the proximal parts and light or intense magenta in the distal parts. Inner segments up
to 11 mm in length, up to 4 mm in diameter, oblanceolate, with rounded apex, deep pink or magenta, and white only the proximal third. Stamens up to 4 mm long, white, anthers are yellow. Style up to 10 mm long, stigma lobes 4-5.
Blooming season: Late spring and early summer.
Fruit: Rounded, naked, after breaking up with a dehiscent pericarp, irregular with age.
Seeds: 0.37-0.69 mm long,0.42-0.69 mm thick, ovoid, opaque, dark brown.
Related species: Aztekium valdezii is very distinguishable from both Aztekium ritteri and Aztekium hintonii, in a few aspects, it separates from the first species by having only a maximum of 5 ribs, the lack of inter-ribs (false ribs) between the main ribs and the size and colour of perianth segments; while it differs from A. hintonii in the smaller body size, the maximum number of ribs (up to 10 in A. hintonii) and also the size and colour of perianth segments.

Notes: The genus Aztekium contains three species of small globular cactus. Discovered in 1929 by F. Ritter, in Rayones, Nuevo León, Mexico, this genus was thought to be monotypic (with Aztekium ritteri) until a second species (Aztekium hintonii) was discovered by George S. Hinton, in Galeana, Nuevo León in 1991. A further species, Aztekium valdesii, was discovered in 2011 by M.A. Alvarado Vázquez in the Sierra Madre Oriental mountains of Nuevo León. 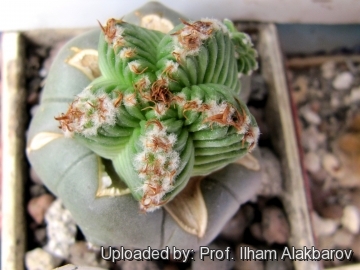 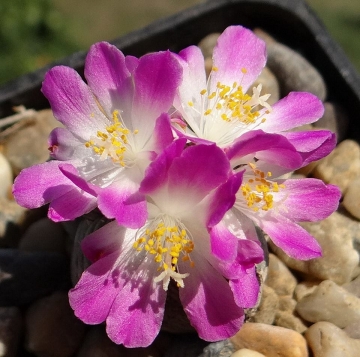