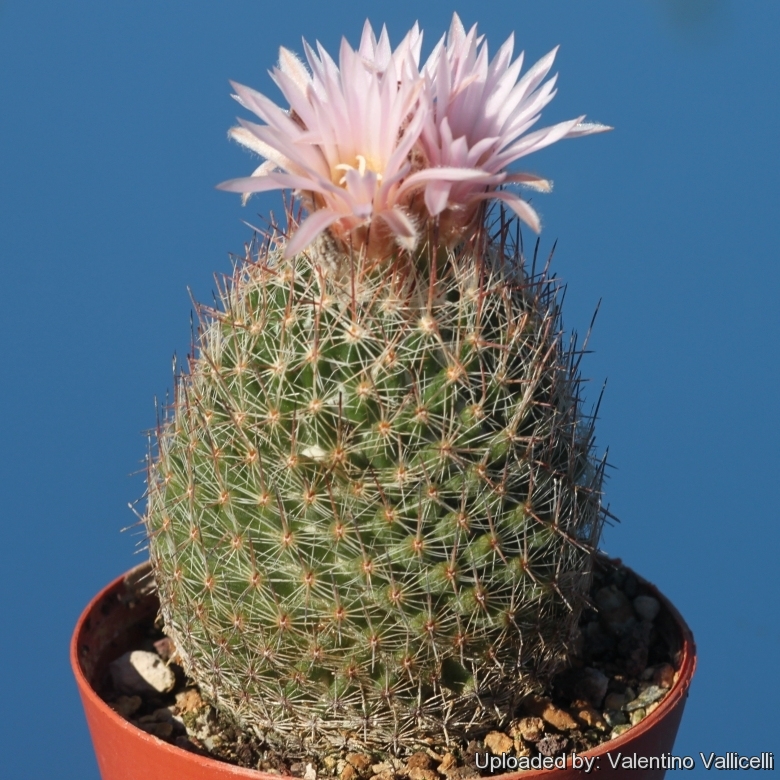 Description: Escobaria tuberculosa f. gigantea, is a controversial geographical or morphological forms of Escobaria tuberculosa that should actually be regarded as non-existent (nomen nudum). It has comparatively larger and taller stems and remain usually unbranched, while the standard species often forms clusters, however solitary and large stemmed plants are found both in the wild and in cultivation too, and the "forma gigantea" is not sufficiently differentiated and does not appear to differ from typical Escobaria tuberculosa in any significant respect and should be attributed to the standard species.
Habit: It is usually solitary and large stemmed.
Stems: Ovoid to cylindric up to 20 cm tall, up to 7 cm in diameter.
Tubercles: More or less regularly arranged in spirals, and firm, areolar glands are absent.
Spines: 21-41 per areole, ashy white, grey, or pale tan in colour, with the tips of the largest spines reddish brown or reddish black, all straight. Radial spines numerous (15-41 per areole), 4-15 mm long, grey to white, sometimes as many as 30. Central spines several, stouter than radials, brown to blackish or coloured only at tips
Flowers: The flowers are apical or nearly so, pure white, pale rose-pink, or pale lavender-pink, darker centrally, 2,5 to 4 cm in diameter.
Fruit: Oblong, bright red not very succulent; the floral remnant is strongly persistent.

Subspecies, varieties, forms and cultivars of plants belonging to the Escobaria tuberculosa group 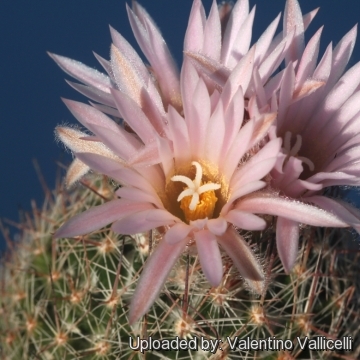 Cultivation and Propagation: Easy to cultivate in a very gritty substrate with much drainage. Water regularly in summer, but do not overwater (very rot prone), it prefer a completely dry place during winter. An unheated greenhouse would be perfect. It can survive low temperatures (appr. -12 C). Full sun to light shade.
Propagation: Seeds (no dormancy requirement, they germinate best at 25°C in spring) or usually by offsets (readily available), or occasionally grafted.