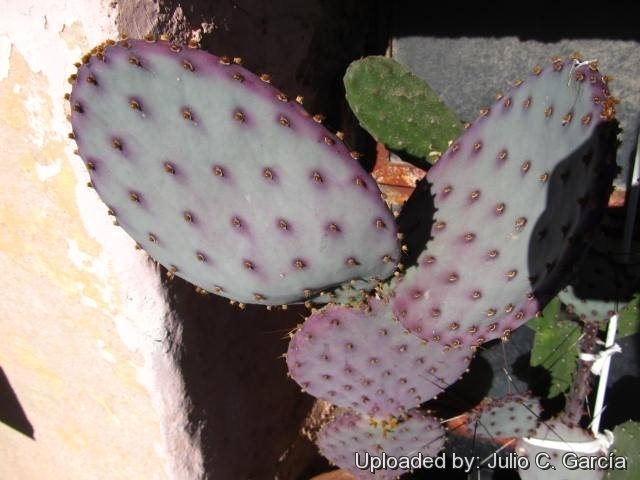 Description: Opuntia santa-rita is an erect, bushy succulent shrub to 2 m high and 3 m wide with a distinct, though short trunk. It a very attractive species with reddish or violet-purple pads. Small plants seem to be the most colourful. The yellow flowers are stunning on the purple pads in spring, definitely an eye-catcher.
Stem segments: Round, ovate or obovate sometimes broader than long, not easily detached, 5-20 cm across, thin, nearly smooth, glabrous, glaucous blue-green, when under stress with reddish or violet-purple colouring around the areoles and along the edge; this colouring is more pronounced during winter.
Areoles: 6-8(-9) per diagonal row across midstem segment, oval to round, sometimes reniform, c. 3 mm in diameter when young, but increasing with age to about 6 mm, 1.5-2.5 cm apart. The new areoles bear much wool and many short glochids up to 6 mm long. They are yellow to tannish brown in colour dense in crescent at adaxial edge of areole, nearly encircling areoles, and in subapical tuft, of even height. The growth of the wool and glochids on old stem pads sometimes produces an elongation of the areole structure outward.
Spines: Not numerous, new stem segments often being spineless or with 1 spine present on only a few edge areoles. Older segments may have 2-3 spines in the upper areoles only. Spines are needle-like, deflexed to erect, straight or slightly curved, flexible, light reddish brown to pink with the upper parts yellowish or mottled with yellow, sometimes almost all black, 2-6.2(-10) cm long.
Flowers: Yellow with bright red bases, 7.5-9(-10) cm in diameter. Inner tepals yellow throughout, fading orangish, 25-45 mm; filaments pale yellow throughout or pale yellow proximally, white distally; anthers pale yellow; style white; stigma lobes light green.
Blooming season (in habitat): April though August.
Fruits: Oval, oblong, to barrel-shaped often somewhat curved, red or purplish red, fleshy, smooth, 2.5-5 cm long, 2.5 or a little more in diameter, fleshy, glabrous, spineless, with little or no constriction below and with a pitted apex; areoles 34-44(-54). The are fruit is edible and matures in late summer to autumn.
Seeds: Tan, 3.5-5 × 3-4 mm, sides convex, often bearing bumps with narrow, acute rims.
Taxonomy: Opuntia santa-rita intergrade and is treated by same as synonyms with Opuntia macrocentra (O. macrocentra var. santa-rita), while Ferguson (1988) treats the taxon as a variety of Opuntia chlorotica. Opuntia santa-rita has purple pads like Opuntia macrocentra, but is distinguished by its more arborescent habit, spineless or few-spined pads where any spines, one per areole, more or less orangish in colour, if present, are scattered in areoles of the upper pad margin. Opuntia santa-rita has yellow flowers without red centres, while plants of O. macrocentra are shrubs that produce yellow flowers with red centres, it also has entirely different, much smaller seeds. The seeds are almost identical to those of Opuntia rufida, but the spines are not pubescent, the areoles have finer glochids and the stigma-lobes are white instead of green. In southern Arizona, O. santa-rita hybridizes with Opuntia chlorotica; that hybrid, with a chromosome number of 2n = 22, apparently accounts for L. D. Benson’s (1982) inclusion in the much more spiny Opuntia gosseliniana F. A. C. Weber found in Sonora near the Pacific. To complicate the picture, there are numerous natural hybrids between species.
Chromosome number: 2n = 22.

Cultivation and Propagation: This is a a much decorative frost hardy cactus easily found in cultivation. It is a summer grower species that offers no cultivation difficulties. Its purple pads provide a striking accent for an otherwise dormant cactus garden.
Soil: Use a very a particularly draining substratum, as it is sensitive to rottenness when in presence of humidity and low temperatures and let the soil dry out between waterings, since it's natural habitat is in sandy or gravelly, well draining soils.
Repotting: Repot in the spring, when their roots become cramped. Generally, they should be repotted every other year in order to provide fresh soil. After repotting, do not water for a week or more.
Water: In summer, during the vegetative period, it must be regularly watered, but allowing the substratum to completely dry up before irrigating again (but do not overwater ); in winter, it’s to be kept dry. Preferable not to water on overcast days, humid days or cold winter days.
Hardiness: It is a quite frost resistant cactus, hardy to -7° C (- 12° C or less if very dry). However in cultivation it is better not to expose it to temperatures lower than -0° C, even if in an aerated and protected location, in order to avoid the formation of anti-aesthetic spots on the epidermis. In presence of high atmospheric humidity avoid any frost as it is particularly sensitive to root rot. USDA Zone 6-10. It can handle extremely high temperatures in summer.
Exposure: Outside full sun or afternoon shade, inside needs bright light, and some direct sun.
Use: It is suitable for small “desert” gardens, in association with other xerophytes. Where the open air cultivation is not possible due to the climate, it is to be cultivated in pot in order to shelter it in winter.
Warning: It is armed with treacherous glochid barbs. All prickly pears have tiny, hair-like glochid thorns in clusters on the pads. The barbed glochids cause extreme discomfort and must be meticulously removed with tweezers.
Propagation: Propagation: scarified seeds, stem division. Prickly pear pads root easily and grow rapidly when placed in loose, well-draining soil.