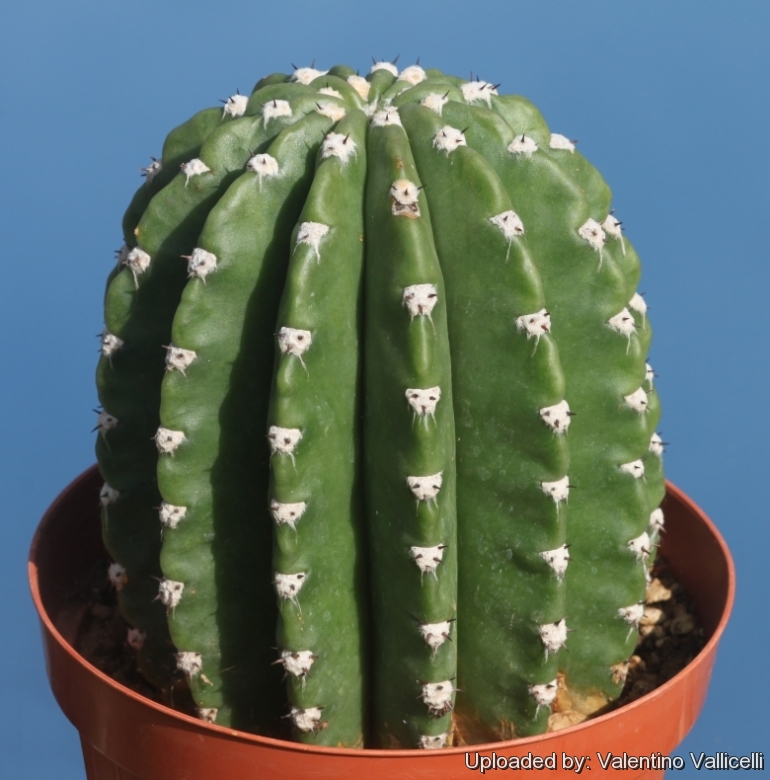 Description: 'brevispinus' warrants no varietal taxonomic ranking, as it is a recent mutant which occurred in cultivation. This plant differs from the common Echinopsis atacamensis subsp. pasacana only for the very short spines. Except for the spines it is identical in shape and size to the standard species, but the true self of this plant is controversial and some suggest that it may be a hybrid.
Stem: Columnar, cylindrical, stout, up to 30 (or more) cm across that grows very slowly several metres tall. The stem stays for a long time solitary but produces lateral branches and becomes Saguaro-like with age.
Ribs: 20-30 deep.
Areoles: Round that produce at once a whole spine cluster, but the areoles remain capable of further growth. Many years later new spines may be formed from the upper part of the areoles.
Spines: Only 5 becoming more numerous as the plant ages, very short, hardly emerging from the areoles felt, rigid, dark-brown coloured, the longest up to 5 mm long, but usually less.
Flowers: Not known.
Fruit: Not known. 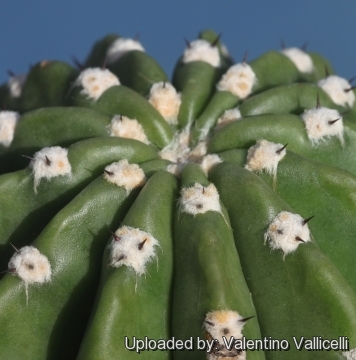 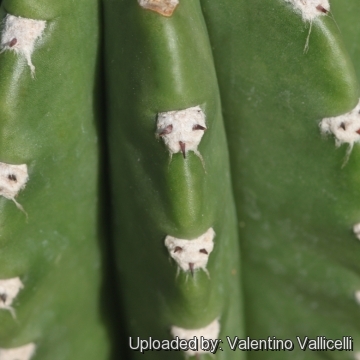 Cultivation and Propagation: It grow slowly and are moderately cold hardy, but make sure that they are not exposed to severe freezing temperatures, or they may die. They need a well drained soil mix. Water regularly in summer but allow to dry fully before watering again. During the winter months they should be rather kept dry. Since they are big-sized plants, they need plenty of space for their roots. Repotting should be done every other year, or when the plant has outgrown its pot.
Exposure: Light shade when young, full sun later.
Propagation: This plant, like other clonal cultivars, may be only propagated vegetatively from stem cuttings in spring (let them dry till the ends callous well. Then replant them in fresh cactus soil that is ever so slightly moist, and keep it that way till they root) or by grafting. It do not branches spontaneously if not very old and tall, so a few branches may be obtained cutting the top a larger plant ( the cutting is rooted as exposed above) and the base slowly produces a very limited number of adventitious shoots. This make it very rare and expensive.