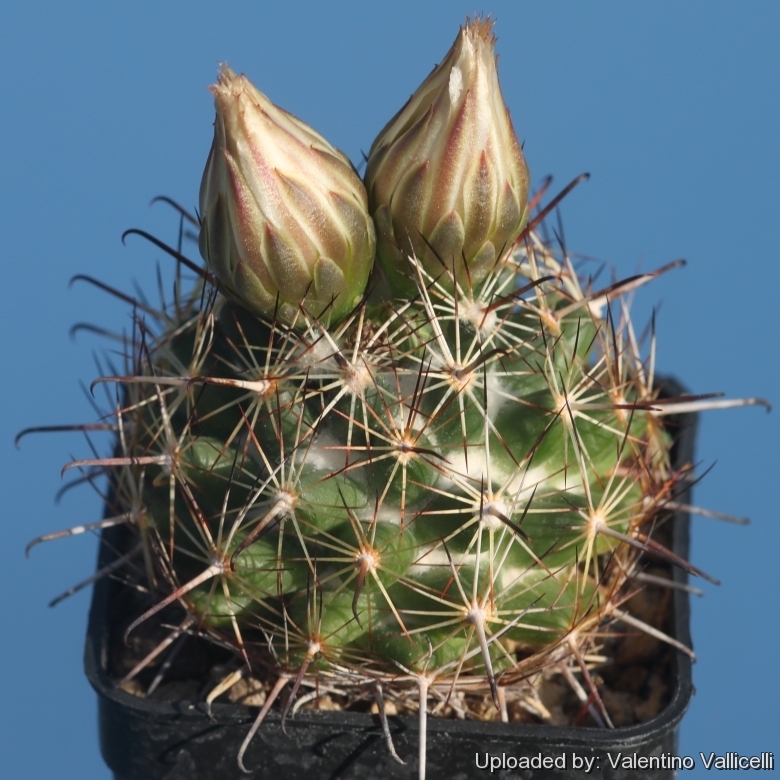 Description: Coryphantha hintoniorum f. alpina is a small solitary globose cactus with one stout hooked central spines in each areole, it is one of the many geographical forms of Coryphantha hintoniorum and shows more or less no difference between the latter.
Coryphantha hintoniorum is solitary at first, but clumping as it matures by stolons from the lower areoles. It is related to Coryphantha sulcata.
Stem: Spherical to short cylindrical, green, 9-15 cm tall 9-15 cm, 5-9 cm in diameter.
Tubercles In 13-21 series, conical cylindrical, nearly round in cross section, up to 22 mm long, with a complete grow without glands.
Axil: With white wool when young.
Areoles: Round woolly when young later almost naked.
Roots: fibrous (no tap root)
Central spines: 1, hooked or not, greyish, 14-18 mm long, base of the spine thickened. This species is one of those Coryphanthas which pass a purely radial-spined youth stage, but almost all of the plants after several years develop the central spines, giving the plant its sea urchin appearance.
Radial spines: 11-12 radials, greyish white or horn coloured, often with black tips, 10-18 mm long of which about 6 horizontally radiating, while a second layer of erect radial spines spines in the upper part of the areoles is produced only on mature plants with central spines.
Flowers: Whitish or golden with no redness in the throat, up to 4.5 cm long and 4 cm broad. Outer perianth segments with darker brownish midribs. Filaments greenish-white; anthers yellow; stigma green-white with about 10 yellow lobes.
Fruits: Acid green, juicy, up to 27 mm long, with persisting flower remnants.
Seeds: Kidney-shaped red brown.

Subspecies, varieties, forms and cultivars of plants belonging to the Coryphantha hintoniorum group 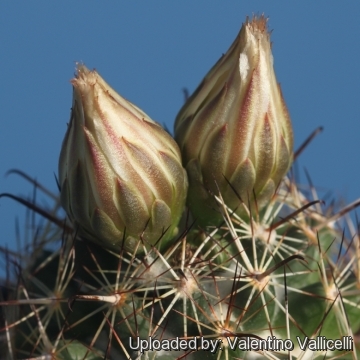 Cultivation and Propagation: In culture it is without problems, and regularly shows its large yellow flowers. It does best in slight shade, but does well in full sun too. It is sensitive to overwatering (rot prone), and needs a very porous soil with good drainage. It flowers quite early, but needs about 8-12 years to reach the typical, definite outlook. It tolerates fairly low temperatures as long as it is kept dry (hardy to -5° C or less for short periods of time).
Propagation: Propagation is by seed.