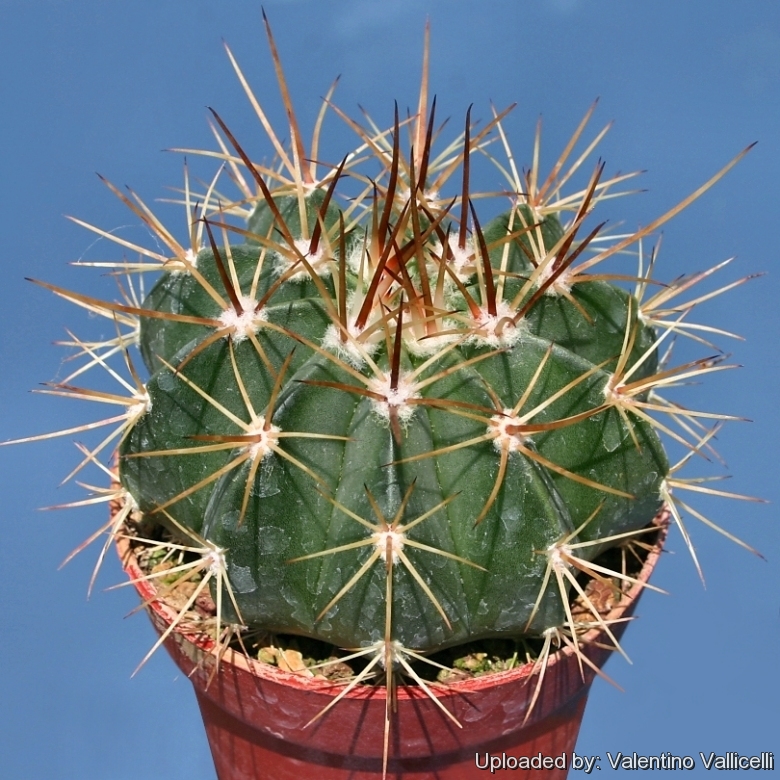 Description: Melocactus grisoleoviridis distinguishes from the standard Melocactus bahiensis subs. amethystinus for its larger green till silver body. It has also a taller cephalium with wool and brown bristles. It remembers a crowned head. Plants of this genus attract more attention in collections than those of any other cactus genera.
Stem: Depressed-spherical, globose or pyramidal, light to dark green 10-21 cm tall, 11-21 cm in diameter in diameter.
Ribs: 10-12 acute and variable in shape.
Areoles: White 10-24 mm apart.
Cephalium: Mostly small with many brown bristles up to 5 cm high and 6,5-8,5 cm in diameter.
Spines: Short, curved, off-white, except in the centre where the new ones are yellow, reddish brown, dark brown to black often bent or even hooked in juvenile specimens.
Central spines: 1-4 per areola, 10-53 mm long mostly straight-projecting:
Radial spines: 7-12 mostly straight. 13-50 mm long, the lowermost only a little longer than the others.
Flowers: 18-23 mm long, 10-12 mm wide.
Fruit: Berry, club-shaped up to 25 mm long, 9 mm in diameter, red to crimson on the top, white or pale pink at the base.
Seeds: 1-1,35 x 1 mm somewhat tuberculate.

Subspecies, varieties, forms and cultivars of plants belonging to the Melocactus bahiensis group