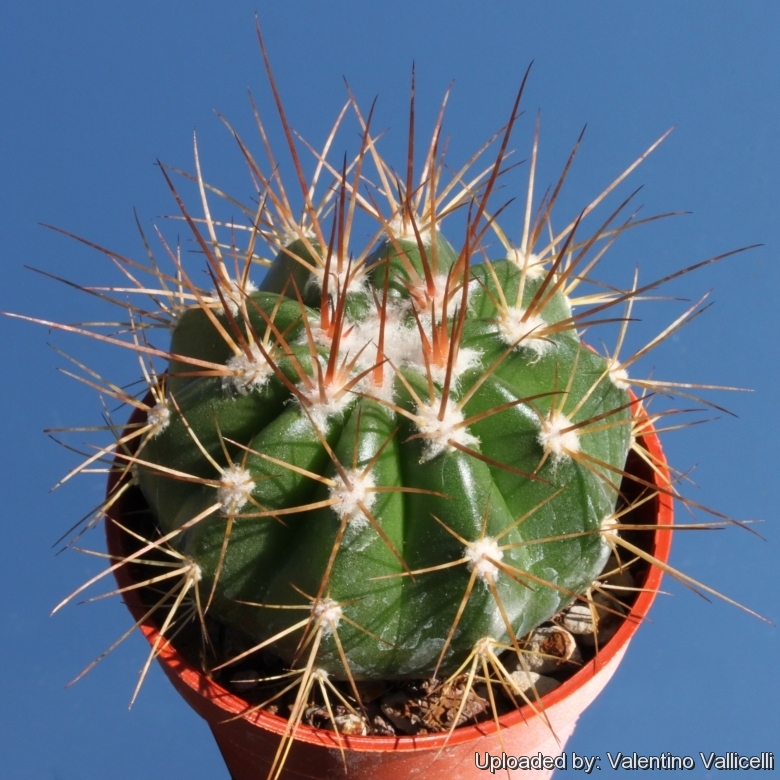 Description: Melocactus florschuetzianus (now considered a synonym of Melocactus ernestii subsp. longicarpus) distinguishes for its yellowish green stem with long thin yellowish-brown spines.
Habit: It is a solitary perennial stem succulent with determinate growth in which the axis does not continue to elongate indefinitely being limited by the development of the flower bearing cephalium.
Stem: Spherical to depressed conical to ellipsoid to short cylindrical, distinctly mucilaginous, light yellowish green to dark green, (8-)9-25(-45) cm high, (7-)12-22(-25) cm in diameter. When the plant has reached a certain age it shows at the growing tip a cephalium (the structure, where the flower buds will form.
Ribs: 9-13, more or less rounded but sometimes sharp-edged.
Cephalium: Cap-like, globose to shortly cylindrical, covered by tightly packed areoles that bear wool and pinkish-red bristles.
Areoles: Somewhat rounded to obtuses.
Spines: Very long, fine yellowish to brownish, becoming grey or black with age on old mature specimens.
Flowers: Small, light to dark pinkish magenta. They do not emerge fully from the cephalium.
Blooming season: The flowers arise annually in mid summer from the cephalium in a ring. The flowers are diurnal and opens for a few hours at about lunchtime.
Fruits: Clavate berry, variable in size 1,5 to 4,5 cm long, deep pink to crimson-red. Ripened fruits are present apically on the cephalium.