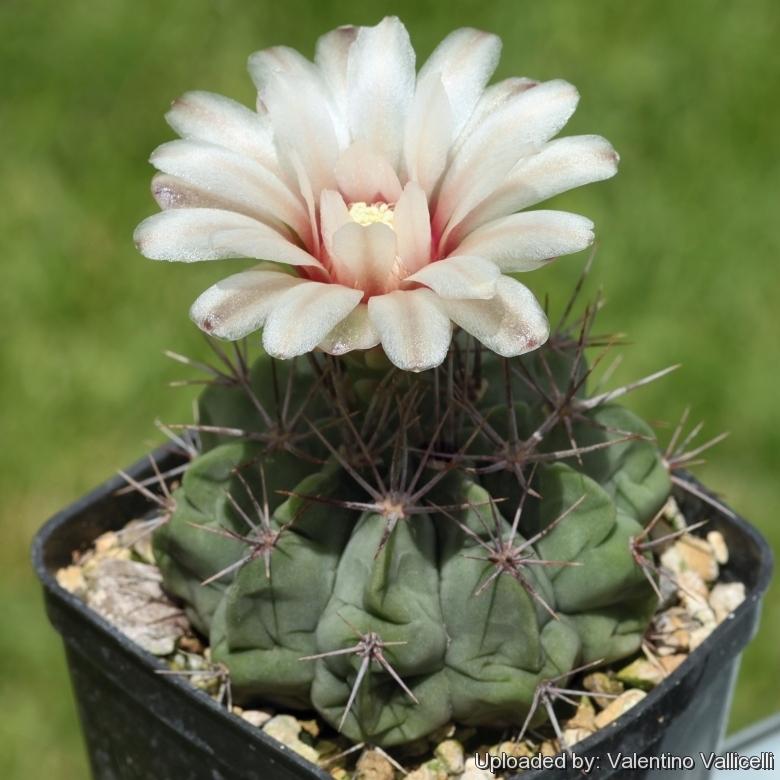 Origin and Habitat: Sierra Ischilin, Argentine province of Córdoba. This species is known only from the Sierra Ischilin range and a few adjacent areas and can be considered a microendemic species.
Altitude: (150-)900-1150
Habitat: It occours on rocky soils, filled up with weathered material and gravel often in association with Gymnocalycium parvulum ssp. agnesiae among grasses and under bushes. The plants are sometimes almost covered by Selaginella.

Description: Gymnocalycium mostii var. genseri is a small single headed, flattened cactus, very similar to Gymnocalycium mostii subs. valnicekianum. It distinguishes for the peculiar glaucous green body (usually dark green in G. valnicekianum) and for the thinner spines, all the other characteristics are identical, namely size and form of ribs, number of spines, colour of flowers etc.
Habit: It has been described as solitary, but in cultivation it can also form groups with age.
Stem: Usually globular up to 30 cm tall and 18 cm across, pale glaucous green.
Roots: Fibrous.
Ribs: About 9-12 which consist of flattened protuberances, each of which finishes with a large elliptical, densely furred areola length 12 mm.
Radial spines: 9-15(-20) up to 4 cm long; Varying from brownish to grey, but those near the apex are mostly reddish-brown.
Central spines: 4-6(-11) resembling the radial ones.
Flowers: White with a reddish throat. The diameter and length are identical and are equal to 5 cm. Seedlings bloom at the age of 5-7 years.

Subspecies, varieties, forms and cultivars of plants belonging to the Gymnocalycium mostii group 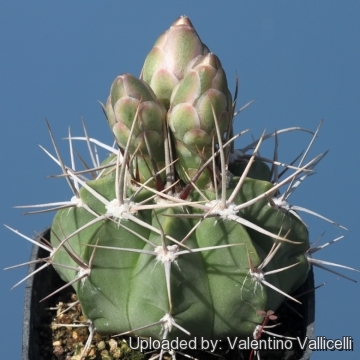 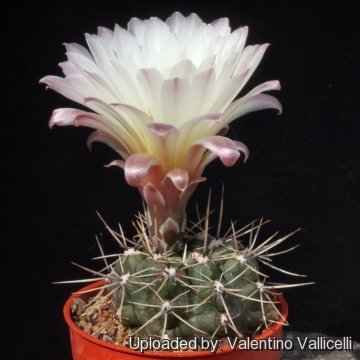 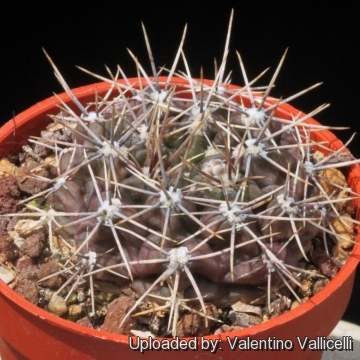 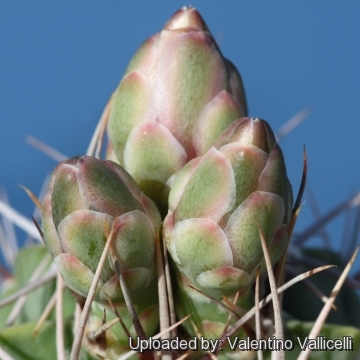 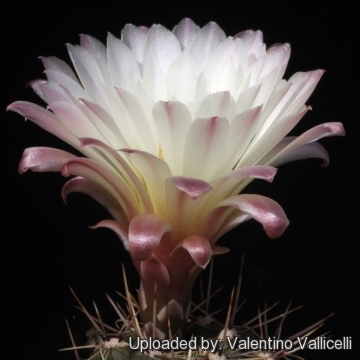 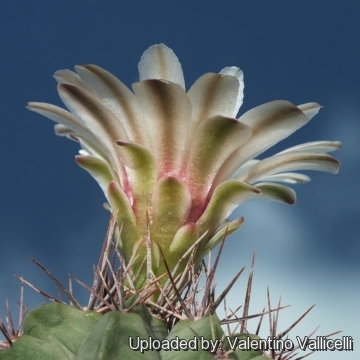 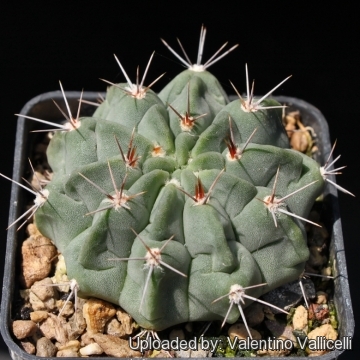 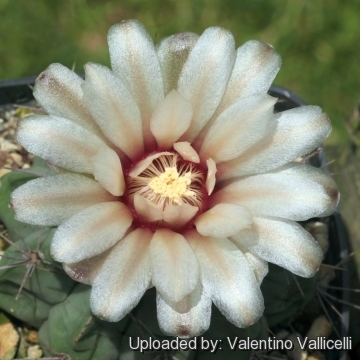 Cultivation and Propagation: Gymnocalycium genseri is a summer grower species that is easy to cultivate.
Growth rate: It is a slow growing and easily flowering species.
Soils: It likes very porous standard cactus mix soil. Prefer a low pH compost, avoid substrata rich in limestone; otherwise growth will stop altogether.
Repotting: This plant needs plenty of space for its roots, repotting should be done every other year or when the it has outgrown its pot. Use pot with good drainage.
Watering: Needs moderate to copious waterings in summer, but do not overwater (Rot prone), keep dry in winter at a minimum temperature of 0°C.
Fertilization: Feed with a high potassium fertilizer in summer.
Hardiness: Reputedly resistant to frost if kept on the dry side prior to, and during, cold weather (hardy to -12 C ° C, or less for short periods), but for safe cultivation it is best to avoid freezing temperatures.
Exposition: The plant tolerates extremely bright situations but enjoys filtered sunlight or afternoon shade, inside it needs bright light, and some direct sun. Tends to bronze in strong light, which encourages flowering and heavy spine production, but is likely to suffer from sun scorch or stunted growth if over exposed to direct sunlight during the hottest part of the day in summer.
Uses: It is an excellent plant for container growing. It always looks good and stays small. It look fine in a cold greenhouse and frame or outdoor in a rockery.
Pests & diseases: It may be attractive to a variety of insects, but plants in good condition should be nearly pest-free, particularly if they are grown in a mineral potting-mix, with good exposure and ventilation. Nonetheless, there are several pests to watch for:
- Red spiders: Red spiders may be effectively rubbed up by watering the plants from above.
- Mealy bugs: Mealy bugs occasionally develop aerial into the new growth among the wool with disfiguring results, but the worst types develop underground on the roots and are invisible except by their effects.
- Scales: Scales are rarely a problem.
- Rot: This species is particularly easy and accommodating, seldom suffer of cryptogamic diseases. Rot it is only a minor problem with gymnocalyciums if the plants are watered and “aired” correctly. If they are not, fungicides won't help all that much.
Propagation: Direct sow after last frost. Seeds germinate in 7-14 days at 21-27° C in spring, remove gradually the glass cover as soon the plants will be well rooted (ca 1-2 weeks) and keep ventilated, no full sun for young plants!