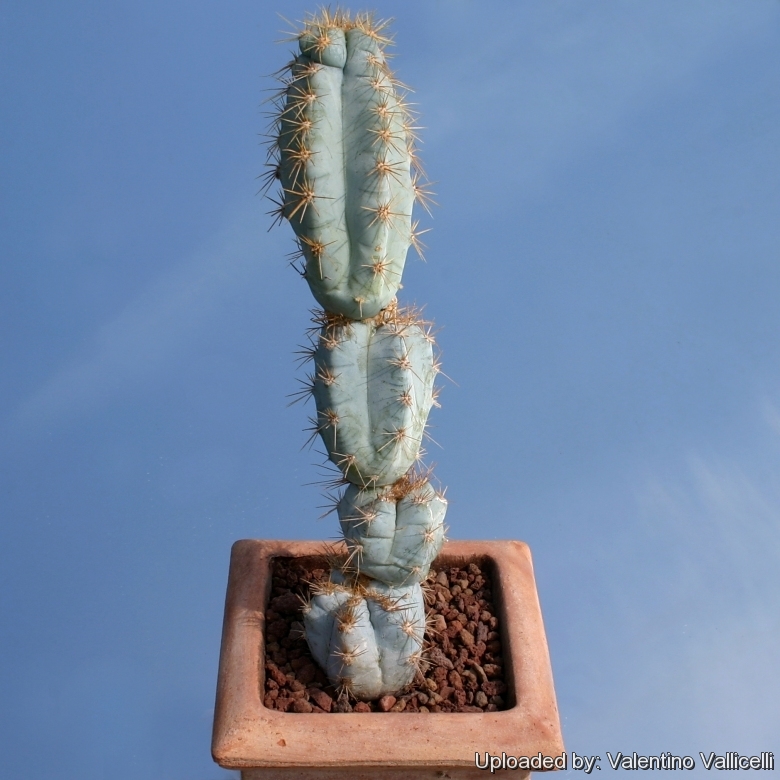 Description: Browningia sp. (Azureocereus) f. monstruosa is a monstrous highly branching cactus with constricted stem formed by short joints (somewhat like an Opuntia do). This form reproduces vegetatively and it is possible to find clones with different degrees of monstrosity or deformity. It is similar in colour to Browningia hertlingiana also known as the “Blue Cereus” and the the juvenile specimens have a beautiful blue frosty covering. It one of the few really blue cacti.
Habit: It is shrub-like, stem succulent, with branched segmented stems that, under favourable conditions, can reach the ultimate height of 1 m.
Stem: Erect 4-8 cm in diameter, the new growth is a fantastic vivid turquoise blue while old growth turns a pale olive green. The typical blue covering only develops in a warm climate and with much light.
Ribs: 5-7 slightly tuberculate on new growth.
Areoles: Somewhat sunken on tubercles tips.
Spines: 8-15 unequal poorly differentiated (of which centrals 1-3, radials 5-11), the longest to 2 cm long, all yellow or yellowish grey.
Flower: Not seen. 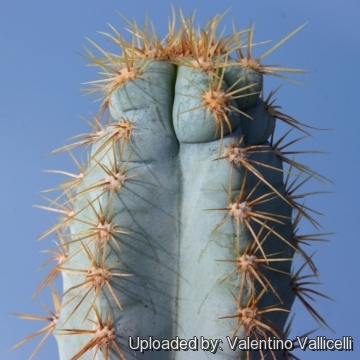 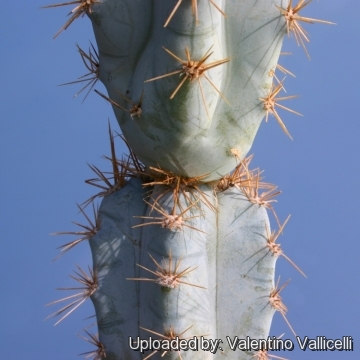 Cultivation and Propagation: Browningia sp. (Azureocereus) f. monstruosa is an easy plant that remains small and form beautiful specimens with time. It is sometime seen as a grafted plant but grows on its own roots too.
Soil: Furnish good drainage and use an open and free draining mineral compost that allows therefore roots to breath.
Hardiness: Frost Tolerant as low as -2°C (or possibly colder) but in cultivation it is best to avoid any frost when during the winter the temperature can go down to 2° C without any harm so long as the compost is very dry. During the summer it is best to keep the plants outside where the temperature can rise to over 30 C with no harm to the plant.
Watering: It likes only a short winter's rest and should be kept almost completely dry during the winter months, if the soil is allowed to be dry for too long root loss could follow but equally the same result would occur if the plants are both wet and cold. From March onwards the plant will begin to grow and watering should be increased gradually until late May when the plant should be in full growth.
Water regularly during the summer so long as the plant pot is allowed to drain and not sit in a tray of water. During hot weather you may need to water the plants more frequently so long as the plant is actively growing. From late September watering should be reduced to force the plant to go in to a state of semi dormancy, by October you should be back in to the winter watering regime.
Exposure: Need full sun, if kept too dark it may become overly lush and greener and could be prone to rotting due to over watering.
Fertilization: Feeding may not be necessary at all if the compost is fresh then, feed in summer only if the plant hasn't been repotted recently. Do not feed the plants from September onwards as this can cause lush growth which can be fatal during the darker cold months.
Propagation: Grafting or cuttings. Plants are usually grafted onto column-shaped cacti but proved to be able to produce their own roots if degrafted. Cuttings will take root in a minimum temperature of 20° C (but better in hot weather). Cuttings of healthy shoots can be taken in the spring and summer. Cut the stem with a sharp, sterile knife, leave the cutting in a warm, dry place for a week or weeks (depending on how thick the cutting is) until a callus forms over the wound. Once the callus forms, the cutting may be inserted in a container filled with firmed cactus potting mix topped with a surface layer of coarse grit. They should be placed in the coarse grit only; this prevents the cut end from becoming too wet and allows the roots to penetrate the rich compost underneath. The cuttings should root in 2 to 6 weeks.