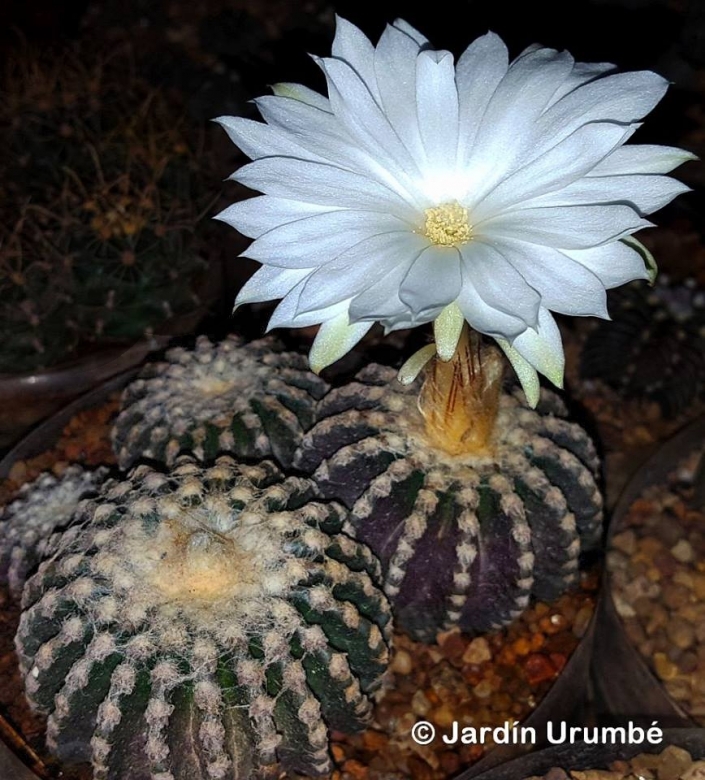 Origin and Habitat: North-west of Grao Mogol in the Serra do Barão in northern Minas Gerais, Brazil (extent of occurrence is less than 100km2 and its area of occupancy is around 6km2, and it is known from three locations).
Altitude: It grows at altitudes between 800 and 1200 metres above sea level.
Habitat and Ecology: This southeastern campo rupestre (Grão Mogol) element grows in quartz gravel and sand beneath shrubs in campo rupestre. It declined substantially in the past due to collection for the international horticulture trade as well as quartz extraction, but populations are stable at the moment, as the entire population is under strict protection and included in the Parque Nacional de Grão Mogol.

Description: It is a small solitary cactus with a radially segmented body showing the typical habitus of this flat, globular genus. The cephalium, which stays just as flat, is covered by the flowers that come out of it. These cacti are not easy to cultivate, but when grown to maturity, however, they possess an exotic look shared by no other cacti, and they’ll generally attract a lot of attention. D. horstii is really distinctive and obviously deserving of specific rank.
Stem: About 5-6 cm in diameter (up to 8 in culture) The plant with cephalium only grows to be 2-3(-5) cm tall; The colour of the epidermis is at first green and later dark red/brown to almost black.
Ribs: 12 to 22 prominent, narrow, straight, of even width not thikened at the areoles and not tuberculate, with 12 to 14 areoles per rib on plants with cephalium.
Radial spines: 8 to 10 inconspicuous, light coloured recurved backwards in a comb like arrangement, 2-4(-7) mm long.
Flowers: The deliciously fragrant nocturnal blooms are 7.5 cm long, 6 cm inches in diameter. They come in profusion in summer, out of a cephalium covered by whitish to light brown wool and bristles. Fruit is white.
Remarks: Discocactus horstii takes up fog-water through its thorns and also it has a peculiar epidermal surface that may be capable of permitting water to enter the stem.

Subspecies, varieties, forms and cultivars of plants belonging to the Discocactus horstii group 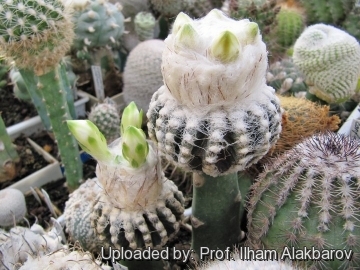 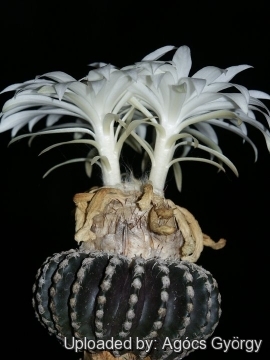 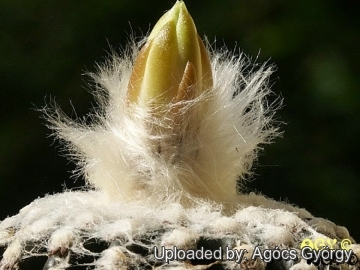 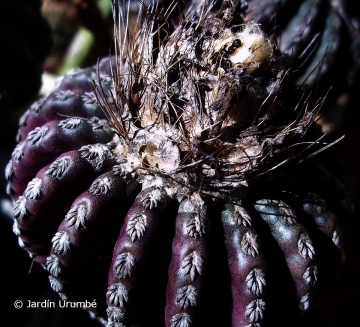 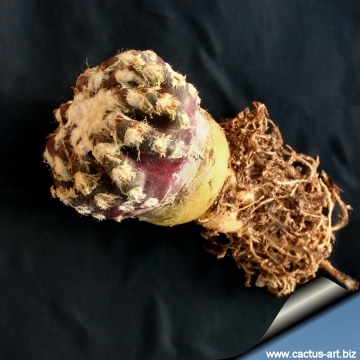 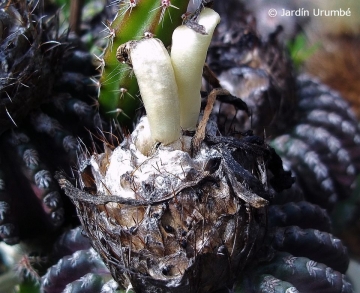 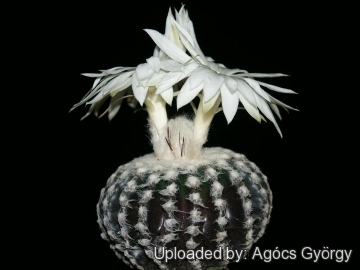 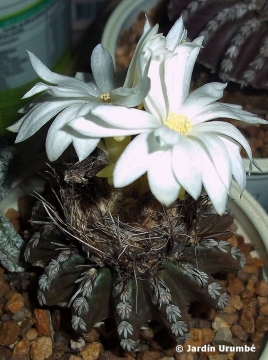 Cultivation and Propagation: It is rather difficult to grow and frost tender, should be kept at above 15° C if grown on its own roots (8°C if grafted) need full sun or afternoon shade. Young seedlings are generally grafted because they are slow growing and very rot prone when kept on their own roots and though they can’t endure long stretches of total dryness, too much water will rot them, as their weak root systems tend to be inefficient at sucking up water from wet soil. They generally resent being repotted and can take a long time to establish.
Propagation: Seed or grafting.

by Prof. Ilham Alakbarov
There are a total of 20 Photos.
Click here to view them all!
Cite this page: "Discocactus horstii" Text available under a CC-BY-SA Creative Commons Attribution License. www.llifle.com 14 Nov. 2005. 04 Dec 2022. </Encyclopedia/CACTI/Family/Cactaceae/21884/Discocactus_horstii>