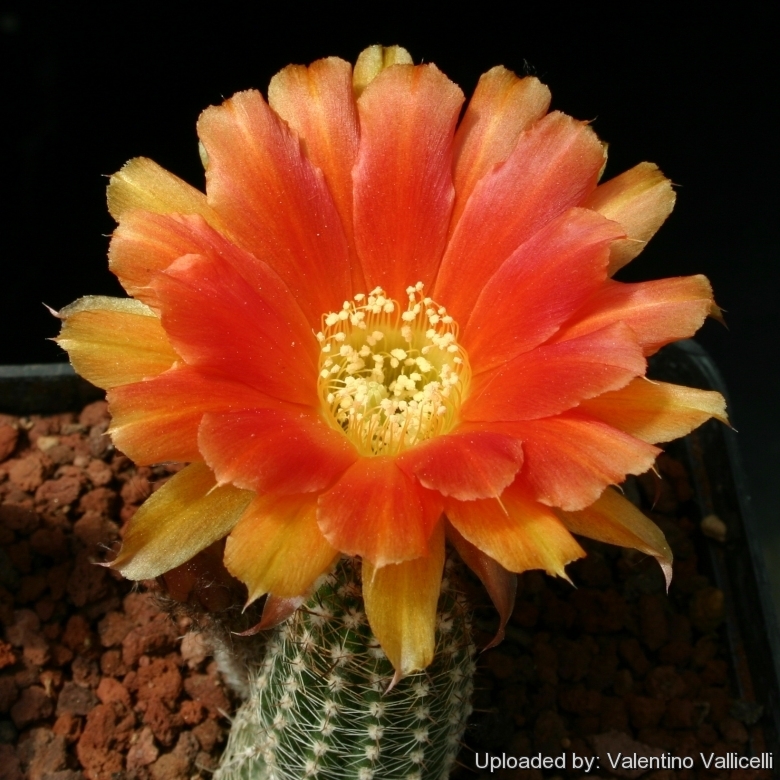 Description: This is one of the best and showy Chamaelobivia cultivars, obtained by cacti enthusiast and hybridiser Johnson. This is not a prolific clumper as usually are the Chamaelobivia Hybrids and also it is quite slow to grow.
Flowers: Blooms are dark orange up to 7 cm tall.
Tepals: The central petals are bright orange, while the outer progressively fade to a clearer orange-Yellow ..
Throat: Yellow. Throat-circle light yellow.
Stamens: With bright yellow filaments and whitish/cream anthers.
Stigma: Pale green. 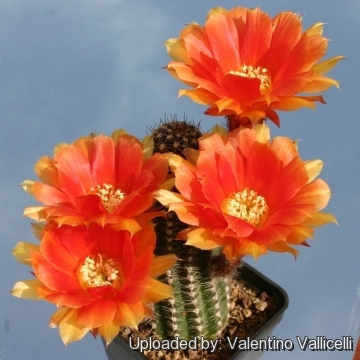 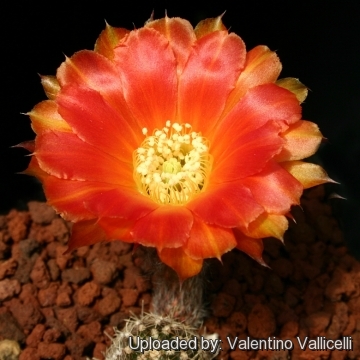 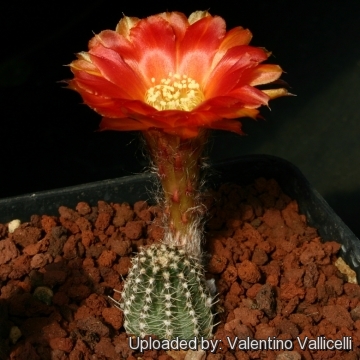 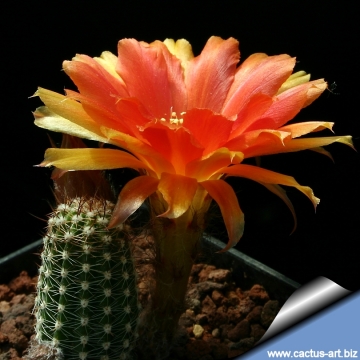 Cultivation and Propagation: These plants are summer growers that offer no cultivation difficulties. Grow them in rich, airy, porous, growing medium which mainly consists of non organic material such us clay, pumice, lava grit, and only a little peat or leaf-mould. If potted, repot preferably in the spring, if their roots become cramped. Generally, they should be repotted every other year in order to provide fresh soil. However, this doesn't necessarily mean they'll need larger containers. Fill about a quarter of the pot with broken crocks, gravel, etc. to promote good drainage. After repotting, do not water for a week or more. Water regularly in summer (but do not overwater), and let their soil dry out between waterings, keep rather dry in winter. No water should ever be allowed to stand around the roots. Feed with a high potassium fertilizer in summer.
Exposure: Outside they need a bright exposure, full sun or half shade in summer if the location is exceedingly hot or bright, inside needs bright light, and some direct sun. It can tolerate moderate shade, and a plant that has been growing in shade should be slowly hardened off before placing it in full sun as the plant will be severely scorched if moved too suddenly from shade into sun.
Frost Tolerance: Light frost protection required for safe cultivation, but many of the hybrids very frost resistant if kept dry (The hardiness varies from -5°C to -12° C depending on clone). This plants need a period of cool rest in winter to produce flowers abundantly. They flower freely indoors if conditions suit them.
Watch for infestations of mealybug, scale insects and spider mite.
Propagation: Easy to propagate from cuttings. The cuttings will take root in a minimum temperature of 20° C. Cuttings of healthy shoots can be taken in the spring and summer, Cut them with a sharp, sterile knife, leave the cutting in a warm, dry place for a week or weeks (depending on how thick the cutting is) until a callus forms over the wound. Once the callus forms, the cutting may be inserted in a container filled with firmed cactus potting mix topped with a surface layer of coarse grit. They should be placed in the coarse grit only; this prevents the cut end from becoming too wet and allows the roots to penetrate the rich compost underneath. The cuttings should root in 2 to 6 weeks.
How to Grow new hybrid from seeds: The reproduction by seed is also possible but the offspring will not be identical to the mother plant. The Chamaecereus-Lobivia will produce several fruit with hundreds of seeds each season. After the flower dies off and the pods are ripen it is possible to collect them from under the dried flower. Then place the seeds in some water to soak overnight. Fill germination trays with a well blended mixture of 60% peat moss 40% vermiculite and one to one part of coarse sand or pumice. Use a horse syringe to suck the small seeds and some of the water into the syringe. With the syringe, distribute the seeds evenly in the germination tray, shaking the syringe so the seeds don't settle at the bottom and all come out at once. Place then the trays in filtered sun, cover with a glass sheet and keep the soil moist until the seeds germinate in approximately 2 to 6 weeks. They will look like small green spheres, somehow red in bright light. Then gradually remove the glass cover. When the small cacti start to sprout tiny spines, use a pair of tweezers to transfer them from the propagation trays into 5 cm pots filled with the same soil mix used in the germination trays. Allow the small cacti to grow for about one/two year and then move the cacti to 10 cm pots and allow them to grow further.