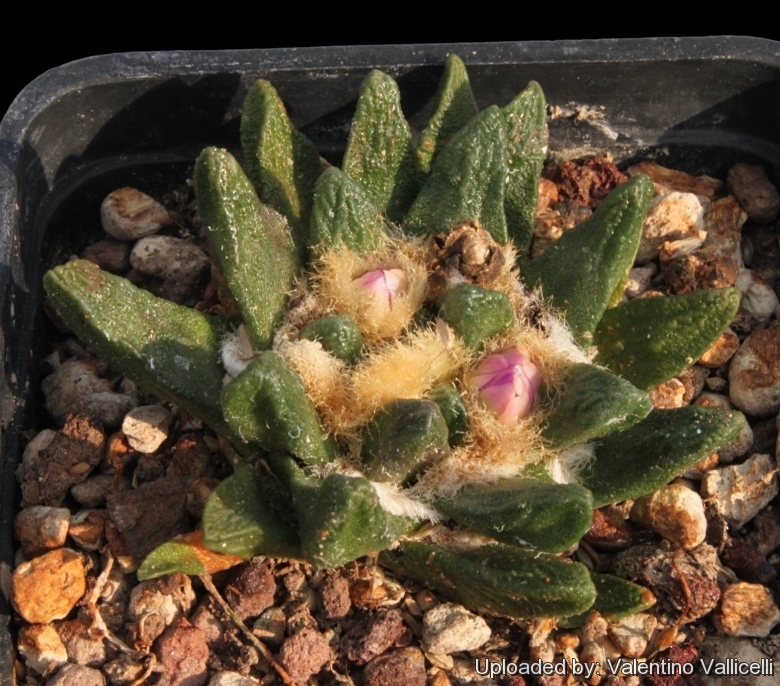 Description: Ariocarpus scaphirostris var. swobodae is a geographical forms of Ariocarpus scaphirostris which differs from the standard species only for its very soft tubercles, but is likely to fall within the natural variation of the species.
Habit: It is a small and slow-growing, geophytic cactus rising barely above ground level.
Stem: Smaller solitary, subglobose or globose, more or less rounded on top, 3-6 cm in diameter and 2-6 cm tall (occasionally bigger in cultivated plants).
Tubercles: Few divergent, erect spineless, not crowded or basally compressed, bluntly pointed at the apexes, very soft, flattened and smooth adaxially, fissured, slightly incurved, 1,5-4 cm long, 5-8 mm broad, at least twice as long as wide, grey wool between the tubercles.
Roots: Thick underground carrot-like root.
Flowers: Diurnal, self-fertile, bright dark purple, up to 4 cm.
Blooming season: Flowers in the Autumn, it flowers and fruits profusely.
Fruit: Greenish, 9-15 mm long 4-8 mm in diameter.

Subspecies, varieties, forms and cultivars of plants belonging to the Ariocarpus scapharostris group 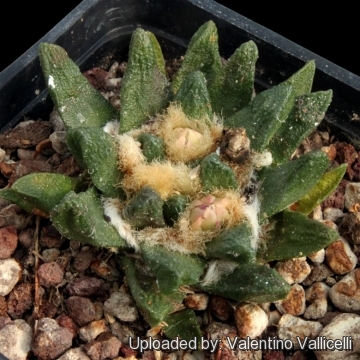 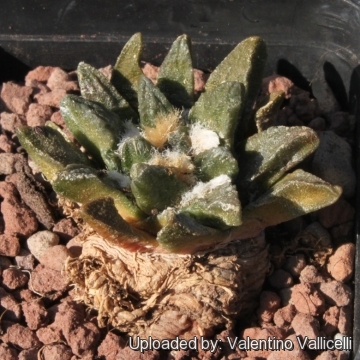 Cultivation and Propagation: Ariocarpus scaphirostrus var. swobodae is not too difficult in a greenhouse, although it grows extremely slowly (it starts blooming at the age of 8-12 years).
Soil: Use a loose mineral cactus mix with extra perlite or pumice and clay pots help the plants to dry out between watering.
Repotting: The plants need deep pots to accommodate the napiform unit formed by the stem base and the rootstock. Generally, they should be repotted frequently at least every other year in order to provide fresh soil. However, old plants become senile and have a tendency to succumb to disease and a weak root system. At this stage, as is well known, they die suddenly. So, after they reach 6 cm in diameter grow them slowly, and adopt a new repotting period, using intervals of every 3 years. Additionally grow them under drier conditions or with stronger sunlight. However, repotting doesn't necessarily mean they'll need larger containers.
Sun Exposure: Partial sun or light shade. They need a good amount of light, a place near the roof of the greenhouse helps drying the pot after watering.
Watering: They require moderately watering through the growing season. This can be done weekly during the summertime, if the weather is sunny enough, with a little fertilizer added. Kept this way, plants will show a healthy, although slow growth. Keep dry as soon as the temperature starts dropping in October and keep it perfectly dry in winter at temperatures from 5 to 15 degrees centigrade.
Hardiness: Winter care presents no problems at 5°C with plenty of light., but frost hardy to -10°C.
Pest and diseases: They are generally fairly easy to grow, especially if kept pest-free. They are susceptible to stem and root mealy bugs, and damage from these may well initiate fungal attack.
Propagation: By seeds, remembering that seedlings dislike strong light and dry conditions, but the grafted plants are typically rather tall- growing, compared with plants on their own roots, that are usually flatter to the ground.