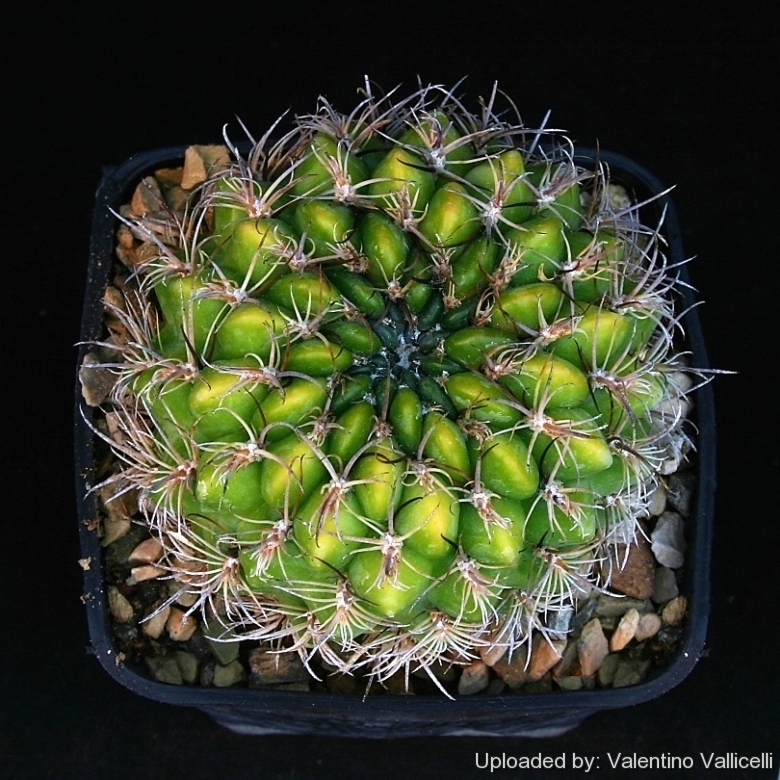 Description: The classical Echinopsis tiegeliana (Lobivia tiegeliana) is a small cactus with a much flattened usually solitary body, whose spines looks pectinate ( i.e., its spines are arranged like a comb). The variegated form (Echinopsis tiegeliana f. variegata) has sectors, patches or stripes with distinct shades of yellow. A very few variegated plants sprout unpredictably time by time among normal green seedling and are very rare. Plants with variegated stems are often attractive and highly prized.
Roots: Large fleshy tap root.
Stems: Glossy green and yellow, often purplish with strong light and in cold weather, depressed or spherical up to 15 cm in diameter, but usually about 6 cm broad. The crown is sunken.
Ribs: 17-20, acute, spirally arranged with raised tubercles between which the areoles appear.
Areoles: White, to 1,5 cm apart.
Spines: Arranged like little spiders, awl shaped, pectinated, variable, reddish, black, brownish, honey or horn coloured , often darker at the tip, turning greyish eventually.
Central spines: As many as 3, pointing downward, to 5 cm long.
Radial spines: 8 to10, 4-6 cm long.
Flowers: Lateral 2,5-3 cm long and 4,2 cm in diameter, deep red to violet-pink, although there are varieties with yellow flowers as well.
Blooming season: Mature plants produce several waves of blooms over the season. The flowers open during the day. It blooms abundantly since an early age.
Fruits: Globose to ovoid, semidry, dehiscent.