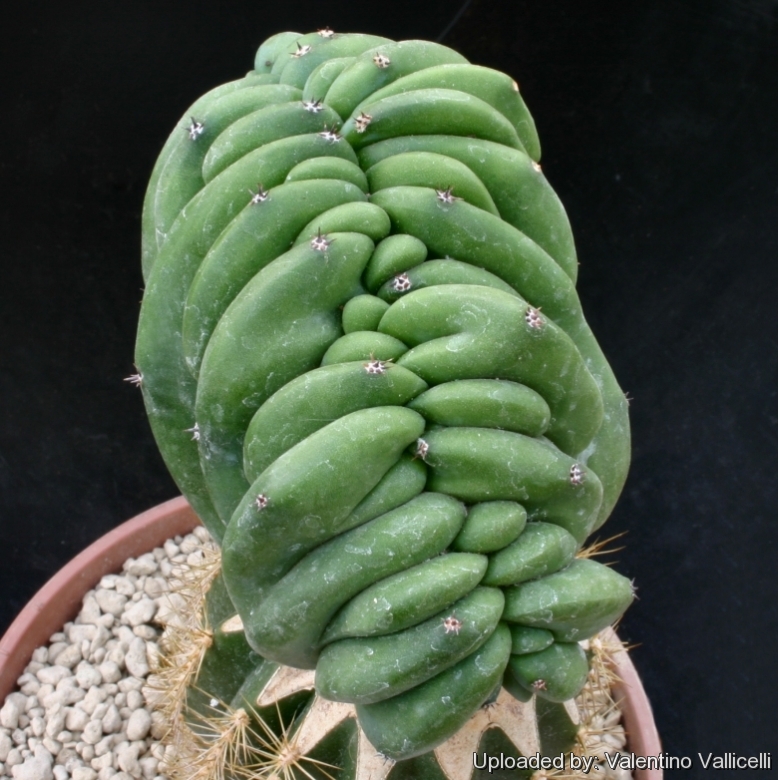 Description: This is a beautiful crested cactus that always make a spectacular attraction. It forms a stable architectural crest with subsequent, fan-like growth just clustering over one another. It is less common in cultivation than the very similar Myrtillocactus geometrizans f. cristata, it is also a little larger and of a darker green-blue colouring.
The standard Myrtillocactus cochal is a large sprawling shrub or small tree with many compact, candelabra-like branches from a short woody trunk, 1-4 m in diameter and tall.
Stem: Trunk short, woody up to 30(-40) cm in diameter. The branches are slender, all nearly uniform in size up to 9 cm in diameter, erect or recurved inward in graceful arcs toward the centre of the plant, generally bluish-green in colour and have 6-8 obtuse ribs separated by shallow intervals.
Areoles: 1-3 cm apart.
Central spine: 0 to 1 longer greyish to black up to 2 cm long.
Radial spines: 5, shorter of the same colour 5-15 mm long.
Flowers: Nocturnal and diurnal (closing late in the morning when temperatures raises), scented, 2,5 cm long and in diameter. Tepals, oblong, few (about 16) yellowish-cream to light green, the outer ones often tinged purple; filaments white; stygma lobes 5-6 white.
Blooming season: In habitat plants flower throughout the year, while plants cultivated in temperate climate usually flower only during the favorable growing season mainly in early summer.
Fruit: Edible, spineless, red often tinged yellow or brown, juicy, slightly acidic, globular 12-18 mm in diameter which look and are used like currants. 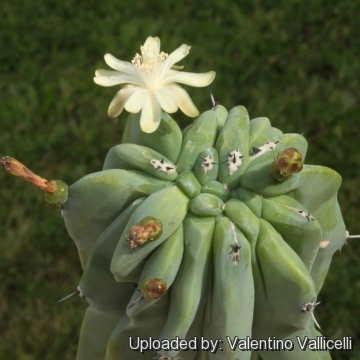 Cultivation and Propagation: This crested form of Myrtillocactus cochal is regarded as slow growng but quite easy in cultivation. It can tolerate prolonged exposure to direct sun light, but it is often grown in filtered light especially during the hottest summer days. It is often seen as grafted plant, but may grow very well on its own roots, too.
Use mineral well-permeable substratum with little organic matter (peat, humus). Water sparingly from March till October and keep perfectly dry in winter at temperatures from 10 to 15 degrees centigrade. (In general these plants are more tender and cannot endure freezing temperatures tha other Myrtillocactus) In the rest period no high atmospheric humidity!!
Propagation: Cuttings or grafting onto column-shaped cacti.