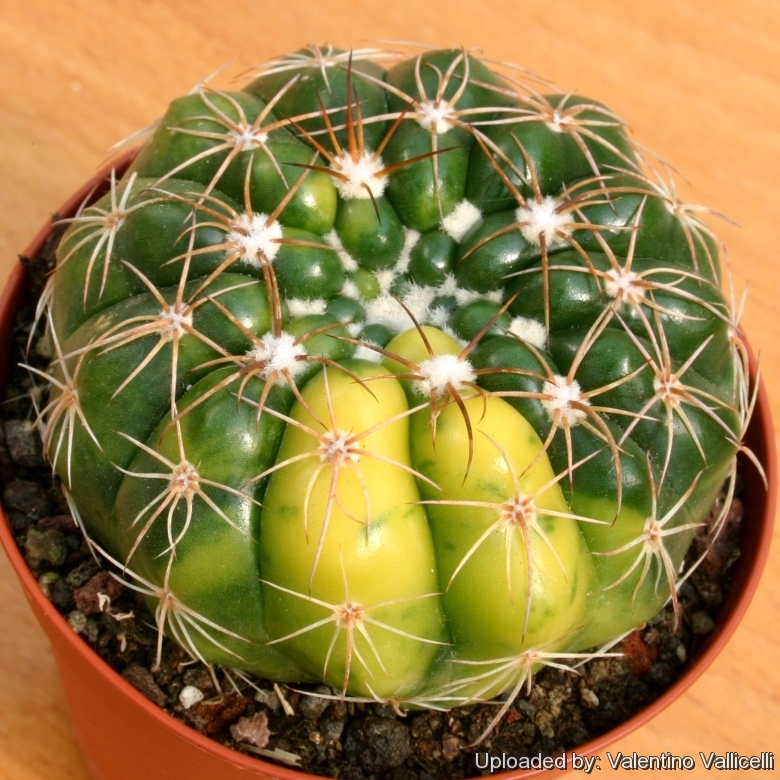 Description: Variegated Parodia werneri (syn: Notocactus uebelmannianus) are very rare in cultivation and some of these variegated plants are particularly priced by collectors. All variegates are mutants. Something has gone wrong with the cellular structure of the growth tip (apical meristem) of the plant. As a result of this mutation, chlorophyll is missing from some or all layers of the plant epidermis. The odd variegate appears in many seedling batches in a small percentage (especially among hybrid seeds) and are generally separated from normal plants. Variegated plants grow slower and are generally smaller than non-variegates of the same species. Coloured areas are also generally weaker, and more susceptible to fungus, sunburn and other defects. A large well grown variegate Parodia is truly an achievement. These are harder to grow well than they appear.
Habit: The standard Parodia werneri is a nice cactus usually solitary, sometimes branching basally to form small clumps. It has glossy green body with appressed spines and bears a ring of the most amazing magenta to royal purple flowers every spring.
Stem: Shiny dark green with sectors, patches or stripes with distinct shades of yellow or orange, globular or short/squatty up to 12 cm tall and 17 cm in diameter.
Ribs: 12-16, flat, round, more ore less chinlike.
Areoles: Round, large, dull white or creamy white-felted, each with a shallow groove below.
Central spines: Usually absent.
Radial spines: About 6 spider-like, 10 to 30 mm long, appressed against the stem body, one pointing downward, unequal, white to greyish.
Flower: Small about 5 cm in diameter, short funnel-form, shiny, wine red to deep magenta of various tones, or pure yellow (Parodia werneri f. flaviflora). Both purple and yellow flower colours can exist side by side in some populations and the yellow being the most abundant. Therefore the more commercial but less representative purple flowered form was made the species and the more typical yellow flowered the variety.
Blooming season: Spring to early summer, once it reaches about 7 cm in diameter if kept well it will flower every year.

Subspecies, varieties, forms and cultivars of plants belonging to the Parodia werneri group