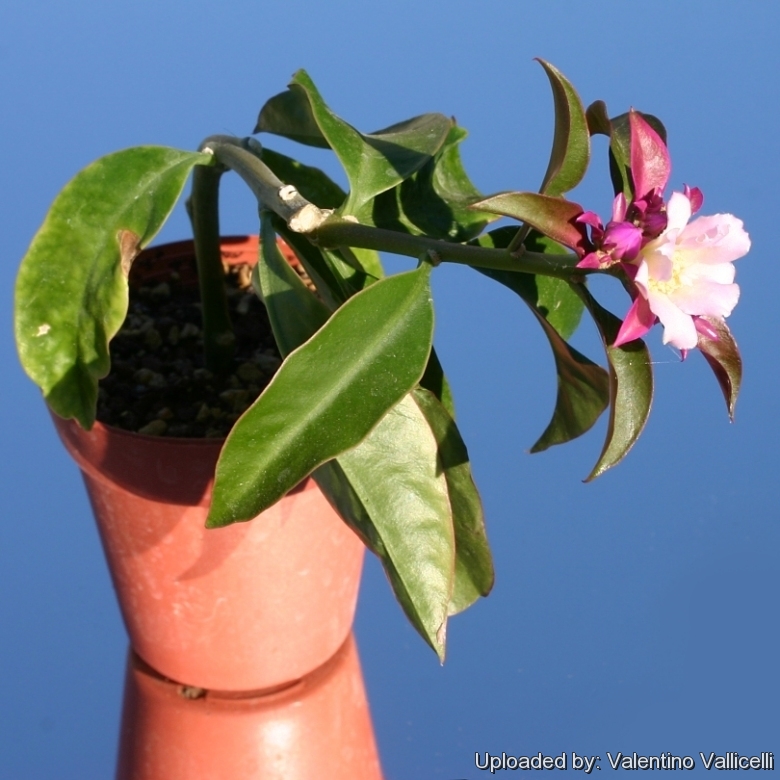 Pereskia grandifolia subs. violacea Photo by: Valentino Vallicelli
This is an odd cactus with areoles and (surprise) with woody trunk and regular leaf development and function, it is generally viewed as representing the "ancestral cactus," although its placement within Cactaceae has remained uncertain.

Description: Ever green to deciduous (depending on growing conditions) small tree or shrub, 2 to 5 m tall with a rounded crown. it is an example of a non-succulent primitive cactus.
subsp. violacea is distinguished by having purplish-pink or purple bracts and flowers. It was discovered sometime before 1972, initially described as P. bahiensis, but is only distinguished from var. grandifolia by colour.
Stem: Its main stem is upright to arching and resembles a woody plant more than a cacti, sometime it form a very spiny woody greys-brown trunk up to 1 meter tall and 10-20 cm in diameter that bears numerose branches. Twigs quite vine-like, fleshy, glabrous and green.
Areoles: White round with tiny hairs around the foliar nodes .
Spines: 1 to 8 up to 4 cm long, very sharp, acicular arranged in clusters or spreading but usually absent on new growth. On the older stems and trunk the spine are more robust and numerose (Up to 90) and up to 6,5 cm long. It is however quite variable, some plant have spines, but others have none at all.
Leaves: Thick but fleshy, variable in size, elliptic to oblong lanceolate 5-15 cm long, somewhat pointed narrowing toward the base into a short petiole. Venation pinnate and prominent below.
Flower: Very shovy rose-like, 3-5 cm in diameter lasting for 2 days, sepals green, petals usually pink or purplish (but also white or tan) in short few flowered terminal panicles, centered by yellow stamens with red filaments, the stigma and style is white. Ovary bearing large leaves.
Blooming seson: Flowering is during warm months and fruit is born by the flowers.
Fruit: 4-10 cm long, red, green or (usually) yellow coloured pear-shaped and more or less triangular. This fruit is a curious proliferating structure, bearing 3-4 cm long leaves, which ultimately fall away, looking more part of the stems than actual fruits. Several may seeded fruit are attached at a single peduncle. It smells good and is considered by some edible only at full ripening (otherwise it is very astringent)
Seeds: Black.

Subspecies, varieties, forms and cultivars of plants belonging to the Pereskia grandifolia group

Notes: Unusual in Collections Pereskias are really not very well-known and usually found only in botanical gardens. The real reason for their rarity has something to do with the fact they need highly a tropical climate to prosperate. Yet, they are very interesting plants 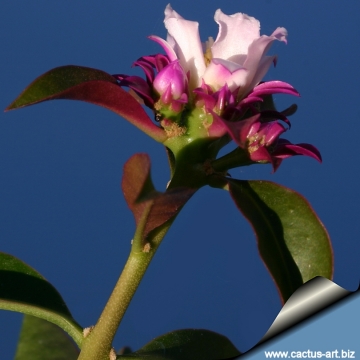 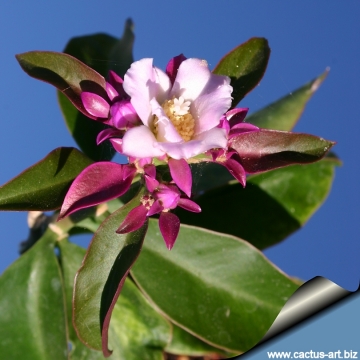 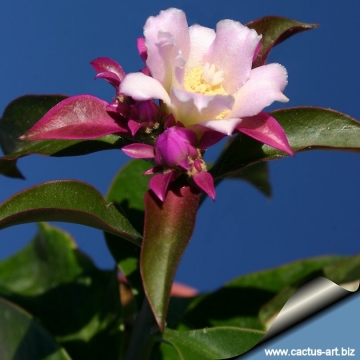 Cultivation and Propagation: Nearly indestructible. The plant requires full sun or light shade (but withstand dense shade) and well drained soils, preferably rich neutral organic soils, but may tolerate acidic ones. Drought resistant, regular water during the growing season for better growth, leaves drop during drought. Semi hardy to -3°C. Deciduous below 4°C.
Propagation: It's very easy to propagate from cuttings or seeds, contrarily to most other cacti, Pereskia cuttings should be planted immediately without a dry out period. (you can also let them sit in a jar of water)
Uses: Often used for edges it is planted by pushing cutting into the ground, its spiny stem soon forming a capital barrier. Fruit are sometime eaten. The leaves are used in green salads, or can be cooked.