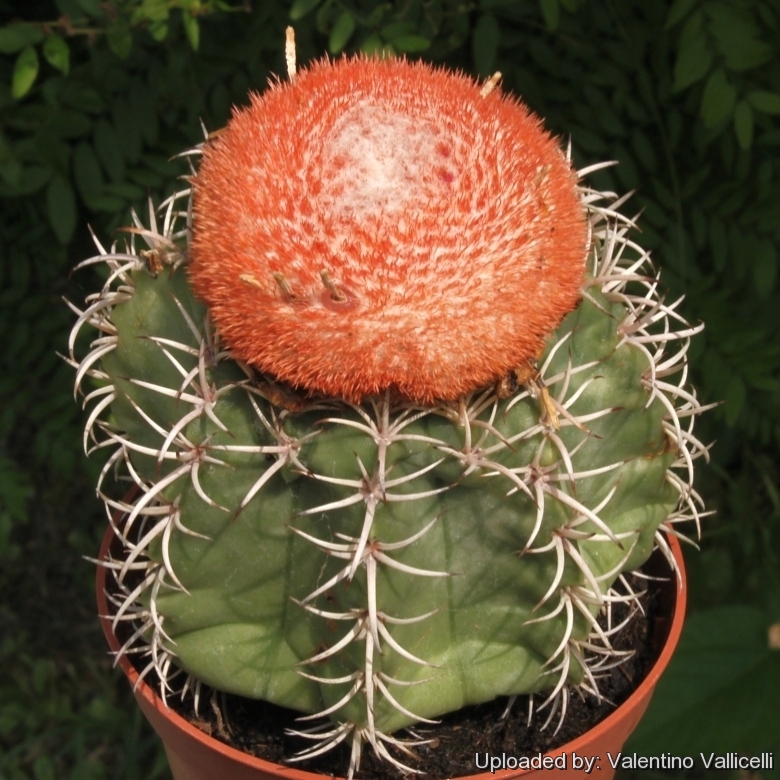 Origin and Habitat: Northern Cuba (Matanzas and Las Villas Provinces).
Habitat: It is restricted to the coastal scrublands on serpentine outcrops among low xerophytic vegetation. This species is Critically Endangered. The major threat for this species is habitat degradation by forestry activities.

Description: Melocactus matanzanus is one of the smallest and most popular species that produce its cephalium (the structure, where the flower buds will form) and flower when quite young. It is perhaps the best and more commonly grown species. Plants of this genus attract more attention in collections than those of any other cactus genera.
Habit: It is a single stemmed perennial succulent plant with determinate growth (in which the axis does not continue to elongate indefinitely being limited by the development of the cephalium).
Stem: Spherical or slightly depressed, pale green, 8-9 cm high, and 8 to 9 cm thick. When the plant has reached a certain age it shows at the growing tip a cephalium .
Ribs: 8-9 (rarely up to13) acute.
Cephalium: Cap-like, globose to shortly cylindrical, (hence the common name of "Turk's Cap") 4-6 cm in diameter, 5-9 cm tall covered by tightly peaked areoles that bear wool and dense orange-red bristles.
Areoles: About 8 mm apart.
Radial spines: (5-)7-8(-9), recurved, up to 2 cm long, but usually less than 1,5 cm long.
Central spine: 1 ascending, curved, about 1,5 (rarely to 2,4) cm long, white, creamy-white to brownish, becoming grey or whitish.
Flowers: Small, rose pink to carmine, about 2 cm long, similar in form to Mammillaria flowers. They do not emerge fully from the cephalium.
Blooming season: The flowers arise annually in mid summer from the cephalium in a ring. The flowers are diurnal and opens for a few hours at about lunchtime. It starts flowering in 4 to 5 years.
Fruits: Clavate berry, 1 to 2 cm long pink to lilac-pink. Ripened fruits are present on the cephalium.
Seeds: 1 mm.
Similar species: For its small dimension and short recurved spines recurved Melocactus matanzanus is similar in shape with the Melocactus concinnus and Melocactus braunii of Brazil)

Subspecies, varieties, forms and cultivars of plants belonging to the Melocactus matanzanus group 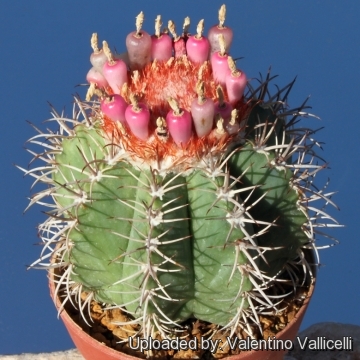 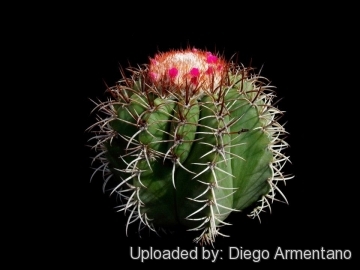 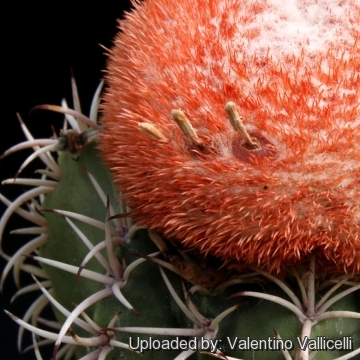 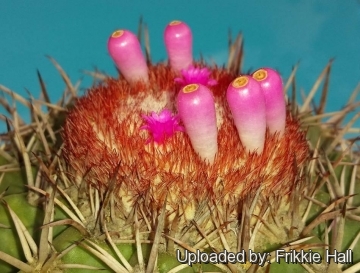 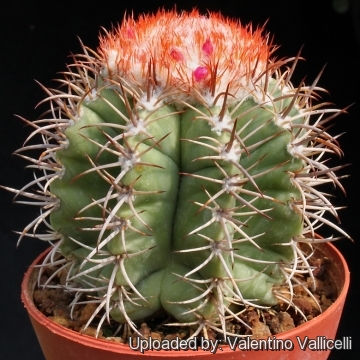 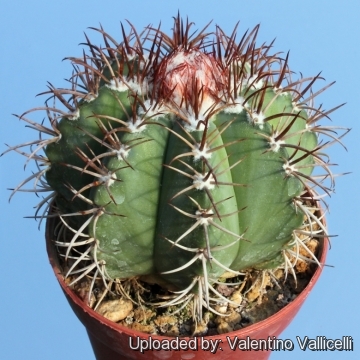 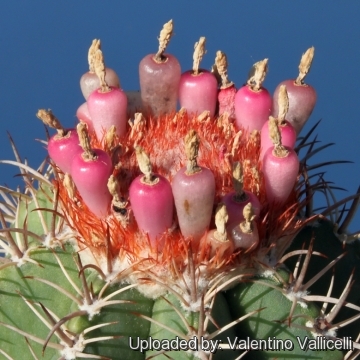 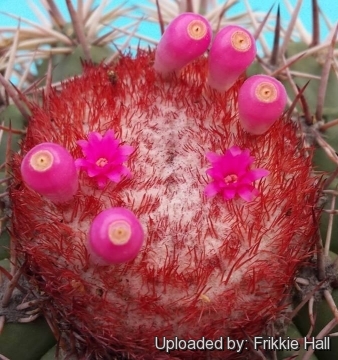 Cultivation and Propagation: These tropical cacti are not the easiest things to grow and aren’t plants for beginners.
Growth rate: It is a relatively rapidly growing given the best conditions.
Soils: It likes very porous standard cactus mix soil.
Repotting: The root system is weak and generally resents being repotted and can take a long time to re-establish. Use pot with good drainage.
Light: They prefere very bright light, not as much as the most arid growing cacti, but plenty nonetheless. Tends to bronze in strong light, which encourages flowering and heavy spine production.
Watering: Melocacti grow from April to October and cannot endure long stretches of total dryness, and also too much water will rot them, as their weak root systems tends to be inefficient at sucking up water from wet soil. Nonetheless, again as a result of their tropical origins, they need a fair amount of water, but allow the soil to dry quite a bit before watering again.
Fertilization: Do not feed in winter.
Hardiness: Melocactus rest from October to April but can’t stand cold, or even fairly cool temperatures, so is indispensable to keep them above 8-12°C at all times, severe damage or death occurring at temperatures that the great majority of cacti wouldn’t mind in the least and prefer more frequent water in winter than other cacti, say once a month. (but hardy to 4 C ° C for short periods). However warmth throughout the year will increase the grower's success (minimum 12° to 20° C during rest season).
Pests & diseases: It may be attractive to a variety of insects, but plants in good condition should be nearly pest-free, particularly if they are grown in a mineral potting-mix, with good exposure and ventilation. Nonetheless, there are several pests to watch for:
- Red spiders: Red spiders may be effectively rubbed up by misting the vulnerable plants every day
- Mealy bugs: Mealy bugs occasionally they develop aerial into the new growth among the wool with disfiguring results, but the worst types develop underground on the roots and are invisible except by their effects.
- Scales: Scales are rarely a problem.
- Rot: it is only a minor problem with cacti if the plants are watered and “aired” correctly. If they are not, fungicides won't help all that much.
Propagation: Exclusively by Seeds. Sow in February-march in a light, sandy, porous soil. Cover germinating tray with glass to prevent seed from drying out. Germination is most successful at a temperature of 18 to 22° C.