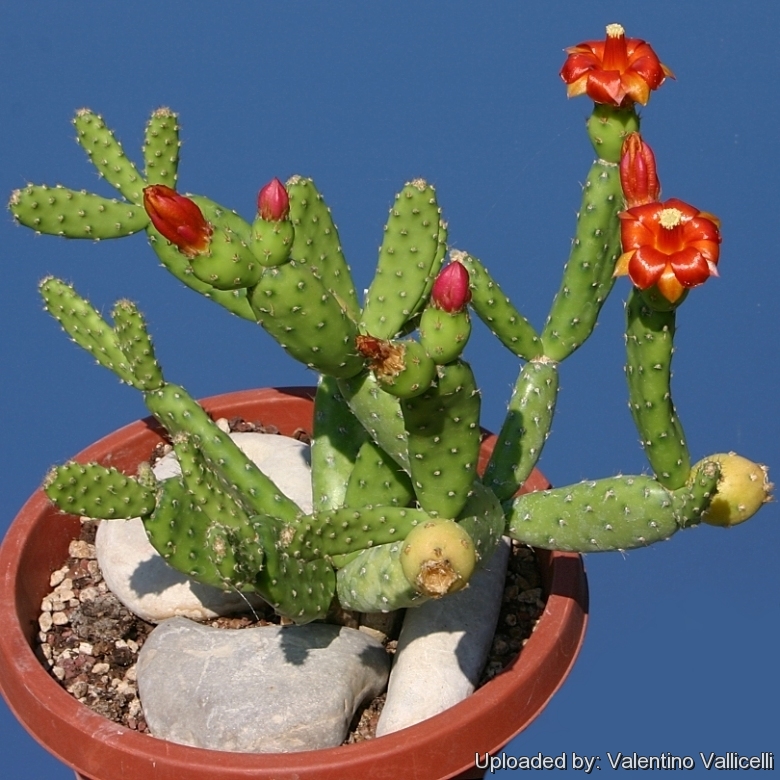 Origin and Habitat: Alagoas, Bahia, Ceará, Paraíba, Pernambuco, Rio Grande do Norte, Sergipe (Brazil Northeast, Brazil, Southern America). There are no more than 1,000 mature individuals of Tacinga subcylindrica, with less than 100 individuals per subpopulation. The extent of occurrence is approximately 3,700 km2, the population is severely fragmented, and habitat quality as well as the number of mature individuals are declining.
Type Locality: Mun. Muritiba, district of São José do Itaporã, Pau-Ferro, Fazenda Oito de Dezembro.
Altitude range: 200 to 450(-1,020) metres above sea level.
Habitat and Ecology: Tacinga subcylindrica is endemic to the arid regions of Caatinga agreste and carrasco in the northeast Brazil. It is frequent on deep sandy substrates but not restricted to these. Generation length is 7 years, taking into account plants from seeds as well as clonal reproduction. It can be found growing together with Tacinga inamoena in Bahia. The main threats to the species are collection as well as habitat destruction by mining and deforestation for agricultural purposes. Collection by local people for sale, among other threats, has led to a population decline.

Description: Tacinga subcylindrica (Tacinga inamoena subsp. subcylindrica) is a dwarf opuntia-like cactus that soon forms dense clusters, but the stems are cylindrical (without glochids!) and has only a few occasional short bristle-like spines. It produces a profusion of attractive bright reddish orange flowers followed by large globular fruit, even in cultivation. It is strictly related to Tacinga inamoena and previously considered a subspecies of it, but is much smaller and geographically isolated. This former subspecies is quite distinct from subsp. inamoena, morphologically uniform over a number of populations and was promoted to species level (Menezes et al. 2011). The two former subspecies can be found growing together in Bahia and Ceara.
Derivation of specific name: The name is due to the almost cylindrical cladodes.
Areoles: This species has glochids as any other opuntioid, but the glochids are sunken in the areoles and are mostly unnoticeable - they do not come out if you touch the plant.
Flower: Rich orange pollinated by the hummingbird. 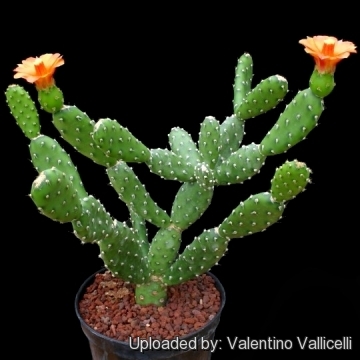 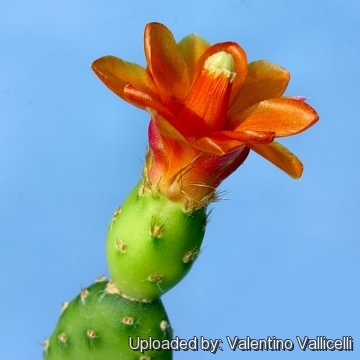 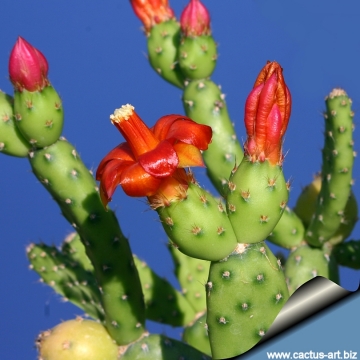 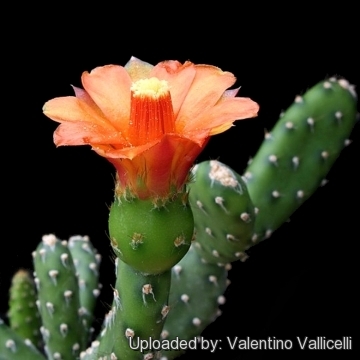 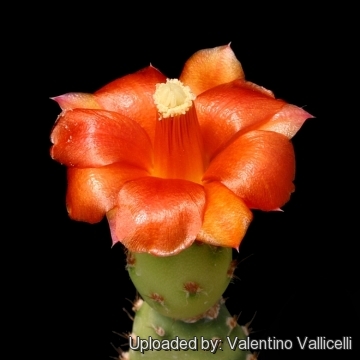 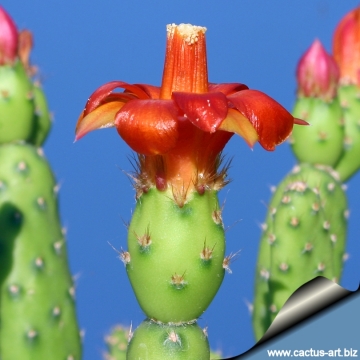 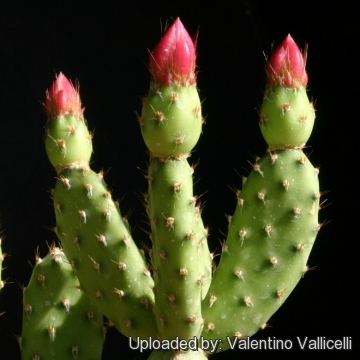 Tacinga subcylindrica Photo by: Valentino Vallicelli
Send a photo of this plant.

Cultivation and Propagation: It is a species of easy culture, recommended for any collection that needs lots of light with ample airflow. If grown correctly, it will reward the grower with generous displays of flowers.
Soil: Use a very porous mineral-based potting mix, with excellent drainage, as can be achieved by the addition of extra perlite or pumice.
Watering: Water regularly in summer, but do not overwater. Water thoroughly only if soil is dry to the touch, let soil dry in between to prevent root rot, keep dry in winter. Care must be taken with watering as they tends to become swollen and untidy in growth habit if given too much water and shade.
Fertilization: Feed with a high potassium fertilizer in summer.
Sun Exposure: High levels of light are needed to flower. Can be sunburned if moved from shade/greenhouse into full sun too quickly. During the spring it may be able to take full sun until the heat arrives at the end of spring. In an area that has hot afternoon sun, it may be able to take full morning sun, but requires afternoon shade or afternoon light shade.
Hardiness: Keep it around 5° C in winter, but it is not frost resistant. A resting period in winter and strong light are necessary so that it can flower properly.
Pest & diseases: Sensitive to red spider mite. Overhead watering is helpful in controlling mites.
Propagation: Herbaceous stem cuttings (Allow cut surface to callus over before planting).