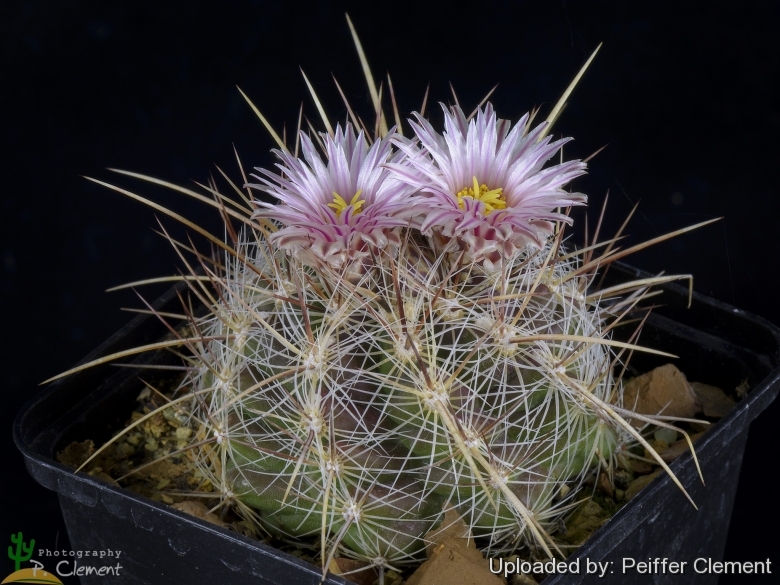 Origin and Habitat: It is endemic of the Sierra de las Ovejas near Cuatro Cienegas in Coahuila, Mexico, Northern America. (It is the only Thelocactus species in Coahuila)
Type locality: Sierra de las Ovejas, Coahuila, Mexico.
Altitude: 800 to 1500 metres above sea level.
Habitat: It grows in xerophytic shrubland on calcareous soil among limestone rocks and plates, mostly in rock crevices where there is no accompanying vegetation, within the Central Chihuahuan subregion of the Chihuahuan Desert ecoregion. Plants are exposed to full sunlight, and endures daily maximum temperature above 50 ° C, and winter lows temperatures below freezing point.

Description: Thelocactus lausseri (not to be confused with Thelocactus sausseri which is the same species as Thelocactus conothelos) is a small sized species with a rather tight spination reminding of Thelocactus bicolor which has different flower size, flower colour and flowering periods.
Distinguishing traits: This species has peculiar, very small flowers (the smallest of the genus) which are white, with a pinkish central stripe and looks surprisingly like those of some species of Stenocactus.
Habit: Usually solitary.
Stem: Spherical to short ovoidal, 7-10 cm tall, 5-8,5 cm wide, grey-green, divided into ribs,.
Ribs: 8-10, distinct, slightly spiraling.
Tubercles: Rounded , prominent, 5-9 mm wide, 8-12 mm high.
Areoles: Round, 5-6 mm in diameter, without glands.
Central spines: 4-(6), 6-10 cm long, and up to 2,5 mm broad at the base, brownish, reddish, ochre, yellowhis or whitish, becoming greyish, straight or slightly curved, acicular.
Radial spines: 20-22 (rarely up to 25), 18-28 mm long, about 1 mm thick, silvery-white to yellowish, addpressed or slightly protruding, never erect, straight or slightly curved, acicular.
Flowers: Almost apical, from younger areoles, very small, funnel-shaped, 25-45 mm long and wide (mostly about 3,5 long and in diameter), whitish to pale pink with a darker brownish-purple midvein, quite similar to that of some species of Stenocactus. Inner tepals narrowly lanceolate, to 25 mm long and 3 mm wide, pointed, whitish to pinkish colour with strong central pink stripe. Pericarpels scaly.
Blooming season: The plants start forming buds already in autumn, and the first flowers appear plentifully from the end of January to the end of February.
Fruits: Scaly, dehiscing at maturity by basal pores.
Seeds: 1,7-2 mm long, 1,2 mm wide, warty testa cells convex. 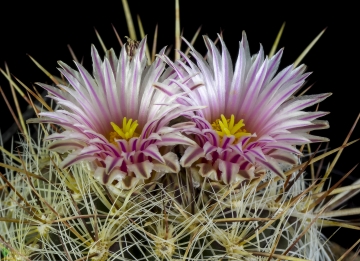 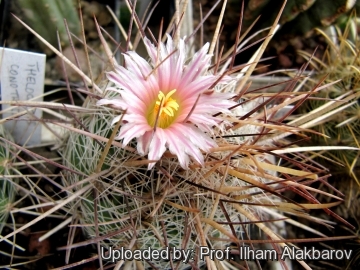 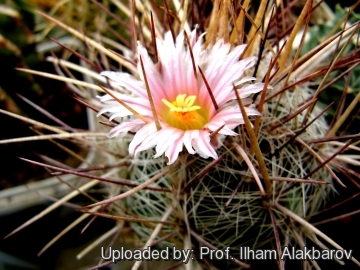 Thelocactus lausseri Photo by: Prof. Ilham Alakbarov
Send a photo of this plant.

Cultivation and Propagation: Thelocactus lausseri is a summer-growing species of relatively easy cultivation. This plant is extremely xerophytic, adapted to very dry soils and is quite susceptible to over-watering if kept in a non ventilated place.
Growth rate: Slow-growing.
Soil: Grow it in an open mineral, sandy-gritty cactus compost and provide a very good drainage.
Exposure: It is suited for sunny-brightly exposure, but can tolerate light shade. However it will do its best only with lots of sun and become stressed with inadequate light which could result in poor growth and unnatural shape. It has a good heat tolerance.
Watering: Water sparingly and keep it completely dry during winter. Mature individuals easily rot and die especially after transplanting so be extremely cautious with watering. Keep dry in winter or when night temperatures remain below 10° C. Water it less than average if in bigger pots.
Fertilization: Feed them once during the growing season with a fertilizer specifically formulated for cactus and succulents (high potash fertilizer with a dilute low nitrogen), including all micro nutrients and trace elements diluted to ½ the strength recommended on the label. They thrive in poor soils and need a limited supplies of fertilizer to avoid the plants developing excess vegetation, which is easily attacked by fungal diseases.
Special need: It is suited for airy exposures. Provide very good ventilation. Nearly all problems occur as a result of overwatering and poor ventilation, especially when weather conditions are dull and cool or very humid. They must have very dry atmosphere.
Hardiness: It likes warmth (recommended minimum winter temperature 5° C) But plants kept perfectly dry can easily survive to frequent moderate frost, above approx -7° C.
Pests & diseases: These cacti may be attractive to a variety of insects, but plants in good condition should be nearly pest-free, particularly if they are grown in a mineral potting-mix, with good exposure and ventilation. Nonetheless, there are several pests to watch for:
- Red spiders: Red spiders may be effectively rubbed up by misting the plants from above.
- Mealy bugs: Mealy bugs occasionally develop aerial into the new leaves and flowers with disfiguring results, but the worst types develop underground on the roots and are invisible except by their effects.
- Scales, thrips and aphids: These insects are rarely a problem.
- Rot: Rot is only a minor problem if the plants are watered and “aired” correctly. If they are not, fungicides won't help all that much.
Propagation: Nearly always from seed, since the plant rarely produces plantlets. The seeds can be sown in pots of fine, well-drained sandy soil, any time during the spring when temperatures are warm. Cover the seeds with a fine layer of grit and water from below with a fungicide to prevent damping off. For the 1-2 weeks cover the pots with a sheet of glass/clear perspex to keep the humidity levels high. Remove the glass and replace it with light shade-cloth and mist once or twice a day for the next two weeks after which most seeds should have germinated. From then on mistings can be reduced to every second and then every third day as the little plants grow. The seedlings should not be disturbed until they are well rooted after which they can be planted separately in small pots. Sometimes it is grafted to avoid root rot problems as plants grafted on an hardy stock are easy to grow and no special skill is required.