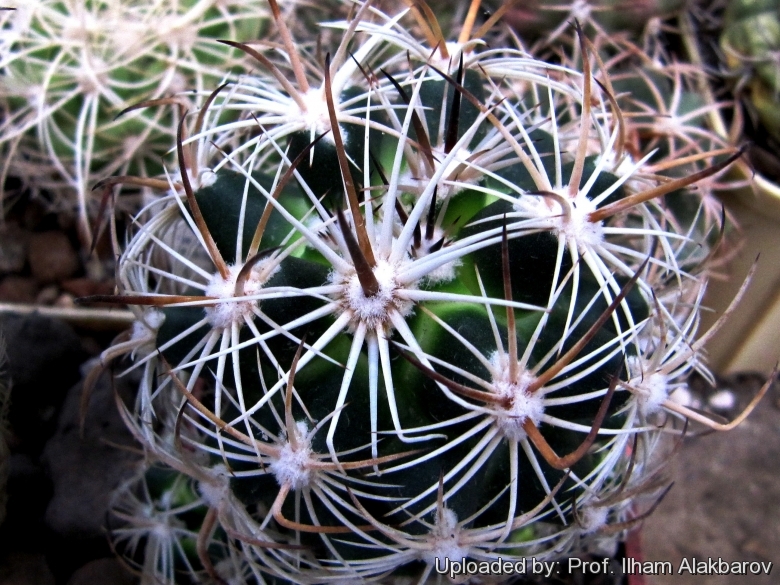 Origin and Habitat: Northwestern Arizona and southwestern Utah along the Utah-Arizona border. Currently, this cactus sparsely populates a narrow band stretching from southeast of Fredonia (Coconino County) west into north-central Mohave County, Arizona, a distance of 100 Km (in the area of Pipe Springs National Monument) and at a few places in Washington and Kane County, Utah. This band is only 50 km wide, and as of the mid 1980's, contains about only 7,000 individual plants of the species.
Altitude range: 900 to 1,600 metres above sea level.
Habitat and ecology: This cactus grows on a highly specific soil type the gypsum- and calcium-rich soils of barren rolling hills, and sandy soils of the Moenkopi Formation on salt desert scrub dominated by Atriplex. Pediocactus sileri stems tend to develop a basal thatch of spines that anchor it to the fine, gypsum-rich soil. The reproduction commonly occurs via cross-pollination, involving specific pollinators such as the native Anthophora and Ashmeadiella bees. Pediocactus sileri has a relatively small range, however only parts of it are threatened, it is protected and managed. The main threats are gypsum strip-mining, grazing and trampling animals stepping on plants, overcollection, and mining. The current trend of the population is decreasing, mainly as a result of droughts.

Description: Pediocactus sileri is an exceptionally rare plant long cherished as a Utahia sileri and found to be rather difficult in cultivation, but nevertheless much sought after. It is a solitary or, less commonly, few-branched cactus measuring up to to 25 cm tall and nearly 12 cm in diameter, making it one of the larger plants in the genus. It is similar to Pediocactus simsonii, but all of the spines have thick bases. 3 central, erect spines are brown or blackish, but lighten to a white colour with age, while the 8-15 radial spines are similar to the central ones but white or pale grey and about half as long straight or slightly curved. Although numerous, the spines only hide about half of the blue-green stem. During the spring, bright greenish yellow flowers about 2.5 centimeters in diameter will bloom and produce greenish yellow fruit. This plant does not shrink significantly in summer or winter as so many other plants in this group do.
Diagnostic characters: In this species the scales of tube and outer perianth-segments are conspicuously ciliate.
Derivation of specific name: Sileri is named for Andrew Lafayette Siler, a 19th-century rancher and plant collector.
Stems: It usually does not cluster. Depressed-hemispheric or at times elongate-cylindric, 5-15(rarely to 25) tall, 6-12 cm broad with pronounced tubercles. Tubercles 9-15 mm long, 6-11 mm wide.
Areoles: Large, circular to pyriform, persistently white-felty.
Central spines: 3-7 per areole, 13-30 mm long, 1 mm wide at base, brownish black at least above, the bases sometimes white when young, ageing to pale grey or white, stout, rigid, not flattened, nearly straight or slightly curved.
Radial spines: 11-16 per areole and white, 11-21 mm long. Spines around the base of the cactus may help to anchor it to the soil.
Flowers: Greenish yellow about 1.8-2.2 long, 2-3 cm across, and the spines do not allow them to fully open. Scales on hypanthium long fringed. Outer perianth segments brown, with white margins, and conspicuously fringed 9-15 mm long, 3-4.5 mm wide. Inner perianth segments yellow or yellowish, with purple or maroon veins, 15-20 mm long, 4.5-6 mm wide.
Blooming season: Spring (April and May).
Fruits: Dry, greenish yellow, cylindrical, short cylindric, 12-15 mm long, 6-9 mm broad, the scales finally deciduous.
Seeds: Grey to nearly black, 3.5-5 long, 3-3.5 mm thick, papillate and rugose.

Subspecies, varieties, forms and cultivars of plants belonging to the Pediocactus sileri group

Notes: Disambiguation notes courteously provided by Mr. Dorde W. Woodruff, Salt Lake City, Utah, USA
The fact that Mr Siler of Southern Utah was the first to collect both Pediocactus sileri and Sclerocactus sileri, different species, in the 1800s, is a cause of some confusion....
...The only synonyms for Pediocactus sileri, apparently, are Utahia sileri and Echinocactus sileri. This cactus is quite distinctive, larger and coarser than some of the other Pediocacti. The dark spines and the wooly areoles are distinctive even on an herbarium sheet. And it only grows on that peculiar badlands clay soil, farther west than Sclerocactus sileri.... ....
Sclerocactus sileri is a different case, harder to distinguish when not blooming from the other small Sclerocacti, because it's not so different-looking. That's probably why it has had several other names. Being so isolated, it probably does deserve its own name... ...Sclerocactus sileri grows to the east of Pediocactus sileri, in red sandy soil. It's a smaller plant, and scattered, as the small species of Sclerocactus tend to be, though it has more locations than we knew of in the 60s, when I first found it...
...As noted in the online version of The Flora of North America, Ken Heil and Mark Porter claim that there is no support for this species being placed in either Sclerocactus pubispinus or Sclerocactus whipplei. 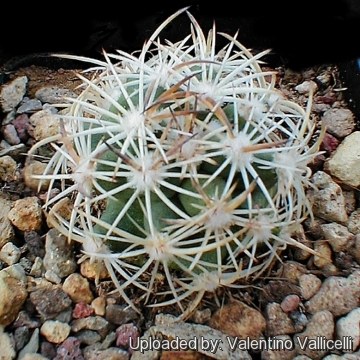 Cultivation and Propagation: Pediocactus sileri is a very rare cactus, rot prone and not the easiest species to grow on it's own roots in cultivation it need a well drained, porous soil is preferred. As the common name implies, this specialized species grows only in gypsum soil. Partial shading, especially during the hottest part of the summer, is helpful. Water should be provided in late winter, early spring (the main growing season), and also in Autumn, when flower buds are produced and it starts growing again. Do not l water during the winter seasons. Problems with this plants are most likely to result from improper watering. Too much water and the plant may rot; too little water may result in poor vigor or even death. They are good for outdoor cultivation in raised beds, rock gardens, balconies, window sills etc..Hybrids between Pediocactus sileri and Navajoa are particularly outstanding.
Frost Tolerance: Winter hardy from to -12° C (or less)
Propagation: Seeds. Temperature for optimum germination: night minimum approx 17 day maximum to near 40 C at any time of year with proper temperatures and daylength (ca.13-14 hours); it is possible to extend day-length with artificial lights. Anyway the seeds germinate slowly with difficulty and a low rate of success (But germiation is comparatively easy if compared with other Pediocactus and Sclerocactus species and often new seedling cluster spontaneously around the plant every year), scarification and stratification help, alternate freeze and thaw both wet and dry, but don’t keep wet, alternate wet and dry with changing temperature.
Germination can take several years so keep pot and try again next year. Seedlings do not do well either, and some die each year, for this reason plants are commonly grafted on hardy stocks like Opuntia humifusa or Echinocereus triglochidiatus in this case they are easy to grow and no special skill is required.