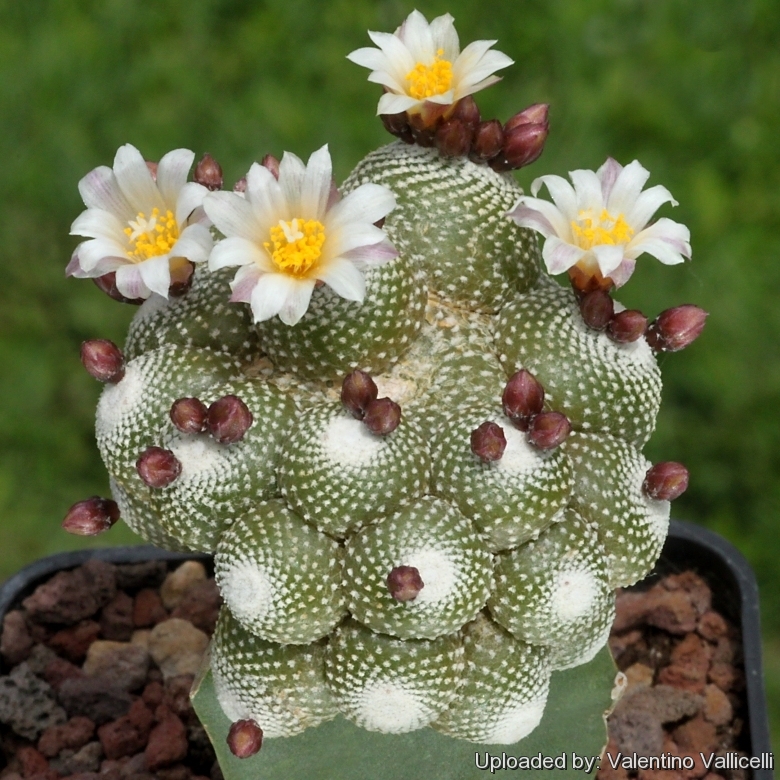 Origin and Habitat: Blossfeldia liliputiana is established over a wide geographical area ranging from Southern Bolivia (Potosí Department) to north-western Argentina (Jujuy, Salta, and Catamarca Provinces), at elevations of 1200 to 3600 m.
Habitat: Plants are found growing on rocky slopes and often between cracks in the sides of vertical stone cliffs mainly on shale like rock formations often close to waterfalls where they have a almost continous water flow running over them, but can withstand severe drying out and (in habitat) they can to survive nearly complete desiccation, recovering when fog, mist or rain returns to their natural environment.

Description: Blossfeldia cyathiformis nom. nud. is one of several unpublished names of Ritter that still occur in commercial lists and now included in Blossfeldia liliputana. It is a solitary or clumping miniature cactus, with no rib and no spines.
Stem: Flattened disc-shaped, gray-green, usually up to 1,2 cm in diameter (rarely exceed the 2, but in cultivation grafted plants may attain a bigger size.
Ribs: Bodies have no ribs or tubercles.
Areoles: Spiralling bearing tufts of wool and no spines.
Root: Tuberous.
Flower: Diurnal, cream-coloured diurnal, 6-15 mm long and 5-7 mm diameter and self fertile.
Flowering season: Summer.
Seed: The seeds are minuscule ( like dust )

Bloosfeldia is a poikilohydric and almost astomate succulent:
This remarkable miniature is the most enigmatic of all cacti, confounding us with its physiological, anatomical, morphological, ecological and evolutionary peculiarities. They are apparently the only cacti that are capable of completely drying out and then rehydrating their cells when watered (called "poikilohydric"). It has been found to lose up to 80% of its moisture in one year and then survive drought for an additional year, making it very similar to mosses and lichens in being adapted to withstand near complete loss of moisture! It could be that what looks like a few dried out and dead seedlings could be revived by a thorough soak.
Except for certain parasites and aquatics, this species possesses the lowest density of stomata of any terrestrial flowering plant. 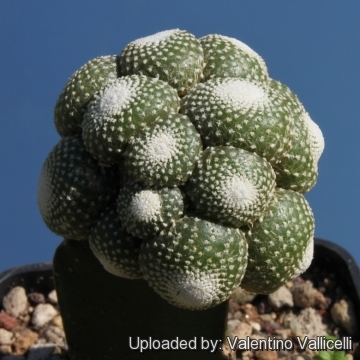 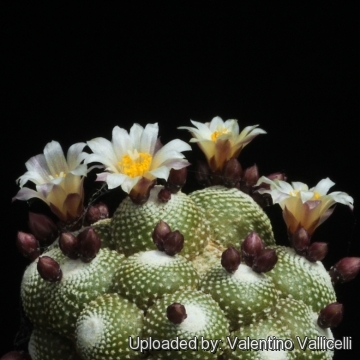 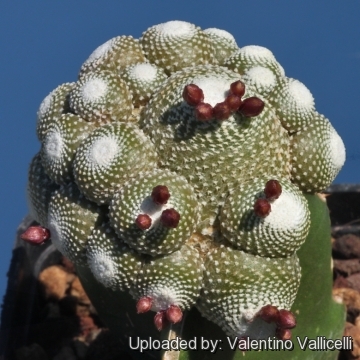 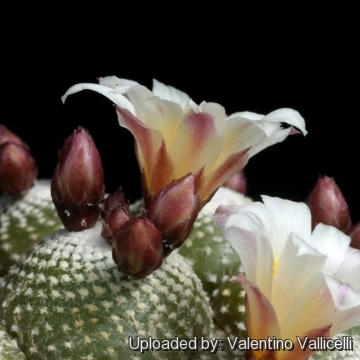 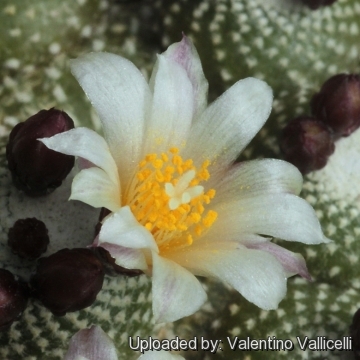 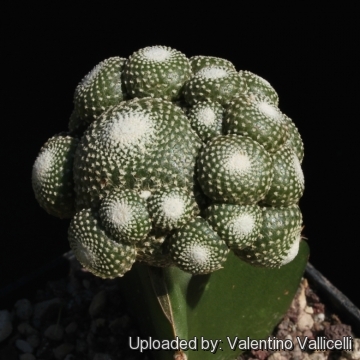 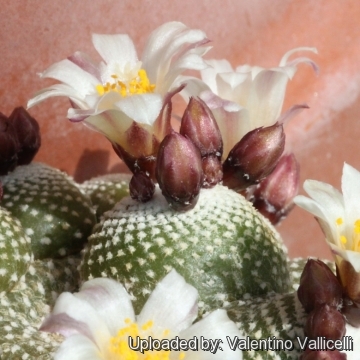 Blossfeldia cyathiformis Photo by: Valentino Vallicelli
Send a photo of this plant.

Cultivation and Propagation: Some shade is preferred and a very well draining potting mix. Frost Tolerance: At least -10°C.
Their specialized environment (mountain rock cracks), and the extremely dry environment makes them very sensitive to root loss. Because of their slow growth rate, Blossfeldias are often grafted, which causes them to grow very fast and offset heavily but lose their characteristic disc-like shape, becoming quite globular and bloated. In this case the minimum temperatures acceptable should take in account the requirements for the rootstock. Any way this miniature is grown, it is a true wonder of the vegetal kingdom.
Propagation: Seeds, grafts. The miniscule seeds should be sown on the surface of a very finely sifted soil mix. These plants are very slow growing and is very difficult to keep them alive on its own roots for the first 4-6 months and should be watered by carefully misting with a hand held spray bottle until they are large enough to be watered normally (2 to 5 years!). But the bagging is the preferred sowing method for this plant, of course, maximum sterilization is important in that method as the bag remains sealed for up to two years. We have even heard of people successfully growing this plant on a porous rock
Many growers graft tiny 2-3 month seedlings and they grow on very successfully that way.